The death toll in the Iran military parade attack has risen to 24 (update: 29), according to the Iranian state news agency IRNA.

State media said gunmen opened fire at the event in the southwest city of Ahvaz on September 22.

State television said the assault targeted a stand where Iranian officials were gathered to watch an annual event marking the start of the country’s 1980-88 war with Iraq.

An anti-government ethnic Arab group has taken responsibility in an interview with Radio Farda.

Yaghub Hur Totsari, spokesman for one of the two groups that identify themselves as the Arab Struggle Movement for the Liberation of Ahvaz, said the Ahvaz National Resistance, an umbrella organization of all armed movements.

He said that this was an act against “the oppression” of the Iranian government.

UPDATE
Reports said unknown gunmen opened fire on people from behind the stand during the parade on Saturday. https://t.co/qKmmEkyclu#Iran #MilitaryParade #Ahvaz pic.twitter.com/vH8sykZ2sL

An Iranian military spokesman claimed the gunmen were trained by two Gulf Arab states and had ties to the United States and Israel.

“They are not from Daesh (Islamic State) or other groups fighting (Iran’s) Islamic system … but they are linked to America and (Israel’s intelligence agency) Mossad.”

There were conflicting reports on the number killed in the attack.

Earlier, IRNA said a woman and a child were wounded in the attack.

Earlier reports described the attackers as “Takfiri gunmen,” a term used in the past to describe Sunni Muslim militants.

There was no immediate claim of responsibility.

Iranian Foreign Minister Mohammad Javad Zarif said on Twitter that the attackers were “terrorists recruited, trained, armed and paid by a foreign regime,” but did not elaborate.

Terrorists recruited, trained, armed & paid by a foreign regime have attacked Ahvaz. Children and journos among casualties. Iran holds regional terror sponsors and their US masters accountable for such attacks. Iran will respond swiftly and decisively in defense of Iranian lives. pic.twitter.com/WG1J1wgVD9

He blamed regional countries and their “US masters” for the attack, adding that Iran would respond “swiftly and decisively.

Ahvaz is the capital of Iran’s oil-rich Khuzestan Province. The province in the past has seen Arab separatists attack oil pipelines.

Tensions between traditional rivals Iran and Saudi Arabia have increased in recent years, with the two countries supporting opposite sides in wars in Syria and Yemen and rival political parties in Iraq and Lebanon.

Attacks on the military are rare in Iran.

Last year, in the first deadly attack claimed by Islamic State in Tehran, 18 people were killed at the parliament and at the mausoleum of Ayatollah Ruhollah Khomeini, the founder and first leader of the Islamic Republic.

3:33 PM PT: Announcing the attack before carrying it out

The "Al-Ahvaz" separatist group—which carried out the terrorist attack in #Ahvaz today—signaled the looming attack 13 hours before it was carried out with a Tweet from its (seemingly) official account:

"Al-Ahvaz will create a challenge for the Iranian occupiers with an attack" https://t.co/bJOcZJtDi5

This is a photo published by local media of Táha Eqdámi, the youngest victim of the terrorist attack in the Iranian city of #Ahvaz.
He was 4 and was supposed to go to kindergarten the next day. #IranTerrorAttack @ap @tparsi @presstv @hispantv pic.twitter.com/XZzKd4U63Y

Make no mistake: By saying that it “encourages the regime in Tehran to focus on keeping [Iranians] safe at home,” the Trump NSC is blaming the #Ahvaz terror attack in Iran itself.

This is not the language the US ever uses when it comments on terrorist attacks elsewhere.

WH NSC issues a statement on the #TerroristAttack in #Iran which does not talk about the attack nor does it directly condemn it: Garrett Marquis: “The United States stands with the Iranian people and encourages the regime in Tehran to focus on keeping them safe at home.”

Hours have passed since the terrorist attack in my birth town of #Ahvaz killed 29 people. And still not a peep out of Donald Trump. No condemnation, not even thoughts and prayers. Nothing.

9:34 AM PT: Iran’s Khamenei says attack on military parade is linked to U.S. allies via Reuters

Iran’s Supreme Leader Ayatollah Ali Khamenei said on Saturday that an attack on a military parade in southwestern Iran was linked to the United States’ “allies in the region” and ordered security forces to bring the perpetrators to justice.

“This crime is a continuation of the plots of the regional states that are puppets of the United States, and their goal is to create insecurity in our dear country,” Khamenei said in a statement published on his website.

He did not name the states, but U.S. allies in the region include Iran’s arch-foe Israel and also the Arab Gulf states, especially Saudi Arabia.

Another Legitimate target of #AhvazTerrorAttack, which most of mainstream media and news corporations refuse to adress as terrorism #ahwaz #IranMilitaryParade #iran #AhvazAttack https://t.co/7vv6NRAYek

8:30 AM PT: Condemnations by NIAC and the Iranian Canadian Congress

We condemn the recent act of terror in Ahvaz: https://t.co/eQBUKPnn3K

The ICC condemns the terrorist attack in Ahvaz carried out by a group called Al-Ahvazi. Our deepest condolences to the families of the victims and wish speedy recovery for those injured.
حمله تروریستی در اهواز را محکوم میکنیم#PrayForAhvaz#اهواز_تسلیتhttps://t.co/2aKStkRJFW

7:54 AM PT: One of the victims was a war vet in a wheelchair

7:36 AM PT: How Western media is covering this heinous act of terror

#Saudi strongman Prince Salman is a man of his word. Last year he warned that he would support attacks on #Iran: "We will work so that the battle is on their side, inside #Iran." Today Saudi-sponsored gunmen attacked a parade in #Ahvaz, killing 24. https://t.co/b0ppAvLq8h

7:25 AM PT: “A four-year-old girl and a wheelchair-bound war veteran were among the dead.” Brigadier General Abolfazl Shekarchi, a senior spokesman for Iran’s armed forces told state television.

7:24 AM PT: “The attacks are doubtlessly meant to tarnish the prestige of the IRGC, but I believe the terrorist incidents will strengthen the IRGC’s standing and even mobilize some public support,” said Ali Alfoneh, senior fellow at the Washington-based Gulf Arab States Institute.

7:22 AM PT: “Rouhani will use the terrorist attack to justify Iran’s presence in the Middle East…The attack will strengthen the IRGC’s position inside Iran and in the region,” Tehran-based political analyst Hamid Farahvashian said, according to Reuters.

President Putin voiced his country’s preparedness to assist Iran in the war against terrorism a few hours after a terrorist attack on a military parade in Iran’s southwestern city of Ahvaz.

“Please accept the deepest condolences regarding the tragic consequences of the raid by terrorists in Ahvaz. We are appalled by this bloody crime,” Putin wrote to Rouhani, according to the text of the telegram posted on the Kremlin website.

“We expect that everyone involved will face a deserved punishment,” Putin said. “This event once again reminds us about the necessity of an uncompromising battle against terrorism in all of its manifestations. I would like to confirm our readiness to continue building cooperation with Iranian partners in resisting this evil.”

An Iranian military spokesman said the gunmen who on Saturday attacked a military parade in the southwestern city of Ahvaz were trained by two Gulf Arab states and had ties to the United States and Israel, Reuters reports.

“They are not from Daesh (Islamic State) or other groups fighting (Iran’s) Islamic system … but they are linked to America and (Israel’s intelligence agency) Mossad.”

Iranian authorities “temporarily” shut down two border crossings with Iraq, according to an Iraqi customs official.

Iranian President Hassan Rouhani ordered the intelligence forces to capture perpetrators of a Saturday terrorist attack on a parade in Ahvaz, warning of Iran’s “crushing response” and pointing the finger at those providing intelligence support for terrorists.

Rouhani was briefed on the latest developments in the wake of this morning’s terrorist attack on a military parade in Ahvaz during telephone conversations with Interior Minister Abdolreza Rahmani Fazli and with Governor of Khuzestan Gholamreza Shariati.

Expressing sympathy with the families of victims of the fatal attack, the president ordered the Intelligence Ministry to mobilize all units to immediately detect the terrorists behind the attack and their links for a “decisive and exemplary” punishment.

“The Islamic Republic of Iran’s response to the merest threat will be crushing,” he underlined.

Rouhani also held those providing “propaganda and intelligence support” for the terrorists accountable for the attack.

During the military parade in Ahvaz on Saturday morning, Takfiri militants opened fired on military officials and ordinary people in the event. At least 25 people have died and 60 others injured in the terrorist attack.

A senior spokesman for the Iranian Armed Forces said four terrorists were involved in the attack, noting that they had hidden their rifles in the parade venue beforehand.

Pictures and video added by The Iranian 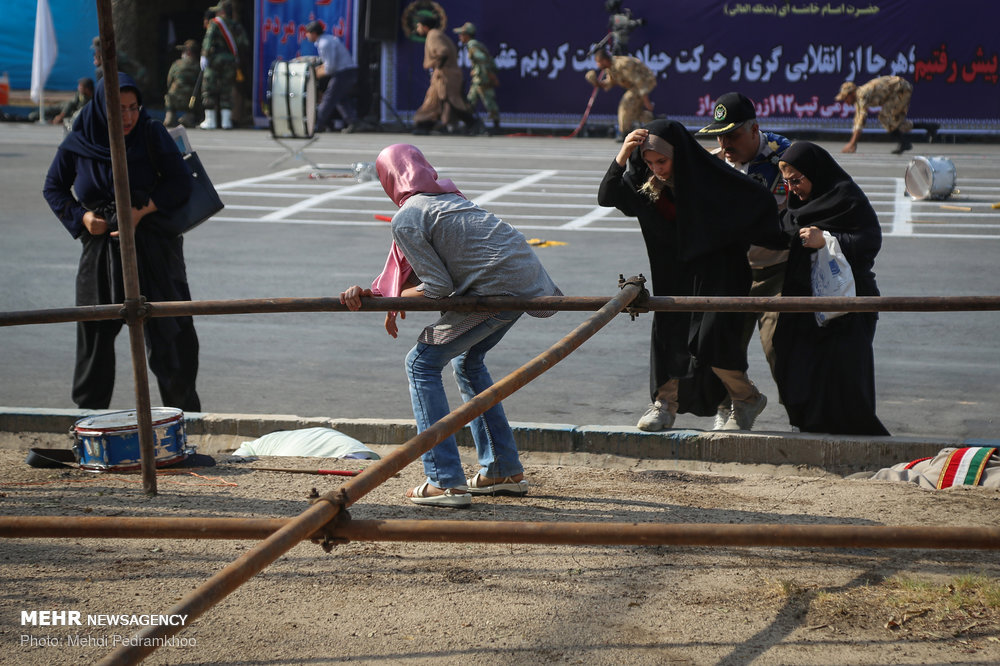 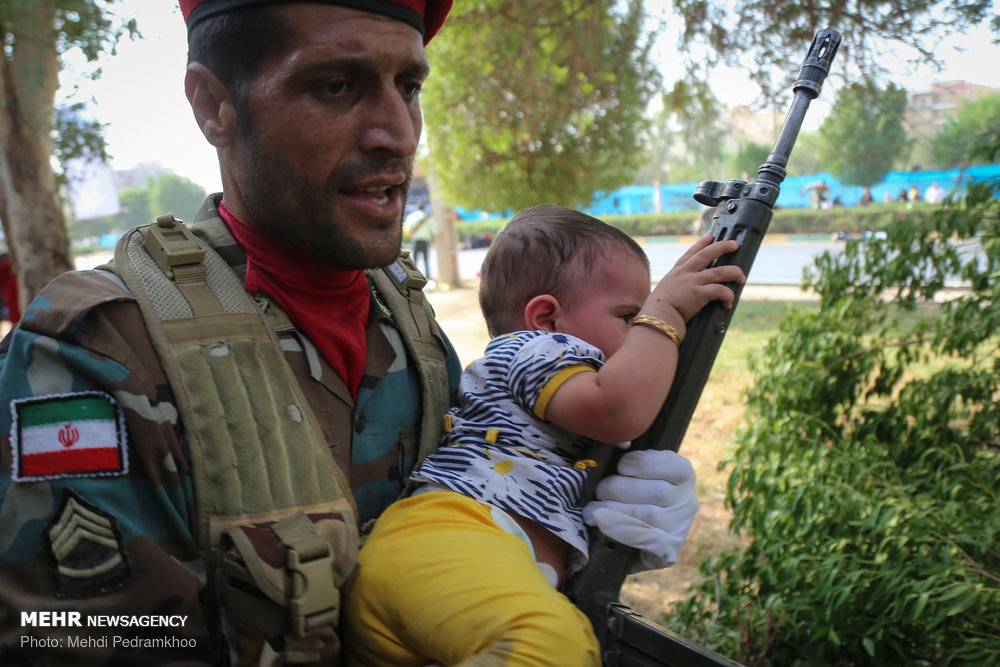 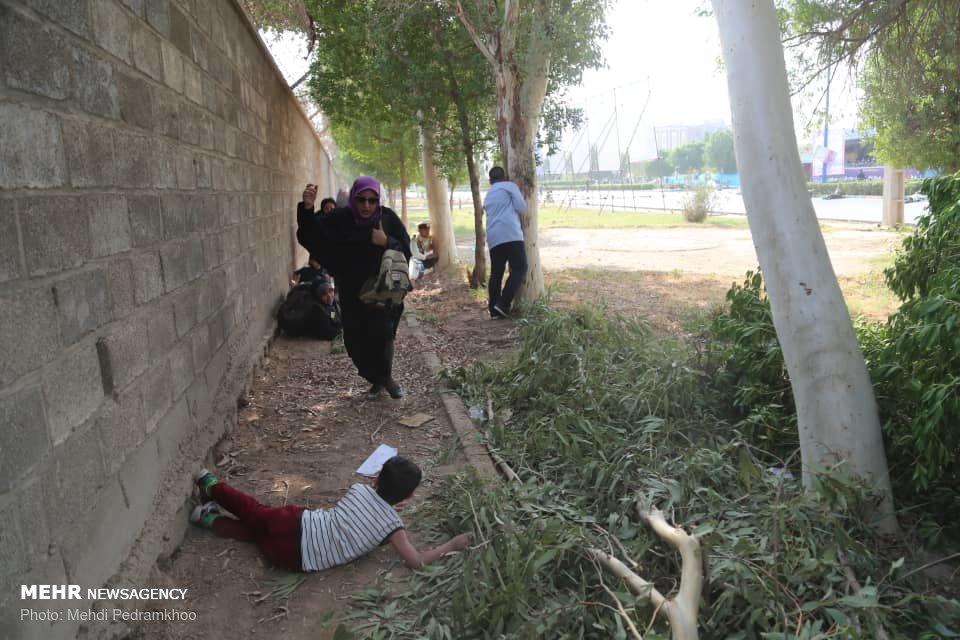 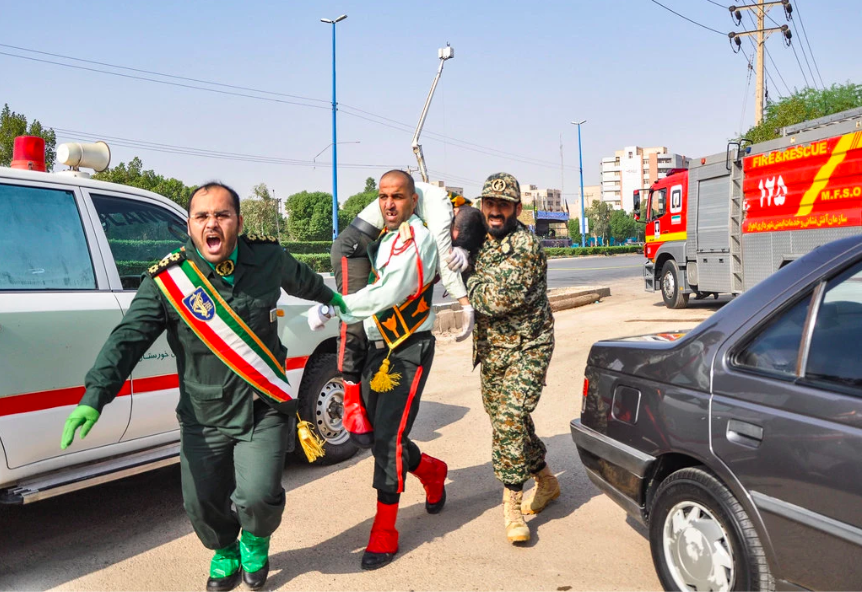 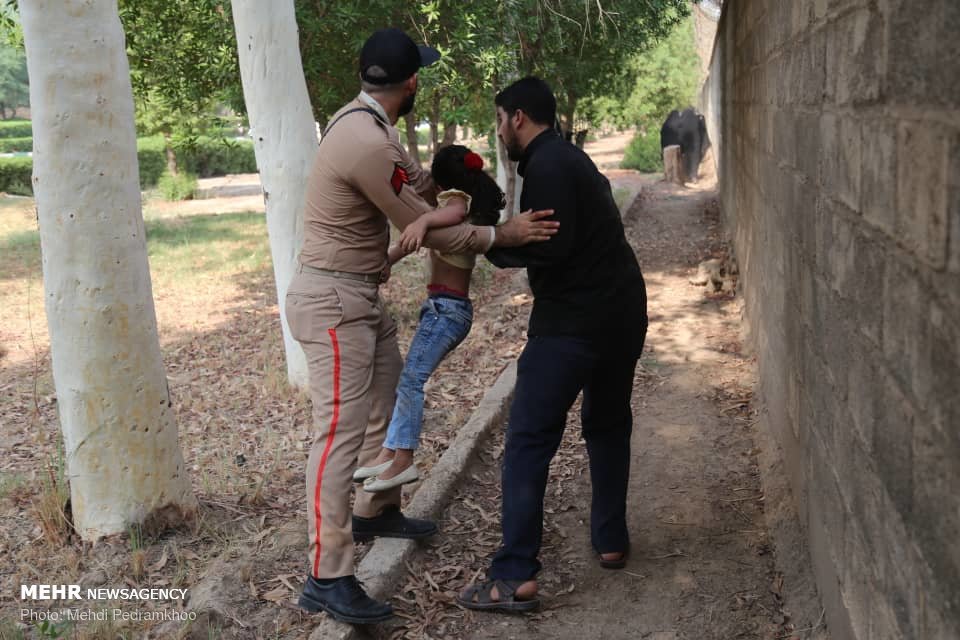 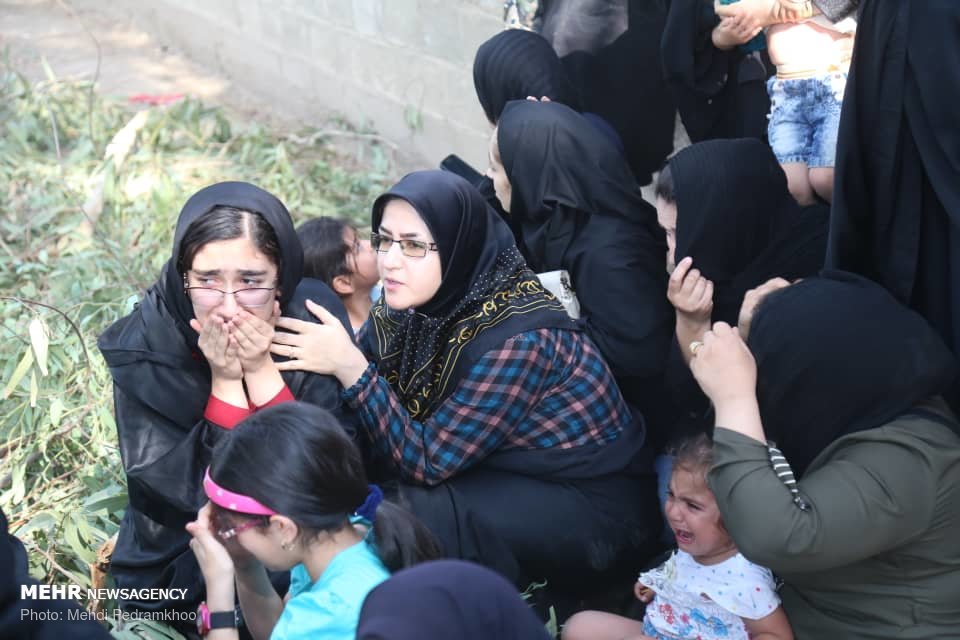 #Terrorist attack reported in #military parade in #Ahvaz, southwest of #Iran. Casualties are expected but no number of dead and wounded have been reported so far. pic.twitter.com/NJD8o3MkjO