And it will Change 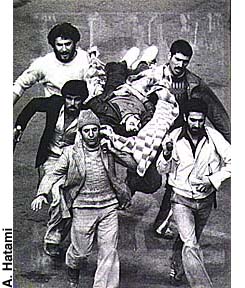 There are flowers in the pot
and the pictures on the table,
there is silence in the room
and the young ones to be fed.

There are heroes in the dust
and there are strangers in our lot,
who reveal every secret
that we try to bear in heart.

Today,
the oldest of our children,
stood up for the rights
of a people that he loved,
and a repression he tried to fight.

At the moment when he thought
that he had been the victor,
he was proven to be wrong,
but the moment he had captured.

There are hands that are reaching out
with nothing left to grab
after all is burned and gone,
and the calm has been restored
to the city near the end.

There is a hand for which I long,
a brother and a friend,
who stood up for the rest of us,
who had courage and
who had faith.

There are heroes in the dust,
in the pain and all the fury.
In the tears and
in the cries
there is our hero,
forever silent.

So they carried him away-
another light extinguished
one among the thousands.
And there they let him stay,
where they thought he had first come from.