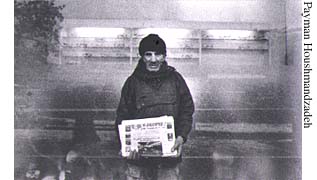 The price of
a pressless society

From "The press: To be or not to be?" by Faraj Sarkuhi, published in the June 1992 edition of Iran's independent magazine Adineh. Translated by Vahid Naraghi. Click here for the Persian text.

Any developing society needs water, housing, clothing, energy, technical and professional education, modern technology, the accumulation of a certain amount of capital, and professional management. No social or political group or organization or class has any doubt in these fundamental needs. From society's managers and planners, to the lower classes, all have accepted that in order to realize these fundamental needs, they should be tolerant in facing difficulties, be open to alternative ideas [concering economic growth] and consider them patiently and without prejudice, consult and discuss different ideas, ignore errors, respect different experiences, call on domestic and foreign experts, even welcome foreign investors and ... but what about the press?

Ah, the press. Eyebrows are raised by some in response to faint, ineffective words in an article that might indicate some alternative thinking, or when an opinion diffferent than theirs is expressed in print, or when they read a critical column, or when one or two people, whom they do not like, show their presence in cultural and intellectual circles. The offended individuals scream and shout that the country's much needed foreign currency is wasted when alternative views are printed on imported paper. They get angry at the mildly critical columnist or editor who is acting within the law, but who is not writing what they want. They scream and shout that freedom has limits that are not determined by law, nor by official institutions, but by their personal and organizational interpretations.

Industrial and business units, factories and so on perform with the permission of official departments and within certain laws and regulations. Once in a while, they might malperform. But have we seen a factory set on fire or a business office bombed because they have made mistakes? Then why is it that when it comes to the press, it seems like they deserve every kind of punishment -- even when they have done nothing wrong? The press have no protection whatsoever. This is how the press is treated by those who believe they are beyond the law.

No one doubts the necessity of providing bread, housing, clothing, water, electricity, industry, etc. But some prefer a society without colorful and independent magazines and newspapers. "Wouldn't it be possible to live in a society free from the printed press?" they ask their opponents. "Wouldn't it be possible to live in a society without any criticism or opposition, away from alternative, and sometimes opposing, thoughts and ideas?" They ask: "What is the press good for? All they do is criticize, present different opinions, transmit news and information." Such questions, of course, are not all due to ignorance, but are rooted in the intrinsic effects of the press on society. A dynamic, lively and creative press, in which people see their needs and pains reflected, a press that stimulates social consciousness and popular culture, guides society's managers, informs readers about the latest information and analyses from around the world, raises the level of thinking and promotes culture in an effective manner, is not possible without freedom, the rule of law and professional, social, cultural, economic and political security.

Achieving relative freedom, the rule of law and security, is only possible in the society as whole, and not just for the press. It starts from the family and school, and extends to popular, political and economic organizations and foundations. Thus, it is much easier to have a society that provides housing, energy and clothing than a society that has an [effective] press. For this reason, some respond to difficulties regarding the press by trying to destroy its whole existence. They are inclined to ask, "Why can't we have a pressless society?"

It is no sin to dream and the wings of imagination are not bound.

[Let's assume] that toward the end of the twentieth century, we are living in a peripheral country that is in desperate need of economic, social and cultural development, and has no press. The radio and television stations still exist, but we save on the cost of paper, printing equipment, and so on. Seemingly, we are free from any headaches. No one criticizes anything. No solution is proposed for society's problems. Basically, no problem is discussed. News or information does not reach the people. Creation of cultural works, poems, novels, critiques, etc., has ceased. The first effect is that government officials, managers and planners have lost one of their important tools in getting informed of the opinions of people and experts. Why? Because people also have lost their most essential tool, i.e. the press, to present their problems and points of view. The dynamic relationships between people and the society, people and the government, and among people themselves, lose color and fade away. And who benefits? Who else other than domestic and foreign elements who only care about money?

But people desire knowledge. The non-industrial world, the world where every corner of it used to be independent and on its own, has ended, forever. For centuries we have been living in an interdependent world where every event in every corner has had an impact -- and sometimes a determining impact -- on the rest of the world. A storm in one hemisphere causes an increase in the price of bread and meat in the other hemisphere, etc. People who live in such a world and understand their interwoven relationships, take refuge to foreign news organizations and radio stations in order to get information. A country's gates cannot be closed to radio waves.

In [our imaginary] pressless society, news, articles and analyses are not being produced. In a world where news and information are becoming the greatest international commodity, the pressless society remains a third- and forth-hand consumer of [foreign news and views]. It only takes a few years -- and not an entire generation -- for the minds of all members of our imaginary society to be molded by international news monopolies. Dominant news monopolies of power-thirsty capitalists tell people what events they should see and which news they should particularly contemplate upon. People influenced by these monopolies share the value system and ideologies of the global village envisioned by Mr. George Bush and his partners in the "New world Order".

In a pressless society, experts, thinkers and scientists in every field, even empirical scientists, do not think; no new ideas are offered. In universities that are supposed to produce an educated work force to meet society's development needs, students are turned into humans without social and cultural wisdom because they are ignorant of what is going on in the world and have no knowledge of different views. They lack the skill to criticize, or to think scientifically. The management of social and economic organizations will be in the hands of one-dimentional individuals. The dominant ideas and culture will decay because they won't evolve in clashes with opposing thoughts. All ideas hit a dead-end, for in a pressless society, news, information and new thoughts are not presented. Thinkers migrate abroad and unqualified persons cause the failure of every development plan.

Forcing people to stay away from a proactive and creative presence in society starts by denying the rights of popular organizations and shutting down the press. The press are the result and, at the same time, the preamble to popular freedoms. This is especially true in peripheral countries, that are facing a shortage of capital and lack high technology. The press have been recognized as the most important element in a country's growth and development.

The ideal situation would be for people to be informed of all the complexities of the world, equipped with a critical eye, armed with a sophisticated mind, and knowledgeable of different ideas. These would be the most important and greatest assets. That is the only way out of the terrible cycle of dependence, deprivation and capitalism. That is the only way to achieve independence, self-reliance, freedom, social justice, and keep people continuously involved in society. The press is the most important and effective way to educate and train such a people. In a pressless society, however, economic growth, development, spread of knowledge, and an evolving social and scientific culture are unachievable dreams.

Let's rid ourselves of the irritating thought of a pressless society, because a free and independent press is not just the desire of a group of writers, but a necessary and inevitable element for any kind of economic growth and development. If we think unselfishly and without prejudice, we may realize that in a society that is on the long and challenging road toward reconstruction, a free, independent and dynamic press is as necessary as bread, water, housing, electricity and clothing. Ignoring the necessities and needs of a developing society, is, at best, a sign of shortsightedness and ignorance. In this turbulent world where boundaries are expanding day by day, observe Hamlet's shadow from the depths of Shakespeare's soul, asking: "The press; to be or not to be?"