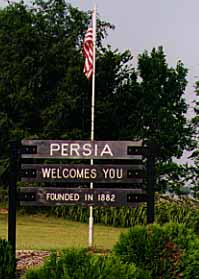 I just packed and left.

When I moved to New York four years ago I thought I had finally found a city I could call home. But in the end I suddenly found myself unemployed and unemployable ("Wow... you've worked with a lot of Eye-rainian news organizations, haven't ya?"). I no longer saw the skyscrapers as magnificent works of art. They were becoming oppressive. That cold, blunt New York attitude was getting to me.

I called my Abadani classmate Hamid and asked him if I could crash at his apartment in Palo Alto, near San Francisco, until I find a job. No problem. My sister Iran gave me her old car and I was on my way.

I love driving but only when I can listen to music. The car radio was broken and I could use my portable CD player only on maximum volume. I had been listening to Googoosh and passing through corn fields for thirty-something hours straight on Interstate Highway 80 West when something caught my eye. I thought I saw an exit sign for "Persia". I stopped on the side of the road and drove back. No I was not hallucinating.

I drove toward the town so fast as if I was afraid a city of magical proportions was going to disappear at any moment. I passed more corn fields. And then there I was, in Persia, Iowa.

The town -- village, hamlet? -- looked deserted. There wasn't a soul around at 4 in the afternoon on that early-October day. I parked on Main Street -- apparently the only street with shops. The grocery store was closed. The laundromat door had no glass. The barber shop and the cafe were closed. The gas station was closed. And they weren't just closed for the day. They looked as if they had been closed for a long time and would remain closed for a long time.

The first indication of life was a notice posted behind a window of the Persia Community Hall. It was the minutes to a local council meeting:

"August 12, 1996... Mayor's Report:
"Discussed dogs at large. Complaints must be written for city involvement. If [a] vicious/threatening dog [is] at large, citizens should contact sheriff..."

And finally, proof of human existence: The neon lights at Ray's Country Tavern across the street were on. I walked in and sat behind the bar. The bartender, a fiftyish woman with short salt-and-pepper hair was playing cards with three men, two of them the same age as her or older. Farmers.

One of the men joined in the conversation.

The frozen margarita was too strong. I took a couple of sips and thought I'd better stop. I had to go back on the road. Before I left I bought ten postcards, to send to my friends. I walked out and saw a few teenagers sitting around each other on the sidewalk. I asked them to pose for the camera and promised to put it on the Internet.

Another day went by. I still hadn't reached California. Somewhere in Nevada, I think, I passed a sign for "Elburz". Again, fascinated, I took the exit and got on a gravel road. I turned the corner on a hill, stopped, and looked as far as I could. I couldn't see anything. I thought if I get a flat tire in the middle of nowhere I would be in big trouble.

I just turned around and left.