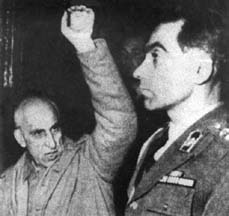 Mossadegh & The CIA Coup
On the 50th Anniversary of the 1953 CIA coup in Iran
Iranians for Freedom and Democracy & Iranian.com Present

Two documentaries
- Anatomy of a Coup; The CIA in Iran
- End Of Empire (British Perspective of the 1953 coup)
Followed by Q&A

For nearly five decade, the American and British role in the coup that ousted Iran's elected prime minister, and returned the Shah to absolute power, has been lost to history. A copy of the Central Intelligence Agency's secret history of the coup was leaked to the New York Times in 2000, revealing the inner workings of the plot that transformed Iran into a dictatorship and set the stage for the Islamic Revolution in 1979.

"Anatomy of a Coup" and "End of Empire" includes interviews with former spies, officials as well as Middle East experts, and old news footage from the time of the 1953 coup.

* Send this annoucement to your friends *