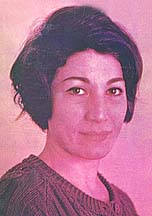 Farrokhzad: But what
about the new generation... in America?

Writers in Our Midst
First Conference of Iranian-American Writers

"Yeki bud, yeki nabud...." Once upon time was one of the lines of Arash Saednia's poems written in English, but it reflects the language, voices and experiences of someone who is "neither Iranian, nor American." Saednia's masterful poems capture the language and experiences of two cultures and reflect the emerging voices of a new generation of writers.

These poems were among the first utterances of Iranian-American writers read publicly at a conference sponsored by the Middle Eastern Studies Program and the Department of Middle East Languages and Cultures at the University of Texas (UT) at Austin on April 3-4, on the UT campus.

Is this the beginning of a new ethnic American literature?, you might be asking yourselves. I would venture to answer the question with a definitive "yes!" I was privileged to be among a panel of fine young writers who reprsent the divergent and evolving voice of Iranian-Americans of both the first and second generation.

The authors read their poetry and fiction, some of which will appear in the forthcoming anthology Echoes of the Iranian Diaspora in conjunction with UT (winter 1999).

On the final day, an interesting discussion followed the readings. Some of the many issues that were discussed on the included: the formation of a new literary voice; Iranian-American ethnicity; divisions within the Iranian community, what is it to be an Iranian in the U.S.?; racism toward Iranians in the aftermath of the hostage crisis; claiming Iranian authorship vs. just being a writer; uses of the term "Persian" vs. "Iranian"; connections between this literature and other U.S. "minority" literatures; and whether or not this minority status was connected to the desire among Iranians to seek political power and recognition as a community in the U.S.

The issues reflected what I think were an interesting representation of questions, concerns, and divisions, but ultimately remained exploratory and unanswered. This literature is in its infancy, but I hope with the publication Echoes of the Iranian Diaspora anthology, Iranian-Americans will begin to debate, discuss, and question some of the assumptions, problems, and concerns of a community that is no longer simply "exile" or "immigrant" but represents the shifting terrains of U.S. culture in the age of "transnational" migration.

Our discussion was both engaging and had moments of tension and controversy, something many of us feel is healthy and long overdue.