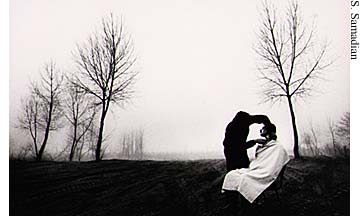 A spy in Tabriz

From "Know thine enemy; A spy's journey into revolutionary Iran" by Edward Shirley (published by Farrar, Straus and Giroux; New York, 1997. $24). As one of the CIA's "Iranian-target" officers in the 1980s, Shirley was a front-line spy in Europe and the Middle East. He has written for The Atlantic Monthly and Foreign Affairs. See book review . Excerpts from pages155-160.

"So when did you woke up and no longer believed in the revolution?" I asked, hoping Hazra would lift her eyes.

"I can't tell you when," she said impatiently. "I lost hope gradually. Khomeini always told us material things didn't matter. We believed him. We didn't have much in our lives. Others were rich. They still are.

"Sometimes, I still go to the mosque for prayers. Hosein won't come with me. Except for the mollahs giving speeches, no one says brother or sister anymore."

"But you still believe in Islam."

"I'm a Muslim. The mullahs betrayed God. I didn't."

"Do you believe the Holy Law is just?"

"But you no longer believe in Khomeini and the revolution. What's the difference?"

We looked at each other quietly, both of us listening to apartment and traffic noises. Women and children were stomping loudly down a stairwell. If the noise carried so clearly this way, it went the other way almost as well. Recoiling from the sound, I glanced toward the window and Hazra's Qu'ran.

My first Arabic professor had introduced me to the Muslim holy book. He'd learned to chant it in Cairo. Fascinated by every word, always faithful to its cadence, he could easily convey a student from an ivied campus to crowded streets bowing to a muezzin's call. The fourteen hundred years of constant recitation had clearly made it the most impassioned. Even perfectly secularized Muslims have a hard time gainsaying the Book... I searched my memory for a line to show Hazra my sympathies and concern.

Her voice brought me back from the window. "I didn't know much about our faith when I was young. Our family was conservative, but not religious. My mother and I went only a few times to a mosque before she died. She always thought mosques were for men. And my father would never take me. he and [my brother] Hosein rarely went.

"I discovered my faith through Khomeini. I'd known I was a Muslim, of course, but I hadn't felt my faith. The Imam changed that. Then I went to the university and met people who'd studied Islam for years. Most of them no longer revered Khomeini, but they weren't traitors or counterrevolutionaries. They cared deeply about Iran and Islam. They told me Khomeini was a revolutionary and a religious scholar. He shouldn't have allowed us to call him the Imam."

Hazra was living proof the clerics hadn't successfully Islamicized Iran's universities. They'd fired thousands of teachers and overhauled the curricula. Both professors and students had to have a razor-sharp idea of the sacred and profane. Yet Tehran University remained quintessentially Western: it could still unsettle the mind.

With thumb and forefinger, Hazra was rubbing a couple of strands of hair just below her ear. Nerves, or a pleasurable indoor habit? No doubt, she was a better Muslim than her brother. She still went occasionally to mosques, though good Shi'ites need not go to a mosque to pray. Yet her Islam hadn't obliged her to put on more clothing when I came to the door. She averted her eyes when we spoke, but she didn't try to hide the outline of her breasts through her nightshirt.

"Do you remember not wearing the chador?" I asked, finishing off another piece of baqlava.

"Do you ever think about wearing dresses again in public?"

"I'd feel awkward and ashamed. I couldn't protect my dignity."

"So you don't mind wearing the chador or a coat when you go out?"

"No. Men don't bother me when I'm covered. I can go wherever I want."

"So, in your dreams, you wear a chador?"

"What do you dream of?" I nearly shouted, trying to overcome a surge in the traffic noise.

"I dream about Hosein staying home more and about me having a better job," she answered once the trucks had passed.

She was aiming low; I wanted her high.

"Do you dream about marriage?"

You have to try several times with Iranians, each time at a slightly different angle. You have to chip patiently through the thick walls that separate women from men, then wait. I was more a sledgehammer than a chisel, but I was her brother's friend, a Persian-speaking American in Tabriz. I wasn't part of her world. Within the week, I'd be gone.

"Did you dream of marriage when you were eighteen and believed in the Imam?"

"Did you dream of marrying your cousin?" I asked timidly, fearful I'd shut her down.

"No. I didn't know him well then," she said cleanly.

"Did you want to find a man, get married, and fight together for the Imam and Islam?"

Blessedly, Hazra grinned and raised her eyes. "Yes, more or less. I would do my part. My husband would do his."

"And your part would be what? What did young women like you dream of when the revolution was young?"

"I dreamed of fighting. Fighting for the Imam, Islam , and against" -- she hesitated -- "imperialist America. I dreamed of having children who would fight. I wanted to volunteer to help behind the lines, but Hosein forbade it. He wouldn't permit me to have anything to do with the war."

"Was your cousin the only one in your family to die?"

"No, there were others. Distant relatives. I didn't know them well," Hazra answered, her voice tightening slightly.

"Was your family proud to have martyrs?"

"Did you ever want to be a martyr?" I asked, simultaneously asking for more pistachio-laden baqlava. Standing and serving, Hazra couldn't look away.

I didn't want her crying. I didn't have a case officer's privileges anymore. Also, Hosein might be home soon.

"After funerals. We were always in mourning for somebody. We'd done so little, compared to those who'd give their lives."

"Did you ever talk with Hosein about the revolution?"

"Not often. Hosein screamed whenever I started talking about Khomeini, and I didn't want him mad. He was home so seldom because of the war and his work."

"You were never ashamed of him?"

"Yes. But he's always thought of me before himself. When he was at the front, he'd somehow send gifts. He's always allowed my friends to visit even though he generally hasn't liked them. He's never hit me."

Before I could ask more, she was back in the kitchen. I smelled more sugar cooking. By the time Hosein returned, I wouldn't be able to move. He'd find me a asleep on a futon, stuffed with baqlava, and honey cakes. Hazra would tell him of all the questions, and he would tell her of many more. If I could stay awake with my eyes shut, and they would be kind enough to speak in Persian, I might then learn their secrets.

With my boots off and my feet warm, I wouldn't stay awake. A corked carafe of whiskey was on the table, an illicit leftover from one of Hosein's earlier trips to Turkey. It was early afternoon, but I'd made an exception. Once horizontal, I'd be gone. And once I was asleep, Hosein would leave me alone. By the time I woke, it would be dark and the Bazaar, inshallah, would be closed. There wouldn't be any long cold walks, no blue-uniformed young men with automatic weaponry, and no 360-degree sensations of Tabrizis seeing through my beard, dirt, and army overcoat. I wouldn't have to ask a single question about Hazra and the family network. My second night in Iran would pass far better than I'd feared, and far more comfortably than the first.

I vaguely remembered a Hazra somewhere in the classified cables on The Nest of Spies. A personal letter of the last U.S. charge [d'affaires Bruce Laingen] in Tehran mentions a teenage Iranian girl who'd been curious about a U.S. embassy limousine. The girl had insisted on knowing the car's owner. When told, she warned, "We're going to chase them out!" A few days later, the embassy was seized.

Change Tabriz for Tehran and Hazra had been that girl: poor, ardent, and probably even a little savage. Yet, fifteen years after the U.S. imperialists had been trashed, she was welcoming an American into her home with whiskey. Fifteen years isn't long for the world to go topsy-turvy. In November 1979, I would have thought visiting Iran in a box a nightmare, not a dream. And the CIA seemed then the pinnacle of public service.

History is, among other things, an unending chain of accidents. If I'd not had provocative professors of Islamic history, my early curiosity might have faded. I could have ended up a lawyer. If Hazra had lost Hosein in war, she would have lost her soul. With a martyred brother, she would have given herself wholly to the cause. No home, no future, a collapsed faith providing her only sustenance and solace. She could have ended up a streetwalker in Turkey.

If Ruhollah al-Musavi al-Khomeini hadn't lost his father when he was five months old and his mother at sixteen, perhaps he wouldn't have become the Imam. His uncompromising will and his cold eyes could have softened in a normal home. The Shah would have survived modern Iran's growing pains, and the CIA intelligence estimates of 1976-77 predicting Pahlavi rule and Persian Gulf stability into the twenty-first century would have been considered humdrum prescience.

* THE IRANIAN Bookstore
* Cover stories
* Who's who