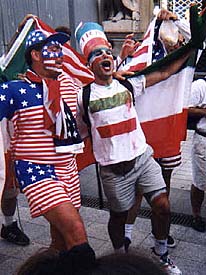 Sunday June 21, 1998 - Lyon, France around 1:00 PM local time, eight hours before the big game. We have been driving for five hours. Slightly tired, hungry and thirsty. We reach the center of the city - Place Bellecour and the close-by Place de la Republique. I can not believe my eyes. Sea of celebrating humans. Forget about food, water and resting! The Green, White and Red stripes of the Iranian flag everywhere.

I stick my flag out of the window of the car (the flag itself was bought in Tehran in 1986 from former khiyaabaan-e Sepah - the pole was bought in suburban Virginia two days before the game - coincidence?). Many people respond by waving their flags back and screaming and yelling. Everyone who is remotely Iranian seems to be out there and cheering.

This is a big contrast to the memories of fellow country-men (and women) I have gathered over the last 15 years who try to either hide or play down their Iranian origin - not to criticize them; they have their own reasons and they are a small minority regardless. But now everyone is out there as proud as can be.

The friendliness between the cheering American and Iranian fans was remarkable. I put on my best Texas accent and say "Howdy y'all boys and girls" to passing Americans; extremely surprised they return major smiles!

Several feet (or meters) away, a group of people are dancing "bandari" and shaking up a storm. American fans join in on the "qer" (dance) and the "seeneh-takooni" (chest shaking) frenzy. A friend yells "Maash-shaallaaaaaah!!!" The level of energy is unbelievable. Impossible to ignore; contagious; heart-warming; dizzying! The crowd sings "ey Iraan", and all sorts of chants, among them:

khodaadaadeh azizi / shafaayeh har marizi. (Khodadad Azizi, you are a cure for every sick person.)

Or another one (less relevant to the game):

This street party went on all day -- and I mean ALL day -- and continued after the game until dawn the next day, with the local Moroccans, Algerians and Tunisians joining in. Our group included Lebanese, Palestinian, Iraqi (yes, Iraqi) and French friends. This was for the entire Middle East, not just Iran.

It is now 8:00 PM. Time to get on the Metro trains and head toward the stadium. At the end of the train ride, we board busses that carry the fans closer to the stadium. For several blocks, the streets have been closed by the French police. There seem to be members of the police, gendarmes and the special anti-riot units. Security is very tight. The French police left nothing to chance for potential violence. They presumed Iranians and Americans might go at each other ala English and German fans. Not so.

Things were as friendly as can be. The most unfriendly athletic event I have ever been to has been the annual the American college football rivalry between Colorado and Nebraska! The U.S.-Iran game was not the same. There were lots of kids in the crowd. With painted faces -- both Stars and Stripes and Green-White-Red -- taking pictures together. At a pub close to the stadium, there is a large American crowd, celebrating with, guess what, lots of beer!

The Police had warnings that the Mojahedin Khalq might cause trouble. We are searched three times before being allowed into the stadium, full body search and bags and backpacks. The gendarme looks at my plastic water bottle, opens the cap and throws it away.

Inside the stadium Iranians seem to outnumber everyone else by a large margin. They have come from all over Europe, the U.S. and some from Iran. The speakers play the Macarena! To quote Danny Baker of "The Times" of London (Saturday June 27, 1998), "Until you've witnessed 30,000 Iranians doing a synchronized Macarena, this World Cup really hasn't yet let you in on the Big Picture."

The teams come out and the crowd roars. The names and player numbers are read in English/French (U.S. team) and French/Farsi (Iranian team). They exchange gifts and handshakes and a joint picture - for history. The Iranians hand flowers to the Americans. It was the most wonderful feeling observing that act of what folks back in "velaayat" call "javaan-mardi."

Behind me, there is a family from Illinois; grandparents, kids; the works! They didn't seem to know much about soccer but were there anyways cheering on the U.S. team. Very nice people. Howdy y'all! And welcome. The game begins. Non-stop excitement. Shouting non-stop, I soon lose my voice. But I had an ear piercing whistle so I used it effectively. DOO DOO ROO DOOD DOOD - IRAN! The entire stadium was delirious.

The first goal. Unbelievable. The stadium sign says: Etats-Unis 0 - Iran 1. Everyone is truly going mad. Second goal. Etats-Unis 0 - Iran 2. Madness at its peak. I was about to faint and felt a strong dizzy spell in my head - so I sat and tried to calm down. 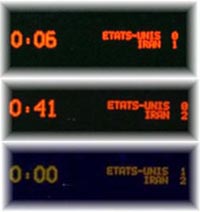 I have never experienced such excitement. This is not an exaggeration. I have never felt this way. My socabulary is severely lacking. The crowd, the lights, the noise, the joy, the vibes, everyone seems to be hugging everyone else, kisses fly, tears are shed and the stands are shaking as people jump up and down. Beyond comprehension, beyond words, saturation of the senses, emotional overload. The American goal. Many cheers. But too little too late.

Game is over. Right before the final minutes, French anti-riot police in full gear surround the field, facing the fans in the stands, standing approximately a meter apart from each other, as if daring the troublemakers to come down. No trouble, except for one or two "joojeh-mojaahed"s" running into the field.

As we are leaving, we hear political "marg-bar" this and "zendeh-baad" that slogans. Folks, guess who can ruin a wonderful memory, an occasion that has brought as all together after years of separation, a moment of happiness and joy after all these years of hardship for all Iranians, inside and outside of Iran? Guess WHO?

Yes, it is the same bunch who cozied up to Saddam Hossein and kissed his feet and sent bullets and rockets towards Iran and Iranians. But even this bunch could not ruin the night as the event was larger than them and their juvenile antics.

The memories and the impressions of this night are everlasting. The vivid recollection will never fade away. Let's hope that this event has been a prelude to better news and more joy for all of our fellow countrymen and women, regardless of where they live and what color passport they carry. And I have to give credit to all the Americans who were there in Lyon as they all congratulated the Iranians and were as graceful as can be. Many hugged each other.

* Also by Aref Erfani:
- Aqa Ne'mat
At an Aqassi concert in Washington, DC