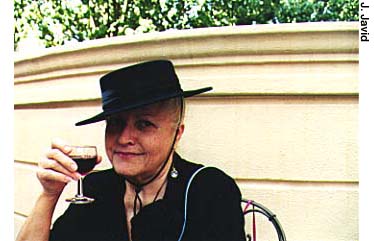 It was the 28th of July, 1945, the day of my 15th birthday in the summer of Masjed-i-Solaiman. I had a double date with my sister and two English soldiers in their military quarters.

The fan was on and the square card table was set for four, covered with a white linen cloth, silverware and napkins folded in triangles. A silver bell to summon the waiter was placed on the table.

The lamps were lit, and an open Dutch silver spirit-case stood with some bottles of soda-water and large cut-glass tumblers on a little marqueterie table, with the best gold-tipped cigarettes.

An Iranian waiter dressed in black with white gloves served us yellow soup in white bowls.

My date was from Ireland making light conversation as the waiter went in and out about Dublin and the writings of Oscar Wilde through the streets of Dublin dim, dust stained archades and trailing lace curtains.

My sister had met the English soldier at the Anglo-Iranian Oil Company pool and he had asked her for a date. I was asksed along as an after thought, giving much attention to the choice of my dress and changing my rings more than once.

Even in Masjed-i-Solaiman I wanted to go to Paris by the midnight train and be served a cup of hot chocolate on a bamboo tray.

That evening walking through the old earth tone town, the summer home of the Bakhtiari, the men were dressed in black and the women in long blouses and seven skirts of brilliant colors of turquoise-blue, yellow and vermilion with a long crocheted scarf tied under the chin. A beaded band across their forehead. In the hills the scent of baking naan in the hot earth ovens. British soldiers marched by dressed in khaki shorts and shirts with a riding crop, pit helmets and brown leather belts and boots, leading their Indian troops.

The little tea-house where nomads sat counting their amber beads and the black-hat merchants smoking their long tasselled pipes and speaking softly in Bakhtiari.

The Irish soldier from Dublin was part of Her Majesty's army, a Jewel in the Crown. In 1945, before the sun set on the empire, if I had wanted, if I had chosen, I could have picked a four-leaf clover.

Instead I read the Obelisk in the Place de la Concorde in its lonely sunless exile in Paris. Longing to be back by the Lotus-covered Nile, where the Sphinxes, rose-red ibises and white vultures with gilded claws and crocodiles with small beryl eyes crawl over green steaming mud.

Oscar Wilde is on my bookshelf now marking time in old green leather with gold monogram O.W. A gift from Ireland from my Irish soldier from Dublin.

Masjed-i-Solaiman surrounded by mountains and sweet wild poppies, I can hear the Bakhtiari singing. And for a moment, I felt keenly the terrible pleasure of a double life I tasted at a small party with the handsome Englishman and poetic Irishman when I was fifteen walking under the pomegranate trees.

* Featutres
* Cover stories
* Who's who
* Bookstore