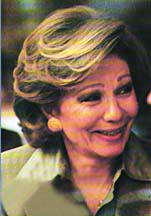 From an interview earlier this year with the late Shah's wife, Farah Diba Pahlavi, published in the French magazine "Point de Vue," a Persian translation of which appeared in the May 1997 issue of "Jahan" magazine in Los Angeles.

Reporter: Madame, you have changed your make-up. Have you done this to stay young or is this only your feminine allure?

Shahbanou (Empress) Farah: I don't like to speak about my figure or make-up. I prefer to pay attention to matters of the heart rather than beauty and fashion.

Like all women, I have undoubtedly made an unconscious decision to change my appearance. For many years I kept my hair bundled in the back with a clip or hair pin. But recently I noticed that I look a bit too serious.

Obviously shorter hair softens facial lines and creates a sort of facial harmony. But at the same time it does not get rid of the inevitable marks left by age. However, none of these are very important.

These things are a bit irrelevant when there is still talk of famine and massacres in Africa, and chaos in Albania. What is closest to my heart is torture in Iran and especially the horrible earthquake in Azarbaijan which has left more than a thousand people dead.

Reporter: At this point in time you seem to be looking to settle down. Your four children, your daughter-in-law and two grandchildren live in the United States but you prefer to live in Europe, especially France.

Shahbanou Farah: I don't like the term "wandering spirit." Yes, in the past when my husband was alive, for a time we did [go through a difficult time].

At the beginning of our life in exile, we went from one country to the other against our will. Some accepted us and some turned us away for political or economic reasons.

As an exile, I prefer to travel. Being an exile and living in one country would be more difficult to tolerate. The only place I would want to live permanently is Iran.

Nevertheless I must say that I like Europe, especially France because I feel that I have closer cultural ties to her. Also, the love extended to me here brings me joy. In Paris I feel the love and compassion of passersby in the streets and alleys. There is a certain kindness and friendliness in their smiles, as well as sympathy and encouragement.

Reporter: Let's assume that your return to Iran is only a fantasy. Tell me, Madame, what is your greatest wish?

Shahbanou Farah: Returning to Iran is not a fantasy. I am certain that the day will come. But my greatest wish is for Iran to become a free, liberal and progressive country. Iran deserves to regain its place among the free nations of the world.

Reporter: It seems you are taking part in cultural and international affairs more frequently. Does this mean you want to put aside conservatism to some degree?

Shahbanou Farah: The ceremonial aspects of these events do not interest me much. I have always shown interest in art. I love music, ballet, the theater and painting. My soul needs the artistic aspects of life. These things allow me to overlook daily problems, insults, quibbles and closed-minded attitudes.

Artistic events allow me to get closer to the artists whom I have always praised. They are very kind to me and I have a lot of respect for them.

Reporter: When you take part in these cultural events do you feel you are representing your people?

Shahbanou Farah: With my presence, in fact, I wish to remind others of the true Iran. I want to be a symbol of our proud history, traditions, culture and artistic values -- things which have been destroyed by the current ruling regime.

Reporter: Every once in a while there are rumors about the royal family's wealth. Some estimate it at 80 billion francs ($16 billion), a part of which was lost in an imprudent investment. What is your response to these rumors?

Shahbanou Farah: Unfortunately, no matter what I say, these rumors will continue. Nevertheless, I must deny all these rumors about our wealth as well as what you said about losing some of it [in a failed investment].

These rumors are political propaganda spread by the current Iranian regime. I am very disappointed that some become mouthpieces for such rumors.

Reporter: Recently there have been reports in the English-language press to the effect that your son, Reza II, has become totally bankrupt.

Shahbanou Farah: Of course it is true that my sons, my mother, and myself were tricked by someone who pretended to be our friend. He pretended that he could invest and manage our money. We trusted him and this was a big mistake. And it is true that I support my son [financially].

How do you see your children's future?

Shahbanou Farah: Optimistic and hopeful. I am proud of them because they have gone through a lot. They have shown exemplary character emotionally and politically.

My eldest son is courageously, intelligently and firmly determined to carry out his mission to free our country. My second son, Alireza, is continuing his studies in language and history at Harvard and he will soon be defending his dissertation.

My eldest daughter, Farahnaz, has studied child psychology and social work and Laila has studied literature.

I have faith in them and do everything I can to preserve my physical and psychological health so that I would be there to help them whenever they need me.

Reporter: You are also a happy grandmother.

Shahbanou Farah: A happy and satisfied grandmother. When I am with my grandchildren, Noor and Iman, I don't think of anything. They are a great joy given to me by God, my son and my daughter-in-law.

Reporter: Are you prepared to return to Iran simply as "Mrs. Pahlavi"?

Shahbanou Farah: Without a doubt.