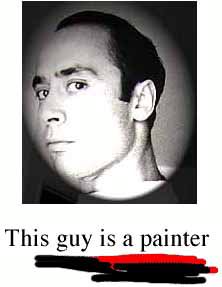 My first encounter with Ali Dadgar was last October at my cousin's Halloween party in Berkeley. He had painted his face white, a small cone sat on his shaved head with a string attached under his chin, and his entire belly was exposed through a round opening in the middle of his skin-tight overall. This is no clown, I thought.

Later I saw him playing the part of an intense, confused young Iranian who had grown up in the United States and was looking forward to killing himself. But like the lead character in Farhad's Ayeesh's play "Seven Nights with an Unwanted Guest," Dadgar's passion for life is too powerful. He has a mission in life. He's a painter.

I want to say his paintings are beautiful but that might not be the right word, unless beauty is described as something pleasing and disturbing at the same time. The raw energy running through many of his works pull you in willingly and unavoidably. You're trapped, and you love it.

Thirty-four-year-old Dadgar lives in Oakland, California. He was born in Tehran and lived there until the age of 15. After two years in Europe, he moved to the U.S. Halfway through a typical college degree aimed at a professional career, he dropped out and went to art school. In 1991 he graduated from the California College of Arts & Crafts with a degree in drawing and printmaking.

Since then he has been performing with the Darvag theater group in Berkeley, running his fabric printing business, and painting. And painting.