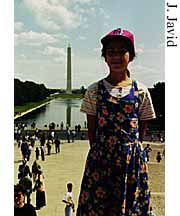 This is a summary of a paper titled "The Second Generation Iranians: Questions and Concerns ". You can see the full text of this paper here.

Many Iranians in the United States like to think of themselves as a collectivity, better yet as a national collectivity. This is not hard to understand because Iranians come from a rich and strong culture in which the love of the mother land is seen as a moral requirement. The Iranian culture, however we define it, is emotionally binding and the Iranian society, again in whatever form and shape we define it, is very .

Once out of their country, Iranians, like ethnic groups in similar situations, attempt to use their cultural heritage as an anchorage against increasing pressures of the host society for assimilation. However, the record of the Iranian immigrants in developing a sense of national identity and collectivity is mixed. The desired sense of community has not fully developed yet, though efforts in bringing about such a community are being made.

While the Iranian immigrants often express a strong desire for preservation of their cultural heritage, they show no significant resistance to the forces of assimilation to the host society. Their strong desire for a community does not fully match the realities of their presence in the United States.

First, while there is a sizable population of Iranians living in several metropolitan cities, the vast majority of this population is scattered around the United States. Though it is not necessary for a collectivity to share a territory within the host society in order to demonstrate its collective will, it is undeniable that residential diffusion of a population reduces the intensity of social interaction and weakens the sense of collectivity.

Second, for a group to be called a national collectivity, it has to have, among other things, a collective identity. Collective identity, and collective consciousness as its necessary component, will not emerge unless the members of the group develop a sense of community, interact with each other on a fairly systematic basis, relate to one another both cognitively and emotionally, seek and help each other in times of crisis, and congregate on special occasions for cultural and social practices. For these things to happen, more than individual and collective wishes are needed.

The group has to develop institutional mechanisms for relating to its members, demonstrating, reinforcing, and reproducing its cultural and national values and practices, and generating resources and support for its activities. While there are many Iranian micro-communities around the United States, especially the largest one in California, it is still too early to speak of the Iranian community in the U.S. as a national phenomenon.

The macro-community of Iranians is still in the early stages of development. Yes, there are non-territorial communities of Iranians which have established local dailys, national magazines, radio and TV stations, and electronic communications. But the community has not been able to develop sustainable national institutions with goals and objectives of reaching the majority of the Iranians.

Third, for a collectivity to have a particular identity, it needs to have some cultural assets in the form of symbols, values, practices, and objects. Though the Iranian culture is very rich in terms of these assets, it is not very clear yet how much of this cultural capital is transferred to the Iranian second generation in the context of the host society.

It also has become abundantly clear that Iranian immigrants in the United States have passed the transitional stage of their stay in this country and are experiencing the challenges and demands of integration to the host society. However, it is not very clear to what extent the Iranians have been able to transfer their cultural heritage to their children and if they do, what aspects of that culture are being transferred. A study of the second generation Iranians with a clear goal of identifying their loyalty to and retention of various attitudinal, behavioral, and symbolic elements of their parental culture should be able to detect such a transfer.

See the full text of this paper here.

* Mixing memory and desire: Iranians in the united States, by Laleh Khalili
* Iranian-Americans: A political survey, by Sussan Tahmasebi