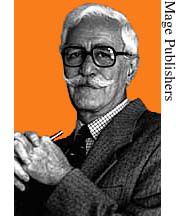 The myths of a classic

"One hot summer day, to be precise one Friday the thirteenth of August, at about a quarter to three in the afternoon, I fell in love." "My Uncle Napoleon" by Iraj Pezeshkzad; translated by Dick Davis -- Mage Publishers, 1996

With that unforgettable line, the narrator of one of Iran's classic novels began his story. I, too, a prepubescent stuck in another part of the world, resumed my own infatuation years ago after hearing his words. My tale, in contrast, had a far happier ending since the object of my interest was, in the end, the thoughtful young narrator of a book which arrived one day in the Swedish mail in an envelope addressed to my father.

The unassuming hard cover was adorned with a bespectacled figure, with a hint of madness around his eyes, who was riding a horse. This, I later realized, was Dear Uncle Napoleon, whose antics ingrained themselves so firmly in my mind that I was left with no choice but to make the decision to become a writer when I grew up.

Evenings, as I sat in our living room, oblivious to the cold, blistery Stockholm snow; transported--by the voices of my parents who took turns reading--to the world of Dear Uncle and his cohorts, I knew that Mr. Iraj Pezeshkzad (whose name was scribbled in small black letters across the top of the book) was one of the reasons I learned to appreciate my mother tongue. I vowed that one day I would meet him. Eighteen years later, I did.

Pezeshkzad
Having prepared myself for my meeting with Pezeshkzad for many years, I had envisioned countless scenarios; mainly they involved yours truly being rendered speechless after a face-to-face encounter with the author. The difficulty of meeting a well-known writer is that one always expects him to represent one of his characters. I had prepared myself for a Dear Uncle or an Asdollah Mirza; instead I was greeted by a highly intelligent, soft-spoken, and infinitely patient author who graciously answered the questions of an admiring reviewer.

The inspiration
The reason for writing the book? Mainly a desire to capture humorously the typical Iranian trait of consistently refusing to accept responsibility, and habitually blaming the rest of the world for Iran's woes. In this case, the English, who as Pezeshkzad pointed out, were the topic of discussion in most Iranian households during this period, and were held responsible for every upset -- from cabinet changes in the government to shopkeepers raising the price of tea. The paranoia about the English had filtered down from the intellectual and upper classes to the man on the street, to the point where conversations on street corners would be conducted in hushed tones, in case, you-know-who might be listening. In more recent times, the English were traded in for the Americans.

The truth behind the story
The character of Dear Uncle himself was, interestingly enough, based loosely on one of the author's uncles who became peculiarly obsessed with Napoleon, and began to gradually suffer from the delusion that he resembled the ruler. What appeared to be a sheer interest in the historical figure eventually led to a blown-out obsession, whereby Pezeshkzad's uncle would fret over the possible fear of dealings with Brittania. The uncle's increasing neuroses and tendencies to exaggerate -- as Pezeshkzad explained, a story about a small scuffle between two people would end as a war between villages! -- played a crucial role in a budding novelist's mind who would one day come to thank this unknowing eccentric family member.

Davis
The book that influenced modern Iranian literature (possibly more than any other) was written by Pezeshkzad during a foreign service assignment in Switzerland and translated, years later, by an English scholar who arrived in Iran in his twenties, fell in love with a culture and his future wife, and decided to take on the difficult task of introducing a typically Persian novel to the English-speaking world. The result of Dick Davis's venture has been phenomenal. Reviews about the book (published by Washington DC's Mage Publishers) have been nothing short of glowing.

In a recent phone conversation, Davis attributed the success to the book's basic elements: above all, the story is an immensely funny slapstick comedy -- inevitably with universal appeal. He further added that it is probably the only Iranian book available to a Western audience which depicts a more (for lack of a better word) human face of a culture that has been often misunderstood by the West. (A frequent observation amongst Western readers appears to be the rather surprised "Oh, Iranians have sex too!")

Tackling the translation
But how is it possible to translate the intricate details of a rich language (further complicated by its unique humor)? The answer best lies in Davis's devotion to and love of all things Persian. After reading and rereading the translation, I wondered whether the task could have been completed so well by anyone but an outsider who became an insider. It is, above all, a labor of love. Had the book been translated by a native Iranian, would proper justice have been served?

According to Davis, tackling the dialogue -- particularly, Mash Qasem's heavily accented quips, Aziz al-Saltaneh's insults, or Asdollah Mirza's sexual innuendoes -- was one of the more difficult feats of the project. How does one go about explaining to a Western audience why "going to San Francisco" is even remotely funny? Simply understanding Mash Qasem's long-winded monologues or the witty sarcasm of the rather bitter and uptight Aziz al-Saltaneh are testimony to the translator's understanding that an Iranian, above all, cherishes his words, and uses them -- more than any other tool -- to express his character.

Davis also pointed out, in response to my comments that Iranian literature is heavily influenced by tragedy as opposed to comedy, that the tradition in Persian culture and namely literature of, say, drinking wine and idling in romance date back to the writings of poets such as Hafez, and that satirical themes were quite common in medieval Persian literature -- a reminder that a book such as "My Uncle Napoleon" has simply captured the underlying (and often looked-over) theme in Iranian society: a healthy ability to poke fun at itself.

Who's the hero?
In contrast to Davis and others who felt that Asdollah Mirza plays a pivotal role in tying the story together, largely due to the fact that he is essentially the sole voice of reason amongst the lunatic fringe, Pezeshkzad placed Mash Qasem in the coveted role of hero. Pezeshkzad's particular fondness for the character is based on Mash Qasem's wisdom, which the author emphasized has nothing to do with knowledge or education which the character lacks. Mash Qasem symbolizes the man of the bazaar, the street; the underling who makes a living based solely on the generosity of his master. He is an institution in and of himself; an eternal presence in many Iranian households who is so much more a member of the family than a servant.

In addition, Pezeshkzad pointed out that the eternally devoted Mash Qasem is a smaller version (so to speak) of Dear Uncle, whose paranoias and fantasies mirror his master's; Dear Uncle could not possibly exist without the ever faithful sidekick.

Future Iranian literature
In response to the issue of Iranian writers in exile and the effects of their work, Pezeshkzad offered this theory: that in the end, the nationality of the writer is based on the language with which he chooses to express his thoughts. Hence, an Iranian writer in exile who writes in his native language is Iranian, but one who prefers to describe his sentiments in English or French is no longer an "Iranian writer"; the bridge has been crossed. After all, is Rushdie really an Indian writer?

The misplaced writer
Contrary to most writers who believe that exile is a main staple of their creativity, Pezeshkzad claimed: "I am removed from my natural environment [Iran] and the inspiration I need to fuel my creativity is no longer accessible." He blamed this lack of motivation on nonexistent (and necessary) feedback from other writers and the displacement of the writing community. "What is the point of writing if you rarely receive a response to what you write?" As an example, he pointed to the state of disarray of the Iranian exiled-writers community which, though active, has introduced nothing truly significant in the past 17 years.

On Laughter
Pezeshkzad's touching summary of his task as a writer: that even though he may touch on tragic tones and induce tears in his readers' eyes, he will never allow those tears to fall; he will always prevent the tear by injecting a dose of laughter when least expected. For our sakes, I pray that he continues to do just that...and why would I lie? As a wise man once advised, "To the grave...ah, ah, ah, ah..."

* A selection from Pezeshkzad's masterpiece.

Tara Taghizadeh is a Washington-based writer/editor.