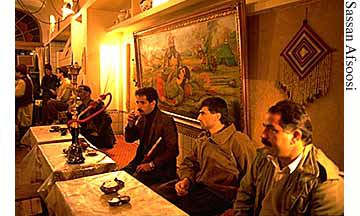 Coffeehouse (qahva-khana) a shop and meeting place where coffee is prepared and served. In Persia tea replaced coffee as the most popular beverage in the late 19th century, but the term qahva-khana continued to be used interchangeably with chay-khana for any establishment supplying tea, soft drinks, and sometimes even light meals. It used to be common for qahva-khanas to provide for smoking the water pipe (qalyan), but few still do so today.

It is possible that in Persia the first coffeehouses appeared during the long reign of Shah Tahmasb (930-84 A.D.), though there is no mention of them in the sources before the reign of Shah Abbas I (996-1038), when several were opened in Qazvin, Isfahan and other cities.

The rise of the qahva-khana in Persia, as elsewhere, was probably partly owing to increasing urbanization. Under the Safavids the relative political stability and absence of religious discord, the growth of the population, and the improvement of roads were important factors contributing to the spread of the new beverage throughout the country.

Initially, coffeehouses were places where well-to-do men and intellectuals could meet and talk. In Isfahan they were clustered mainly around the Maydan-e Shah and the Chehel Sotun, on the Chaharbaq, and near other centers of traffic and commerce, especially in the vicinity of madrasas (seminaries). Most were large vaulted buildings with central pools and, along the whitewashed walls, arched recesses (taqnamas) with raised floors.

The coffeehouses remained open from early morning until late at night, when they were illuminated by "abundance of Lamps lighted, and let down in Glasses from the Concave Part of the Roof, by Wires or Ropes, hanging in a Circle" [according to one scholar]. The busiest time was just around sunset.

Under the Safavids coffeehouses played an important part as meeting places for artists, poets, intellectuals, and even high officials. According to Jean-Baptiste Tavernier, every Persian with leisure time repaired daily to the coffeehouse. "The seats are plac'd as in so many Amphitheaters, and in the midst of every one stands a large vessel full of running Water, where with their Pipes be clean'd when they are over foul."

From time to time the shah himself came in and chatted with customers, sometimes bringing European residents or visitors with him; occasionally he even held official receptions for foreign ambassadors at these places. At such times the coffeehouses were adorned with mirrors and lamps.

for example, in 1029 Shah Abbas summoned the Spanish, Ottoman, Indian, Russian, and English envoys to a banquet at one coffeehouse; its large hall contained a central fountain with several jars, and it was brilliantly illuminated by lamps, candles, and mirrors. After the banquet the guests were treated to a performance by young Circassian and local dancers.

From the beginning coffeehouses had been favored meeting places for scholars, poets, musicians, and sufis. Poets, often seated on high chairs in the center of the room, recited their own works, as well as pieces by Ferdowsi and other great masters.

Sometimes two or three orators would perform simultaneously in a single large coffeehouse: A storyteller might be declaiming in one corner and a preacher in another. After finishing a recitation or sermon the orator expected a reward, and every customer would give as much as he could afford.

In Jean Chardin's opinion, the degree to which freedom of speech was permitted in the coffeehouses was unique in the world. In fact Shah Abbas, fearing that politics were too much discussed, ordered that mullahs should watch over the coffeehouses.

The poet Mirza-Mohammad Taher Nashrabadi, active during the regin of Abbas II, spent much of his life in coffeehouses on Meydan-e Shah, conversing and competing with other poets in contests; he collected many of these works in his well-known Tazkera.

To judge by his selection, many poets also devoted themselves to flirting with boys employed as waiters; these boys were required to plait their hair and wear revealing clothing, dance lasciviously, and tell bawdy anecdotes. According to Western visitors, the more pretty boys a coffeehouse proprietor employed, the more customers he gained.

Habitues of coffeehouses also indulged in narcotics, particularly opium. These vices became so common that by the last decades of Safavid rule coffeehouses were regarded as dens of iniquity, in which no respectable man would set foot. A contemporary author, Mohammad-Ali Qazvini, wrote a pamphlet warning young men that visiting coffeehouses and smoking tobacco or opium would weaken their characters, plunge them into misfortune, and waste large parts of their lives.

Coffeehouse paintings were a special genre of Persian folk art, showing some affinities with Persian miniature painting. Where there was enough room in the coffeehouse a storyteller, usually illterate, would erect a screen (parda) pinted with a narrative scene and explain the story to interested customers, who would reward him with money. The pictures were usually episodes from the shah-nama.