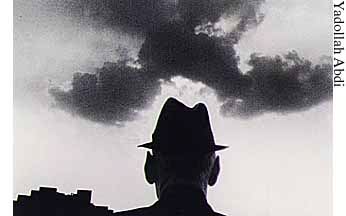 Eblis in Persian Sufi Tradition. The word Eblis, a Koranic designation for the devil, appears to derive ultimately from the Greek diabolos. Some authorities have nonetheless imaginatively connected it with Arabic ublisa ("he was rendered hopeless"), with reference to the accursedness that befell Eblis as a result of his rebellion .

Of the eleven Koranic verses in which the name Eblis occurs (2:34, 7:11, 15:31-32, 17:61, 18:50, 20:116, 26:95, 34:20, 38:74-75), ten refer to this rebellion and the events immediately preceding and following it; the exception, 26:95, speaks of "the hosts of Eblis" being cast into Hellfire on the Day of Judgement. Eblis is, therefore, a name peculiarly connected with the refusal to bow down before Adam and the reasons and motives that led to it; it occurs far less frequently in the Koran than al-shaytaan (Satan), which is used to designate the devil in the context of his maleficent plots against man.

The complexities surrounding Eblis begin with the exegetical questions pertaining to his original nature. The wording of 2:34, 7:11, 17:61, and 18:50 might be taken to suggest that Eblis was an angel until the refusal of divine command. However, such an interpretation would contradict the general principle that angels are constitutionally incapable of disobedience ("they rebel not against God in aught that He commands them, and they do whatever they are commanded"; 66:6).

Furthermore, 18:50 says clearly of Eblis, "he was from the jinn" (although it has been argued that the word al-jenn in this verse means the angelic custodians of Paradise). The nature of Eblis as jinn also seems to be confirmed by his boast, "You created me from fire" (55:15), this being the element from which the jinn were fashioned. Maybodi therefore concludes that the particle ella in the verses that speak of Eblis' refusal to prostrate himself does not imply an exception of Eblis from the otherwise obedient category of angels and has instead the sense of "by contrast with" or "unlike".

Some exegetes, most notably Tabari attempt to solve the problem by suggesting that the jinn were in some fashion derived from the angels or formed a subdivision of them so that the term al-malaeka (angels) in the problematic verses could be taken as implicitly including the jinn who are fully capable of refusing God's command.

This theory was buttressed by various narratives, for the most part unsupported by Koran or Hadith, that detailed Eblis' transition from the status of jinn to that of angel, or vice versa, within a single category of supernatural being. He is thus said to have originated as the commander of a troop of 7,000 angels worshipping God in the seventh heaven for 8,000 years; then, because of an innate wretchedness manifest long before his rebellion, he aspired, not to ascend beyond the seventh heaven to the divine throne, but to descend from it through each of the remaining heavens.

After spending 8,000 years worshipping God in each heaven, Eblis finally reached the earth where he quelled a rebellion of the jinn and ruled on behalf of God for eight more millennia until Adam was created and appointed viceregent in his place, inspiring him to rebel. Alternatively, Eblis is presented as being originally a jinn inhabiting the earth, who by virtue of the asceticism that set him apart from his fellows was elevated by God into the company of the angels, ultimately becoming their supreme instructor at the foot of the divine throne.

Of Hebrew origin, the name has the meaning "the one empowered by God" (among the Biblical verses where it occurs, possibly also as a designation for the devil, may be cited Leviticus 16:8-10, 13:21, and 17:7).

Eblis is generally understood, even by authors who regard him as fallen angel, as the father of the jinn, just as his adversary Adam was the father of mankind; extra-Koranic narratives attribute to him in addition the procreation of a named offspring, specifically and recognizably his own, each child being entrusted with the fostering of a different vice among men.

Many of them regarded as the main source of his undoing the egoism that expressed itself in the boast, "I am better than him (= Adam)" in the Koran, 7:12. Thus Ghazali observes, "The story of Eblis has been related to you not as a mere fable, but so that you might understand the outcome of pride, for it was pride that impelled him to say, 'I am better than him'"; and Rumi warns, "The disease of Eblis was 'I am better,' and this sickness is in every creature's soul".

One consequence of Eblis' egoistic pride was that he counted on the eons of worship he had performed both to rebel against God and to avoid the resulting divine wrath. According to Baha-al-Din Walad, his devotions weighed heavily only in his own scales, not in God's reckoning, and when he defied the command to incline before Adam, all his millennia of worship were revealed as counterfeit.

In the opinion of Abd-Allah Ansari, the devotions of Eblis were invalidated by his disdain for Adam, God's chosen friend, since all worship is futile unless accompanied by love for God's friends. For other Sufis, the case of Eblis was proof that worship alone, irrespective of quality or quantity, can never suffice.

Finally, Sufis attribute the downfall of Eblis to an unbridled inquisitiveness. He is said to have conducted a furtive examination of the physical form of Adam in its pre-animate state. According to Rumi, he compounded this offense by expressing disgust at the blood and putrid matter the body of Adam contained and denying his dignity.

It is in large part by promoting his own vices among men that Eblis deludes and misguides them; in addition, sins such as lust, gluttony, acquisitiveness, and, above all, anger provide dangerous inroads for Eblis into the human soul. Often, however, in keeping with his consummate cunning, Eblis persuades people to perform good acts for ultimately malicious purposes, an example being the ascetic whom he persuaded to nurse a sick girl in the knowledge that the ascetic would sooner or later fall prey to her charms.

It is plain that for the Sufis Eblis, as the agent of temptation, has a real existence external to man. Many of his characteristics are, however, identical with those of the nafs, the unredeemed self, and certain utterances of the Sufis suggest that Eblis is indistinguishable from the sinful inclinations of man and is therefore internal to him. Thus Najm-al-Din Kobra says, "Know that the nafs, Satan and angels are not things external to you; rather you are they. ...", and human shortcomings such as
egoism were seen by Baha-al-Din Walad as equivalent to Eblis.

The most distinctive feature of the portrayal of Eblis in Persian Sufism is, perhaps, the attempt to depict him as both more and less than purely satanic, an enterprise that ranged from simple exculpation to outright glorification.

At its simplest, this involved the predestinarian argument that Eblis was compelled to rebel against God. Thus Abu Said b. Abi'l-Khayr placed these words in the mouth of Eblis: "If it had been up to me, I would have prostrated the very first day. He (=God) tells me, 'prostrate yourself,' but He does not want me to. If He had wanted me to, I would have prostrated myself on that very day".

Similarly, in a poem of Sana'i, Eblis laments: "He (=God) wished to make me the target of his curse; He did what He wanted, that Adam of clay was but an excuse!" and, "I read on the Preserved Tablet that someone was to be cursed; I thought it might be anyone, but never myself".

In a similar vein, Eblis is sometimes presented as a victim of divine guile (makr). According to one tradition, [archangels] Jebrail and Mkail wept uncontrollably after the disgracing of Eblis out of fear that they, too, would fall prey to God's guile, and He told them approvingly, "Be thus; do not feel safe from My guile". Eblis himself complains, in the poem of Sana'i, "Secretly He placed the trap of His guile in my path, and then He put Adam in the ring of that trap".

Once it is assumed that God both willed Eblis to disobey Him and intended all the consequences of his disobedience, a contradiction necessarily arises between the divine will (erada) and the divine command (amr) to make prostration before Adam.

A more significant consequence of God having willed the rebellion of Eblis is that his malevolent activity must be seen as having a divinely mandated purpose and cannot, therefore, be integrally evil. Eblis is, for example, the polar opposite of Adam: whereas Adam sought forgiveness for his act of primordial disobedience and accepted responsibility for it (Koran, 7:23), Eblis complained at having been led astray (Koran, 15:39); Adam is thus the manifestation of neediness before God and Eblis of obstinate pride.