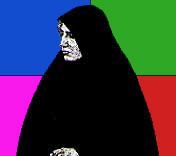 Dress: Visitors to Iran are officially "requested" to wear "decent" clothing, and "ladies should observe the Islamic outfit."

The Iranian dress code is not only inspired by Qoranic commands , but also rigidly reinforced by law, so flouting the rules is more than just bad manners. Revolutionary Guards have been known to go around on motorcycles during Ramazan toting cans of paint to spray on the bare arms of anyone rash enough to be caught wearing a T-shirt in public. In May 1990 it was announced that computer records would be kept of those caught breaking the dress code -- a fine example of 20th century technology serving 6th century purposes.

It is not necessary for a foreign woman, or even Iranian women, to wear the chador, the one-piece cloak traditionally associated with the country.It is however essential for them to cover all parts of the body except the hand, feet and face (from hairline to neckline), and to ensure that the outer layer of clothing gives no hint of the shape of the body.

Standard dress for Western women in Iran tends to be a full-length skirt, or a long-sleeved shirt and trousers (jeans are okay), worn underneath a loose-fitting, below-the-knees, black or dark-blue coat. A large, plain, dark headscraft should cover the hair and neck (a hat will not do) and thick socks should cover any visible parts of the legs. Apart from plain rings, jewelry and makeup should be discreet to the point of invisibility.

The chador or outer layer of the clothing does not have to be black or dark blue, but it usually is in most parts of Iran. Girls are expected to wear the hejab from the age of about seven. If you want to wear a chador, you can have one made up quite cheaply and quickly at any dressmaker's shop, but it is rather unusual for Western women to go this far.

Men must wear full trousers, not shorts, and must keep their arms covered. In most urban areas you can usually get away with shirt-sleeves rolled up below the elbow (except during Ramazan), but it is better to have them done up at the wrist. T-shirts are perfectly acceptable if worn underneath a jacket.

Iran must have one of the highest proportion of men with beards or moustaches of any country in the world, although it is often difficult to distinguish between an attempt at a full beard and what is merely a bad shave. Beards are the height of respectability in Iran, and President Rafsanjani is even often mocked for not having one.

For reasons beyond my logic, ties have been officially condemned as an unwelcome and un-Islamic symbol of Western cultural imperialism, whereas jeans are almost universally acceptable. Clothes loosely based on Western fashions are the rule for Iranian males, except among the mullocracy and some of the tribal or ethnic minorities. They are also surprisingly common on younger Iranian women, albeit hidden under the hejab. Many of the clothes sold in Iran's boutiques are cheap and nasty imitations of outdated Western models.

The laws on dress are particularly strictly enforced during Ramazan when Iranians, never the most colorful of dressers, avoids reds and any other bright colors. Colors are also subdued during Moharram, the month of mourning.

You can purchase "Lonely Planet Iran" from Amazon.com, the world's largest online bookstore. THE IRANIAN is an associate of Amazon.com. Click here.