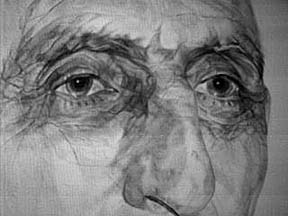 Shahin "Gagliostro's" unfinished painting of
Mohammad Mossaddeq whose government
was overthrown in the 1953 coup,

WASHINGTON -- The CIA, which has repeatedly pledged for more than five years to make public the files from its secret mission to overthrow the government of Iran in 1953, said on Wednesday that it had destroyed or lost almost all the documents decades ago.

Two successive directors of central intelligence, Robert Gates in 1992 and R. James Woolsey Jr. in 1993, publicly pledged that the Iran records would be released as part of the CIA's "openness" initiatives. But they did not know there was virtually nothing left to open: almost all of the documents were destroyed in the early 1960s.

"If anything of substantive importance that was an only copy was destroyed at any time," Woolsey said on Wednesday night, "this is a terrible breach of faith with the American people and their ability to understand their own history.

A historian who was a member of the CIA staff in 1992 and 1993 said in an interview on Wednesday that the records were obliterated by "a culture of destruction" at the agency. The historian, Nick Cullather, said he believed that records on other major cold war covert operations had been burned, including those on secret missions in Indonesia in the 1950s and a successful CIA-sponsored coup in Guyana in the early 1960s.

Brian Latell, the CIA official who runs the Center for the Study of Intelligence at the agency, acknowledged on Wednesday that most of the Iran records were destroyed or lost in the 1960s. He said he thought the agency still had "substantial" records on its covert actions in Indonesia, which it has promised to release. He said he could not discuss Guyana, which he called an operation whose existence the CIA had never acknowledged.

"Dr. Cullather is correct" about the Iran records, he said.

In the early 1960s, Latell said, CIA officials told the keepers of the Iran records "that their safes were too full and they needed to clean them out."

"This was the culture in the early 1960s," he said. "No such culture exists any longer and hasn't existed for some time."

The directors in that era were Allen Dulles, who served from February 1953 through November 1961, and John McCone, who succeeded Dulles and served through April 1965. It is unclear whether either man was aware of the destruction.

Cullather, now an assistant professor of history at Indiana University and associate editor of the Journal of American History, came to the CIA in 1992 as a member of its history staff. He was assigned to write a warts-and-all account of the CIA-sponsored coup in Guatemala in the 1954. Gates had just made his pledge of openness and promised to release the files on Guatemala, Iran and the 1961 Bay of Pigs invasion of Cuba.

But the CIA "quickly found there were no documents on Iran," Cullather said. "They had been routinely purged. When I left in 1993, they had rounded up about 25 or 50 pieces of paper. There was almost nothing. The bulk of the documents on that operation were destroyed."

Latell said only "a small body" of Iran records remained. Other officials said the surviving files totaled about one cubic foot. No one at the agency had told Woolsey about the records' destruction before he gave a speech in September 1993 rededicating the CIA to releasing the Iran files.

Ed Cohen, the director of information management at the CIA, said in an interview that strict procedures at the agency now insured that no valuable historical records were routinely burned.

"The destruction process is not mindless," Cohen said.

Historical records of secret operations are reviewed by the agency's covert operators, the CIA's general counsel, the agency's inspector general and the office of the historian, where Cullather worked.

Cullather agreed that "there's no grand conspiracy in the CIA to destroy documents."

"What there is," he said, "is neglect, or negligence" and a "culture of destruction," born of secrecy.

The broad outlines of the Iran operation are known -- the agency led a coup in 1953 that installed the pro-American Shah Mohammed Reza Pahlevi on the throne, where he remained until overthrown in 1979. But the CIA's records were widely thought by historians to have the potential to add depth and clarity to a famous but little-documented intelligence operation.

The CIA has proved that it can release history-altering documents. On Friday, it declassified 1,400 pages on the Guatemala coup in 1954 and two historical papers, including Cullather's 116-page account of the operation.

Cullather said the records on which he based his work were preserved only by a quirk of history: a lawsuit seeking the documents, filed under the Freedom of Information Act in 1982 by Steven Schlesinger, an author of "Bitter Fruit: The Untold Story of the American Coup in Guatemala," (Doubleday, 1982).

"The CIA is presenting the Guatemala release as evidence of good faith and openness," Cullather said, "but it's the exception."

He said the breadth and depth of the documents' preservation "generally doesn't happen with CIA operations."

Using the documents preserved by the lawsuit, Cullather produced an astonishingly frank account, written in 1993 and printed in 1994, which may be a high-water mark in CIA openness.

His account says the CIA directly lied to President Dwight Eisenhower when it told him that only one of the agency-backed rebels had died in the Guatemala coup. In fact, at least 43 rebels were killed. The account also says the Guatemala operation, which "went into agency lore as an unblemished triumph," was marked by poor security, bad planning and third-rate reporting.

It describes the leaders installed by the CIA as repressive and corrupt. The coup, it says, destroyed the political center in Guatemala, which "vanished from politics into a terrorized silence," and led to a series of brutal military governments and a "cycle of violence and reprisals" that "claimed the lives of a U.S. ambassador, two U.S. military attaches and as many as 10,000 peasants" in the 1960s.

"The CIA never learned from the experience," Cullather said, so the Guatemala coup became a model for the disastrous Bay of Pigs operation. "Legend replaced reality. It's a classic case of the CIA not learning from its own history," a history that was secret.