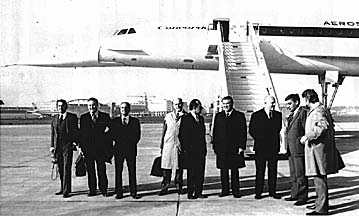 Photo and note from Farhad Sepahbody: This picture was taken circa 1973 at the Aerospatiale Center in Toulouse, France. On that day we flew the Concorde to Dakkar, Senegal where we had lunch, then back to Toulouse. In the early seventies we signed an option for two Concordes for Iran Air. The French were elated. Iran did it as a gesture toward France. We did the same for the SECAM Television system. The Iran Air Concordes were ill-fated. Instead of buying them, we chartered the Concordes for just occasional Paris-Tehran and Paris-Kish Island flights. Upon our return from Dakkar, the Iranian pilot performed several take offs and landings. Both pilots flew in their civilan suits. It was something out of a James Bond movie.

From left to right: Farhad Sepahbody, economic counselor of the Iranian embassy in Paris; the head of Aerospaciale Industries; and General Hassan Pakravan, Iranian ambassador to Paris. Right to left: The aircraft chief engineer, the excellent Iranian pilot who was at the controls all during the flight the time. (Unfortunately I fail to recall his name). The third person from the left was chief test pilot, Commander Turcat of Aerospatiale.