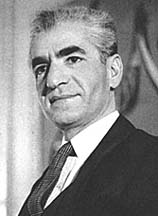 Mohammad Reza Shah Pahlavi, King of Kings, Light of the Aryans and Grand Ayatollah Imam Khomeini, Leader of the Islamic Revolution and Founder of the Islamic Republic... two men who have shaped our lives, more than any other politician in the past half century, in the most contradictory fashion... and yet despite their wide and obvious differences, they had a couple of things in common: neither was very good at displaying compassion or accepting compromise. It was either their way, or no way.

Would you agree? Maybe, maybe not. Many of us have very strong emotional attachments to one or the other. We can't help it. How could anyone stay neutral toward such overwhelming characters? We love them or hate them with a passion that blinds all reason. And with total allegiance to one or the other, one becomes like them, uncompromising, intolerant, stubborn... I better stop right here before I make more people upset...

A couple of months ago I visited my relatives in Los Angeles. They brought out several books of collected photographs. "I've seen that... that too... not interested... Wait! What's that?"

It was a book called "Coronation in Tehran" (Special edition of "Bunte Illustrierte", West Germany, 1968 ?; photographs by various photographers), with dozens of pictures of the Shah, his family and... many of them from his coronation in October 1967.

I thought why not select a few pictures from the book and put them side by side pictures of Ayatollah Khomeini published in "Allah-o-Akbar" (Culture and Art Foundation of Iran, 1980 ?; all photographs by "Hatami").

So here they are, the Shah and the Ayatollah, both pictured at the height of their popularity... I can hear your objections loud and clear... okay, you be the judge. And after the dust settles, if ever, grab a cup of tea and (no, don't throw it at the computer) just remember that you're alive and they're not. jj