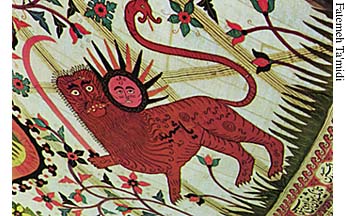 Derafsh-e Kavian , the legendary royal standard of the Sasanian kings. In the Shah-nama it is recorded that, when the blacksmith Kava revolted against the tyrant Zahhak, he draped his leather apron from a wooden spear as a standard. As a result of the revolt, the throne passed to a prince of the ancient royal house, Fereidun , who adorned the apron with gold and brocade, gems, and tassels of red, yellow (or blue), and violet and called it derafsh-e kavian, "the standard of the kay(s)" (i.e., kavis "kings") or "of Kava."

Each succeeding king added jewels until even at night it shone like the sun. In early Islamic sources this story was elaborated in various ways. According to the 10th-century historians T®abari and Masudi, the banner was made of panther skin and was 8 x 12 cubits, about 5 x 7.5 m; Kharazmi cited sources to the effect that it was of bear or lion skin. In the 14th century Ebn Khaldun reported that it "had a magic square of a hundred fields woven into it in gold," reflecting the belief that an army carrying a banner with such a square would never be defeated in war. It was also sometimes called the "standard of Jamshid," the "standard of Fereidun", and the "royal standard".

According to the Shah-nama, when the army was mustered five mowbeds (priests) would bring the standard forth from its storehouse, and it would be carried with the king or army commander on campaign; it was often mentioned with the adjectives "auspicious" or "blessed" (homayun, khojasta). In battle the standard served as a rallying point for the troops.

There is no direct mention of the Derafsh-e Kavian in the Avesta or in Achaemenid or Parthian sources, but several scholars have argued that it is depicted in a damaged portion of the Alexander mosaic from Pompeii, the subject of which is the victory of Alexander the Great over Darius III at the battle of Issus. Xenophon mentioned, however, that the standard of the Achaemenid king was a golden eagle on a shield carried on a spear. Arthur Christensen accepted the Derafsh-e Kavian as the royal standard of the Sasanians and argued that the myth of Kava had its genesis in the Sasanian period, reflecting the fame of the house of Karen, which traced its lineage to Qaren, son of Kava.

Stig Wikander agreed but argued that the standard was adopted not by the Kavis of the Gathas but by the eight Kavis of the Yashts, the mairyo (Mid.Ir. merag, Ved. marya). He argued further that Derafsh-e Kavian became the national banner of Iran in the Parthian period. In the battle of Qadesiya, in which the invading Arabs defeated the Sasanian army, the standard fell into the hands of Zerar b, Khattab. He received 30,000 dinars for it, though its real value was said to be 1.2 or even 2 million dinars. After the jewels were removed the caliph Omar is said to have burned the Kavian standard.