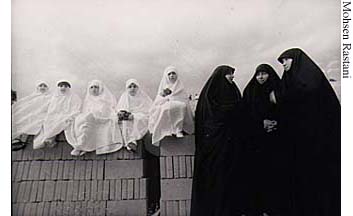 DUALISM, feature peculiar to Iranian religion in ancient and medieval times. There is general agreement on this point, though some scholars have minimized the importance of dualistic elements in Zoroastrian doctrine and even denied their existence, in order to emphasize monotheistic or crypto-monotheistic aspects, perceived as incompatible with any form of dualism.

From a strictly religious-historical perspective, however, dualism should not be conceived as opposed to monotheism (as polytheism must be); on the contrary, it can be viewed as "monotheism itself in two opposite and contrary aspects". Although this definition cannot be applied to every
dualistic religious conception, it fits Zoroastrianism, in which a monotheistic tendency and a strong dualism coexisted. The problem is complicated by the fact that Iranian dualism was not unitary and static but a developing concept.

Heterogeneity within the Iranian religious world must also be taken into account; in fact, the fundamentally ethical and philosophical dualism of Zoroaster (as found in the Gathas and in part of Zoroastrian tradition) must be distinguished from a metaphysical and ontological dualism in which two coexisting entities are opposed by their intrinsic natures, rather than by choice. This distinction is rejected by those who maintain the ontological nature of dualism in the Gathas and argue that reference to the two mainiius "spirits" is at most a "statement regarding their
essence".

Nevertheless, the pivotal role of choice in Zoroastrianism has been established by Herman Lommel and others, and Ilya Gershevitch has argued\ effectively for the ethical character of the gathic opposition between the two spirits. The most lucid evaluation of dualism as a fundamental element of the Gathas is that of W. B. Henning: "Any claim that the world was created by a good and benevolent god must provoke the question why the world, in the outcome, is so very far from good. Zoroaster's answer, that the world had been created by a good and an evil spirit of equal power, who set up to spoil the good work, is a complete answer: it is a logical answer, more satisfying to the thinking mind than the one given by the author of the Book of Job, who withdrew to the claim that it did not behove man to inquire into the ways of Omnipotence".

According to Henning, Zoroaster came to formulate his dualistic conception "only by thinking" and "by very clear thinking." Whether he was correct that it was a protest against monotheism or whether it was an integral part of gathic monotheism is unclear. It can reasonably be concluded, however, that dualism lay at the heart of Zoroaster's message and that gathic dualism cannot be dismissed on grounds that Ahura Mazda stood above the two opposed spirits or that an eschatological expectation of the triumph of good pervades the Gathas. These elements are, in fact, common to other dualistic conceptions in which the final triumph of good is implicit.

The following passage from the Gathas (Y. 30.3-4) is fundamental to understanding Iranian dualism: "The two primeval Spirits who are twins were revealed [to me] in sleep. Their ways of thinking, speaking, and behaving are two: the good and the evil. And between these two [ways] the wise men have rightly chosen, and not the foolish ones. And when these two Spirits met, they established at the origin life and non-life and that at the end the worst existence will be for the followers of Falsehood and for the follower of Truth the Best Thinking."

Although the interpretation of this passage is uncertain, its dualistic content is beyond doubt. Equally clear is the paradigmatic character of the choice between two spirits, the prototype of the choice that man must make between the paths of truth and falsehood. Among the many other gathic texts in which dualism is emphasized are Yasna 45.2, in which the two spirits are juxtaposed in several modes of expression, and Yasna 47.3, in which the twinship of the two spirits is implicitly clarified by affirmation that Ahura Mazda is the "father" of the beneficent spirit: Both are, in a certain sense, sons of the same father.

Interpretation of "twins" as a metaphor for "the equality in state of the two unrelated beings, and their coevity" is unconvincing. Instead, the fundamental role of choice in Zoroastrian dualism should be kept in mind; the relationship between God and the devil did not involve direct dependence, because the notion of "childbirth" implicit in the concept of twin spirits refers to derivation from God of an undifferentiated spirit, which splits into twin spirits of opposite allegiance once human free will has emerged.

Islamic hostility to dualism also influenced the Zoroastrian communities in Persia. In fact, condemnation of dualists was almost a topos in Muslim refutations of Manichean, Mazdakite, and even Mazdean doctrines; the last was, however, given special attention. After the Muslim conquest of Persia and the exodus of many Zoroastrians to India and after having been exposed to both Muslim and Christian propaganda, the Zoroastrians, especially the Parsis in India, went so far as to deny dualism and to view themselves as outright monotheists. After several transformations and developments one of the defining features of the Zoroastrian religion thus gradually faded and has almost disappeared from modern Zoroastrianism.

Nevertheless, Iranian dualism spread widely east and west of the Iranian world, especially through Manicheism. Traces can still be found in Central Asian and particularly Tibetan cosmogonies. In the West, although the connections are uncertain and the historical development difficult to reconstruct, religious dualism can be identified in the beliefs of Priscillianus and his followers in the late Roman empire, the Paulicians in the Byzantine empire, and later the Bogomils.