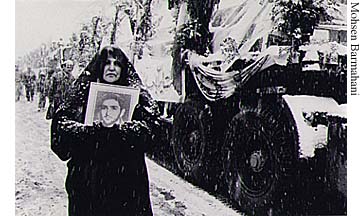 DEATH among Zoroastrians. At death among Zoroastrians the body is swiftly disposed of, but rites for the soul are prolonged. They are also complex, partly because, although Zoroastrianism is a salvation faith, offering hope of heaven and threat of hell, it maintains rites that, as Brahmanic parallels show, are an inheritance from very ancient, pre-Zoroastrian, times and belong with quite different beliefs.

These beliefs were that the soul, after lingering on earth for three days (a belief retained in Zoroastrianism), needed before its departure consecrated offerings to provide for it in the underworld kingdom of the dead; and that it required such offerings again on the thirtieth day after death, the first anniversary day, and then annually for thirty years, or roughly a generation. Thereafter it was held to have been fully accepted into the ranks of departed souls, who received such offerings collectively only once a year, at the festival of Hamaspathmaedaya.

Presumably in the early days of the faith converts clung so strongly to these age-old observances that the religious authorities were forced to allow them to be continued, "Zoroastrianizing" them as far as possible and blending them with new ones that had the wholly different intention of helping the soul to attain heaven above, after which it should have no further need of anything. Indeed, according to Zoroaster's teaching, the soul's fate depends solely on the sum of the individual's thoughts, words, and acts, the good being weighed against the bad, so that no observances should avail it in any way. But human weakness (including the force of natural affections) and human illogicality enabled his followers to maintain this doctrine while at the same time performing many rites for the departed soul's benefit.

The oldest attestation of the rites of Hamaspathmaedaya is in Yasht 13.49-52. Those for the individual soul during the three days after death, termed comprehensively in Pahlavi sedosh (stwsh), were apparently referred to in the lost Husparam Nask, or more probably in its Pahlavi commentary, according to a citation in the Nerangestan. They are known in more detail from texts set down in post-Sasanian times (notably the supplement to the Shayest ne Shayest, the Pahlavi Rivayat, the Saddars, and the Persian Rivayats) and from living usage. They are a mixture of "inner" and "outer" rituals and (unlike the necessarily more public funerary rites) attracted little attention in the past from foreign observers.

There are some imprecise allusions by Greek writers in Achaemenid times, but the first detailed account by a non-Zoroastrian was given by A. H. Anquetil du Perron. This was amplified by Delphine Menant, whose description was further expanded by J. J. Modi. Details in which Irani usages differed from those of the Parsis were later recorded by Ardashir Azargoshasp and Ardeshir Khodadadian. The sedosh rite which was regarded as the most important, having apparently the most ancient component, is that solemnized in the last watch (ushahin gah) of the third night. This, called by the Iranis the yasht-e shavgire, approximately the "dawn service," consists of a set of yasht-e keh, the "lesser service".

The last of these has the dedication (kshnuman) for the "fravashis of the just," ashaonam fravashayo (Pahlavi arda frawash or fraward), and during it food and clothing are consecrated so that their essence may sustain and clothe the newly departed soul in the hereafter. The clothing is called by the Iranis sedra (because it includes the sacred shirt) or shavgire after the service, by the Parsis shiav or simply jame . "New clothes, newly washed" are required, and these belong thereafter to the celebrant priest; hence they were also called jame-ye ashodad . He may keep them, share them with the family, or give them to the poor. All kinds of food may be consecrated except meat, from which the bereaved family abstains for the three days. The goshoda, or sacrificial offering, is therefore represented by eggs.

The special Avestan text for the consecration is the Staomi, that is, Yasna 26 (so called from its first word, "I praise"). This consists of praise and worship of the fravashis, among them those "of all near relatives who have died in this house". In the Yazdi region among the objects consecrated is a coin or piece of silver, a custom going back conceivably to Seleucid times and reflecting the Greek one of placing Charon's obol with the dead.

In the small hours of the third night an animal was sacrificed (in latter-day usage a sheep or goat), and fat from it was offered at dawn on the soul's behalf to a sacred fire. This act is referred to in the Nerangestan and later works as the Hom dron, the sacrifice being consecrated by a dron service. 107). So much importance was given to this offering that Dastur Noshervan Kermani, writing to the Parsis in A.Y. 967 (=1596-97) declared that, if it were not made, all previous ceremonies performed for the soul were useless. The chaharom service was held just after sunrise on the fourth day, its distinctive element being an Afarinagan i Dahman, solemnized as a blessing for the soul at its moment of judgment. Afterward those attending shared the meat of the sacrifice, thus marking the end of the period of abstinence.

In Persia blood sacrifices came to be offered again for the departed soul on the thirtieth and anniversary days, siroza and salroz. The rites of the salroz are then maintained for thirty years as fully as family means allow or piety suggests, and are sometimes continued long beyond this obligatory term. There are references in the Persian Rivayats to reciting the Staomi on commemorative days for the dead, presumably that is, to what Parsis call the Satum rite. This is a domestic one, and consists of consecrating, by recital of Yasna 26, ritually pure food for the soul's sake, a share being set aside for the dog. In pious Parsi families this rite was performed thrice daily (at mealtimes) during the first month, and monthly thereafter, and was then continued in conjunction with the anniversary ceremonies. The observance appears to have been alluded to by Theopompus in the 4th century B.C.E.

The Farokshi ceremony was also regularly performed for the departed. With the accumulation of family rites, pious individuals could thus devote an immense amount of time to the service of the dead, but in duty and affection, not grief, which, unduly indulged in, is a sin for Zoroastrians. Pahlavi and Persian texts give yet other observances that it is good to perform for the soul's benefit: founding a gahambar, paying for the barashnom-e no shabe (the purification of nine nights) to be undergone vicariously, or the performance of the geti-kharid (lit., "world purchased"). The first two are still frequently carried out by traditionalists, the former chiefly among Iranis, but the soul ceremonies generally are greatly curtailed by reformers in both communities.