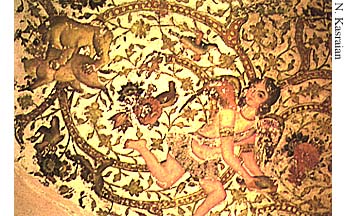 DREAMS AND DREAM INTERPRETATION -- Dreams and their interpretation (khab, roya; khab-gozari), an integral part of the Persian world view, as well as the Shi'ite notion of "inner prophethood" (nobowwat-e baten). Dreams are divided into two main categories: those that occur only during sleep (khab, nawm, roya) and those that occur while awake or in a state of semiwakefulness (waqe'a "vision," roya). They are further subdivided into those that are "true" and "false". "True" dreams include those experienced by believers (mo'menun), saints (awlia'), and prophets (anbia'), both those that require interpretation and those that do not.

A three-part typology of dreams can be drawn from the work of R. G. A. van Lieshout and G. E. von Grunebaum. Type 1 is the "passive" or "enstatic" dream, of which there are three subtypes: a "recognizable" visual perception or a symbolic form; a message conveyed by a figure, recognized by the dreamer; and, less frequently, an "objective record," for example a piece of paper found in the morning or marks on the dreamer's body.

Type 2, the "active" or "ecstatic" vision, is more prevalent in the Islamic and Persian experience than in the Greek tradition; it occurs in a special state "between sleep and wakefulness." The dreamer experiences either unusual ecstasy, awe-inspiring yet with cognitive elements; a departure from the body, often guided by an angel; or transformation into a winged creature that flies to fantastic realms.

Type 3 is the dream that must be interpreted; this type is more often reported in popular literature, where dreams show the way to treasure, warn of imminent danger, or bring cures and the like.

In epic, legends, and popular tradition. In Persian myth and epic literature many dreams of kings and heroes are recounted. In one of the darkest mythic episodes, in the version compiled by Abu Mansur Ta'alebi, the evil king Zahhak dreams of his own demise: Three men enter his palace and kill him. His dream interpreters warn that he is to be brought down by a prince named Fereydun, as yet unborn, whose mother is descended from King Tahmurat. Zal foresees his marriage to Rudaba in a dream. According to the Bundahishn and the Kar-namag, Babak dreams that the sun and moon appear from Sasan's forehead and cover the land. The only named interpreter of dreams in this work, however, is Bozorgmehr, who, while still a youth, gains royal favor by explaining Anoshiravan's dream after the mobeds (priests) have failed.

In the Shahnama, eighteen dreams are reported, most of them not mentioned or in different versions from those mentioned by Ta'alebi. For example, Zahhak dreams of three men who strike him with a bull-headed mace and imprison him on Mount Damavand. Many dreams are predominantly informative, as when a horseman informs Sam that Zal, the son whom he has abandoned in the wilderness, is alive.

Perhaps the most graphic dream recounted in the Shahnama is that of Afrasiab, who sees a desert full of serpents and a sky full of eagles; the wind blows his banner to the ground, and a hundred thousand Iranian soldiers carry him off to Kavoos. The astronomers (akhtar-shenasan) and wise men (bekhradan) then interpret the destiny in store for Afrasiab. Among the few places in the Shahnama where the angel Sorush appears is Goodarz's dream, in which the angel, seated on a cloud, informs him of God's command. The angel provides a nonsymbolic message, which results in action without the necessity for interpretation. In another such "clear" dream Toos sees a radiant "candle" rising from the water; on it Siavosh is seated on an ivory throne, manifesting the full Kayanid glory.

When Ferdowsi himself dreamed that Daqiqi assured him that his endeavors in compiling the Shahnama were not in vain, the dream needed no interpretation because the message was clear, not symbolic. The most elaborate dream episode in the Shahnama, consisting of nine interrelated but separate dreams, is that involving the Indian king of Qannuj. These dreams are, however, symbolic and must be interpreted. The only person capable of doing so is Mehran, a wise ascetic who lives in the wilderness with the animals and eats mountain herbs. According to him, the dreams are a warning of an imminent attack by Alexander, which the king is not to resist.

The only place in the Shahnama where the term "dream interpreter" (gozaranda-ye khab) occurs is in the episode of Khosrow Anoshiravan and Bozorgmehr, in which Ferdowsi also expressed his own views: "Enlightened souls see in dreams all existing things". In the final dream episode reported in the Shahnama Bahram Choobin regains his courage in his battle against the Arab invaders as the result of a dream and rearranges his army effectively.

In Persian legends and popular narratives political authority is bestowed through dreams, as exemplified, for example, in tales about Abu Moslem Khorasani. In one such dream the Prophet Mohammad, accompanied by Gabriel, appears to Abu Moslem and grants him the ax and other regalia of the fotowwa, emblems of his authority. He receives his sword from Salman Farsi. In the Abu Moslem-nama, a romance by Abu Taher Tarsusi, each of Abu Moslem's forty companions, many of them representatives of guilds, dreams of events to come and receives magical powers, so that the blacksmith can make Abu Moslem's sword, the wood carver his ax, and so on.

Abu Moslem's dream of the Prophet is typical of a genre that includes almost every royal figure, including Shaikh Safi-al-Din, eponymous ancestor of the Safavid dynasty, who derived his authority from dreams of investment with miraculous powers. Shah Tahmasb claimed to have seen and conversed in a dream with Imam Ali, who foretold his victories in battle with the Uzbeks and others.

The Ahl-e Haqq still equate true inner dreams with divine revelation. Other Persian legends of this genre are to be found in such popular works as Firuzshah-nama, Darab-nama, Qesásáa-ye Hamza, and Dastan-e Samak-e Ayyar.

Dreams in religion. Dreams have an especially important place in Shi'ism; the infallible imams are all considered to have had "true dreams," which served as sources for their continued inspiration by God, even though revelation had ended with the Prophet. The imams are considered to have been especially adept at interpreting symbolic dreams, which gave them access to esoteric knowledge. A work on dream interpretation, Taqsim, has been widely attributed to the sixth imam, Ja'far al-Sadeq.

According to later Shi'ite jurists, it was a major source of esoteric knowledge. One of the earliest jurists, Mohammad b. Ya'qub Kolayni, whose al-Osul men al-kafi served as a model for development of Shi'ite jurisprudence, also wrote a work on dream interpretation, Ta'bir al-roya. Mohammad-Baqer Majlesi quoted from Kolayni's work on dream interpretation in his own chapter on the subject, where he also referred to Ketab al-ta'bir 'an al-a'emma, a collection of reported teachings on dreams by the imams. One of the significant principles stated there is that the dreams of "believers" are true. The imams or other "signs" may appear to any believer, who will thus also gain access to esoteric knowledge.

The occultation of the twelfth imam, who possessed a higher visionary knowledge, is of special significance in the Shi'ite view of dreams, for he "resides" in Hurqalya, a realm of the imagined world and may thus be "seen" through dreams. Dreams thus inform the believer of "inner" knowledge not apparent when he is awake and not associated with phenomenal existence. The believer must, however, perform certain acts in order to prepare for the imams to appear, inform, and guide him in dreams. The conditions are elaborated at length in several Shi'ite works.

Dreams also play a central role in legitimizing the Shi'ite institution of welaya, that is, the guardianship of the elect over the multitude. This channel is, for example, fully described in Shaikhi literature, especially by Shaikh Ahmad Ahsai, who considered the authority of his own investiture dreams to be undisputed. These dreams were closely paralleled in the visionary experiences of Mohammad-Ali the Bab, who reported a dream in which he drank blood from the severed head of Imam Hosayn . Baha'Allah, too, placed special emphasis on the revelatory function of dreams.