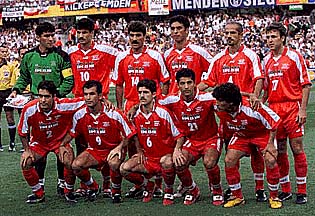 Just before start of match with Germany

Not a total loss

Let's not even talk about the game itself. We did not play well at all. The problem was not that the Germans were so good (they're ranked second or third in the world), rather we BELIEVED they were the best in the world. We were so intimidated that we weren't able to play up to our potential.

But it's all over now. We go home with a 1-2-0 record. Which is not bad at all. I gurantee you: We'll be back in four years and we'll do better.

So we were watching the game here at an Italian cafe in San Francisco. The Iranians had packed the top "lozh (lodge)" section and the Germans sat around in the main hall in the bottom. Eyes glued on the TV sets. Every once in a while one side would shout "Deutchland, Deutchland" and the other answered, "Iran, Iran."

It reminded me of the scene in Casablanca when the German troops started singing their national anthem at Rick's Cafe American and then the customers representing Occupied France (in occupied Morocco, by the way) began out-shouting the enemy with their own patriotic song.

Well, we all know what happened next. The German general ordered Rick's be closed at once!

At the Steps of Rome, however, the rivalry continued. The owner and waiters were enjoying every bit of it (and selling more and more glasses of beer).

When the Germans finally scored, their fans took the upper hand. There were a couple of attempts to raise Iranian spirits with "bacheh-haa hamleh konin...(attack boys, attack)" (as if...). But Germany's second goal took care of that as well. Discounting the occasional angry screams in frustration, silence took over the Iranian group. We didn't feel any better when the German fans made faces at us.

So we're sitting there, basically waiting for this torture to end. One of the Iranian fans put his hand by his mouth and whispered something to the guy next to him. O oh. I smell trouble, I thought. What sort of conspiracy is being hatched here? Whatever it was, I hoped it wasn't going to be too ugly.

The guy turned to the Iranians fans around him and said in Persian, "When the game ends, let's all stand up and congratulate the Germans."

Frankly, I was shocked. I for one, was in no mood to congratulate any one. But there you go...

When the game ended, another surprise: The Iranians AND the Germans stood up simultaneously and cheered each other. I gotta get out of here, I thought. Too sweet for me to handle...

But as I drove back home, I thought less and less about today's loss, and more about the whole World Cup experience. What is certain is that the world now has a different view of us. And for that, we must thank the players and the fans.

P.S. The owner of the Steps of Rome tried to console us after the defeat. "Don't worry," he said in his thick Italian accent and a big smile. "We'll take care of the Germans in the next round."

And we couldn't contain our laughter.