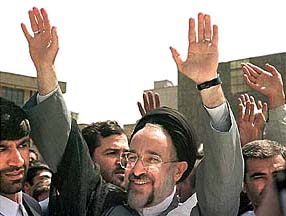 Beyond hostile fanaticism: Iran's geopolitical importance is greater than Iraq's, and the challenge it represents is more complex. Given the American military presence, Iran does not currently pose a threat of military aggression, but its long-term policies could destabilize the region.

Several areas of Iran's behavior are frequently cited as sources of concern: its conventional military buildup, its opposition to the peace process, its promotion of Islamic militancy, its support of terrorism and subversion, and its quest for nuclear weapons. Terrorism and nuclear weapons, especially the latter, directly threaten U.S. national interests. Both issues, however, can be addressed by specific policy instruments, rather than the current crude and counterproductive attempt to cordon off the entire country. A more nuanced approach could yield greater benefits at lower cost.

Concerned about traditional military threats to regional security, some observers have worried about increases in Iran's conventional military capabilities. So far, there is little reason to believe that Iran's conventional build up will pose a direct challenge to U.S. regional supremacy. And for years to come, the United States will retain the capability to rebuff any such challenge.

Continued progress in the Middle East peace process is indeed an important American interest. Still, opposition to that process by another country should not be grounds for international excommunication. Israel itself has found it useful to have dealings with Iran on various occasions, most recently with the help of German mediation, and the United States should not feel constrained from doing the same when its interests so dictate.

Although Iran has often used religion as a cloak for subversion and terrorism, the United States must be careful not to demonize Islam, worrying simplistically about a "green menace" comparable to the old red one. The Iranian regime, unable to govern effectively, has lost appeal both at home and abroad. Sectarian, ethnic, and geographic cleavages with the Islamic world militate the rise of a unified Iranian-led threat.

Iran's support of violence and subversion abroad should, however, concern the United States. Iran has provided backing for terrorists and fomented unrest in other countries, and the international community should continue to harshly criticize Iran for these acts. Direct attacks on American citizens would constitute a special provocation and call for clear retaliatory measures. As a response to terrorism in general, however, containment is not a solution.

The single most worrisome aspect of Iran's behavior is its apparent quest for a nuclear weapons capability. The United States should respond by pushing the controls and inspection provisions of the existing nuclear nonproliferation regime to their limits and continuing to make counterproliferation efforts a top priority. It should focus more narrowly on the nuclear threat as opposed to other issues, which might strengthen its case for controls and achieve greater success in stemming the flow of support for the Iranian nuclear weapons program. Finally, it should explore the notion of using carrots in addition to sticks in getting Iran to shift course.

There seems little justification for the treatment the United States currently accords Iran because of its nuclear program. Instead of simply punishing the country, the United States should consider whether a tradeoff might be feasible in return for Iran's acceptance of restrictions on its civilian nuclear program or intrusive inspections by the International Atomic Energy Agency of its nuclear facilities. Since the economic rationale for nuclear power has diminished in recent years, it may be possible to get Iran to limit its civilian nuclear energy program enough to give outsiders reasonable confidence that further military progress is not being made. Such an outcome, possibly arranged with Chinese or Russian support, would leave both the United States and Iran better off and significantly ease tensions in the region.

The policy of unilateral U.S. sanctions against Iran has been ineffectual, and the attempt to coerce others into following America's lead has been a mistake. Extraterritorial bullying has generated needless friction between the United States and its chief allies and threatened the international free trade order that America has promoted for so many decades. To repair the damage and avoid further self-inflicted wounds, the United States should sit down with the Europeans, the Japanese, and its Gulf allies and hash out what each other's interests are, what policies make sense in trying to protect those interests, and how policy disagreements should be handled. Only such high-level consultation can yield multilateral policies toward Iran that stand a good chance of achieving their goals and being sustainable over the long term.

Another area of common interest is the resuscitation of U.S.-Iranian commercial relations. To this end, Washington should be open-minded regarding the resumption of activity by American oil companies in Iran. In 1995, for example, the U.S. government forced the cancellation of a $1 billion deal between Iran and Conoco; this served no one's interests except those of the French firm Total. Future commercial deals should be evaluated on an individual basis and permitted unless they contribute specifically to Iranian behavior the United States opposes.

A nuanced containment: However one judges its achievements to date, dual containment cannot provide a sustainable basis for U.S. policy in the Persian Gulf. A more nuanced and differentiated approach to the region is in order, one in tune with America's longer-term interests. This new policy would keep Saddam boxed in, but would supplement such resolve with policy modifications to keep the Gulf War coalition united. The new policy would start with the recognition that the United States' current attempt at unilateral isolation of Iran is costly and ineffective and that its implementation, in the words of one recent study, "lacks the support of U.S. allies and is a leaky sieve." The United States should instead consider the possibilities of creative tradeoffs, such as the relaxation of opposition to the Iranian nuclear program in exchange for rigid and comprehensive inspection and control procedures.

This new course would involve a dramatic policy reversal and is not likely to yield vast benefits in the immediate future. What it would do is enable the United States to sustain its policy and keep options open for the long term. America may have to consider modifying certain aspects of Iraq's economic containment to keep its military straitjacket securely fastened. On the other hand, flexibility would facilitate diplomatic contacts, presuming an Iranian interest in better relations. Absent such statesmanship, it is all too likely that U.S. policy in the Gulf will continue to be driven by domestic political imperatives rather than national interests, with the hard line of recent years making long-term goals increasingly difficult to achieve.

The foundations of America's policy in the Persian Gulf should continue to be a commitment to ensuring the security of its allies and protecting the flow of oil. Few doubt that the United States has the power to sustain this commitment, but some question whether it has the will. In such circumstances, a recommitment by President Clinton to the principles of the Carter Doctrine -- a renewal of U.S. vows to the Gulf -- might be both welcome and appropriate. It is imperative that all parties understand an important strategic reality; the United States is in the Persian Gulf to stay. The security and independence of the region is a vital U.S. interest. Any accommodation with a post-Saddam regime in Iraq or with a less hostile government in Iran must be based on that fact.

A minimum of good will -- American leadership, and Iranian good will are essential to reach a trade-off. By Henry Kissinger
* THE IRANIN Opinion section
* Iran News
* Complete list of Iranian online media