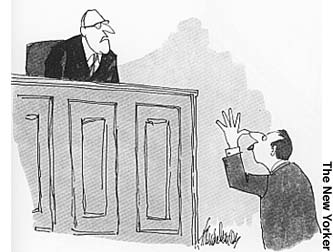 "Mister, you're really asking for justice!"

Forget the Islamic Republic...
What about MY rights?

A couple of Fridays ago, all was well at the Second Biennial Conference on Iranian Studies is Bethesda, Maryland. I was listening carefully to the panelist talking about the Iranian economy. Then, when it came time for Dr. Hooshang Amirahamdi to speak, a man stood up in the crowd and started objecting to the panelist. Another man quickly joined him in another corner of the room. Soon, yet another man and a woman banded with this orchestrated cacophony, denying the speaker the ability to talk.

The audience objected, but the four Mojahedin Khalq (MKO) members continued to shout and disturb the conference. Nothing seemed to restrain their determination to prevent Dr. Amirahmadi from making a public presentation.

They shouted that "this is America," and in the name of their First Amendment rights, they will not allow the man to speak. They accused Amirahmadi of being a covert agent for the Islamic Republic and that he is "going to talk about blood not oil." Amirahmadi stood calmly without responding to the accusations. Why should he? This was not a trial. Again, the audience, including myself, objected and said that they wish to hear him anyway. To no avail.

The actions of the MKO members did not surprise me. They had pulled a similar stunt a few weeks ago in London. What did surprise and disappoint me is the conference organizer's decision not to have security remove these hoodlums. Allowing them to get away with such acts can only serve to encourage repetition.

One of the men screamed that the Islamic Republic was responsible for murdering four of his brothers in cold blood. I can feel great sympathy for that, if it is indeed true. I really can.

But, this letter is not meant to discuss the oppression that takes place in Iran, nor to defend or defame Amirahmadi. There is another issue being taken up here. (Still, at the risk of being called a hypocrite, somehow I feel much more sympathy for the young Iranian men who died by the bullets and grenades of the MKO who fought alongside the Iraqis during the war.)

Perhaps if we were in a country where there was little chance for the four to protest in a civil manner, I would even admire their courage to stand up and scream. Yet, as they said, this is America! There are plenty of ways to express protest, but taking away MY RIGHT to hear a person speak wins no sympathy from me!

If you think someone is blaspheming, lying, or even is the very personification of evil, protest! Protest by standing outside the conference and holding a vigil. Hand out flyers voicing your view. Write a piece and publish it The Iranian or other media. Boycott the conference and encourage others to do so. Hell, hold up signs in the room voicing your opinion without infringing on another's. But don't you dare insult me by stripping me of my right to listen to a talk in the name of the U.S. constitution!

So, if any of you four or the rest of your group is reading, listen closely:

Read the U.S. constitution and especially the Bill of Rights and try to understand it! You looked ridiculous out there silencing a man in the name of free speech. As far as I am concerned, there is little difference between the actions you claim to protest against, and your own grotesque violations of not only Amirahmadi's right to speak, but the entire audience's right to chose who to listen to.

Learn what democracy and pluralism mean, before screaming out slogans. If you complain about the injustices of a regime, do so without committing the same acts you "protest" against. It makes no difference if people's rights are taken away by the Islamic Republic or the MKO! There is NO line distinguishing YOU and those you claim to be battling.

Perhaps we Iranians are not always afforded to battle those who strip us of our inalienable rights back in Iran. Don't expect the same silence if you try to deny me my rights here. I don't care in whose name you do!

I will finish with a final comment. I don't like the MKO one bit. It is very hard to forgive the actions taken by this terrorist group. Even so, should they denounce terrorist acts, and take up non-violent means to express their beliefs without trampling on that of others, I will be extremely respectful of their First Amendment rights. We may not like what is said, nor the person who says it, but the right to free speech is not to be denied!

* Opinion
* Cover stories
* Who's who
* Bookstore