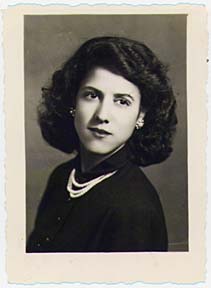 "Have you seen these pictures?" Cheri asked. Probably, I thought. Probably too many times. "Which ones?" I said, giving in to her wish to show them to me just one more time. I'm so glad I did.

The difference this time was that she was showing me her pictures, instead of me looking at faces and places from a time I knew little.

"That's my first car, a Vauxhall." She rubbed her hand over the picture as if she was touching the car the day she picked it up at Khorramshahr's customs. "I was the first woman in Abadan to own and drive a car. And I paid for it all with my own money. I saved up my salary at the oil company for more than a year..."

For as long as I can remember, Cheri has loved cars and driving. Whenever the family goes out somewhere, she will be behind the wheel. But she has never had an exotic car. Her current one is a Toyota Corolla, "an excellent car," she says. "Very reliable."

She turns the page. "Here's mom and dad and Bahram.... and that's your father Manouchehr, who had just come back from America..."

She points at a picture of young girls on a track. "I was a champion sprinter and swimmer," she says. She won state titles in Khuzestan and the national level, if I remember correctly. "I was a rascal!... So playful... So shaytoon, noch, noch, noch..." She shakes her head and smiles, with a long sigh. "Why do we get old?"

She turns the page. "My school... God knows how many times I got sent out of the classroom for making the kids laugh! Here we are in the main square..." Is that Reza Shah? I guess so. And here she is all grown up. Only a few years later she falls in love with Yaqoub and they get married. Yaqoub's family were Iranian immigrants in Burma.

Amir suffered brain damage from meningitis when he was around ten. "If he had not become sick he would have been a great man," she says with confidence. She has taken him to every specialist, tried every prescription. She even brought a healer all the way from India to bring back his health. "Look at him. Such a smart boy... and healthy. This was the best period of my life."