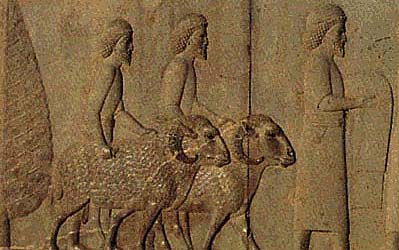 In the old days: Off to visiting friends and relatives

Noruz is a time of rejuvenation in Iran. It's a time for spring cleaning, planting flowers in the garden and buying new clothes. A few days before Noruz, a remarkable change in nature takes place. Fruit trees blossom and cities become blanketed with the entoxicating aroma of a cloud of pink blossoms. Following nature's lead, Iranians shrug off the winter duldrums and come to life as well. They begin 12 days of a fantastic custom called eid-didany: Visiting family and friends.

They remain undaunted by the fact that their extended families and friends could easily number in millions. They still must visit every single one of them. The families may live in other towns and other countries, or indeed they may have been abducted by aliens and may reside on other planets. Still, Iranians must visit everyone during Noruz. For 12 frantic days, people exchange visits euphorically. Often enough, you can't visit everyone during those 12 days, and so you must schedule some time after Noruz to make your visits. I know people who're still catching up with their overflow visits from 40 years ago. This is all because Noruz is a time for joy... and overeating.

The major difference between Christmas and Noruz is the guilt factor. After Christmas you're bombarded by reminders of how it's time to pay for your overeating sins and make a resolution to not eat another bite for the rest of the new year to lose the weight. Now, contrast that with Noruz. The Iranian hospitality requires the hosts to lavishly treat their visitors to large piles of fruits and dishes full of pastry and nuts strategically located in the middle of the living room so that during your whole visit the food would be staring you in the face.

This custom isn't limited to Noruz, by the way. It could be for the slightest of reasons. You could stop by to pick up a book from you neighbor's house, and you're instantly dragged inside and are told to eat goodies or else. And you will do so if you're interested in walking out of there intact. The funny thing is as you leave, the hosts complain bitterly that "you didn't eat anything." Furthermore, no matter how many years and how many thousands of dollars (equal to billions of rials) they spent to prepare for the elaborate feast, they'll be sure to remind you that "it wasn't ANY trouble whatsoever." Okay, then. And don't try to argue with that. Because they may use force to convince you that it was no trouble.

During Noruz round robin of visitations, you eat lots of nuts, fruits and pastries sitting after sitting in the course of your eid-didany, but there is no guilt afterwards. In fact, the hosts make sure there is guilt only if you don't eat. You get fatter every year until when your arteries clog up sufficiently and you drop dead. Then your family throws another big get-together with more great food -- dates, halva and chelo-kabob. (The difference between life and a funeral is that in life, first you eat and then you die, while in a funeral first somebody dies and then you eat.) You just eat your fair share to accelerate aging and contribute to the cycle of partying, dying and partying some more.

The ironic thing about Noruz and eid-didany is that even though we may not have room to eat any more after our first two stops, we keep stuffing our faces because we don't want to offend our kind hosts. Who would dare say to their hosts "look, I ate four oranges and three bananas over at Ozra Khanoom's, and a few pastries over at Tahereh Khanoom's, and a few bowls full of nuts over at Alieh Khanoom's, but I don't have any room for YOUR food." We don't even try that logic. We just force feed ourselves because we know if we refused, our hosts would attack and grab us, hold us down and then stuff large pieces of fruits and pastry down our throats. So, why not just cooperate?

These social traditions can be quite stressful to most. But my friend, Shapur, manages the stresses of eid-didany very well. Shapur plans his own visits for mornings only and his guests' visits to his home during afternoons. He doesn't eat any breakfast and starts his visits at 9 AM sharp. He makes three visits, each one of which takes only 45 minutes. Like clockwork, during those visits Shapur fills up his plates with fruits and nuts and nibbles on some of it, which pleases his hosts, and then when the host is not looking or is out to get some more tea (so they could force you to eat more pastries with it) he empties the rest of the goodies into his large pockets, especially designed for this purpose.

He then heads back home and uses the goodies he looted during his stops to fill his serving dishes for his afternoon guests. Of course, chances are his guests who have been visiting all day long are already full and won't eat any of his goodies, but still, you have to be prepared. With this scheme, he doesn't have to eat much, and he doesn't spend any money or time buy goodies during these economically stressful times. Of course, from time to time he does get into trouble.

Once, his last host of the morning asked him to stay for lunch. Shapur refused. The host insisted. Mortified of ruining his already tight schedule, Shapur tried to leave. The host, however, was unusually persistent and aggressive. The host hid Shapur's shoes and locked the living room door and made it clear Shapur was not leaving until he ate the lunch. When Shapur tried to leave through the window, two armed guards outside the window arrested and pepper sprayed Shapur and dragged him to the dining room with the table already set with the largest assortment of foods he had ever seen.

It was horrible, he says. He swore to himself if he ever got out alive, he would sue his hosts for excessive hospitality. As a last resort, Shapur faked a massive heart attack and left on an ambulance. It all worked out though as the ambulance driver turned out to be among his afternoon guests who had a fourth job as an ambulance driver to amend his meager salaries from his other three jobs. So not only did Shapur dodge the unplanned lunch, he got a ride home in time without disrupting his busy schedule.

Of course, his ambulance driver friend was enjoying Shapur's hospitality so much, he wasn't about to leave. Shapur began to panic. Dinner time was arriving and the guest was still deep into conversation with no talk of wanting to leave. It just so happened that Shapur had to be somewhere for dinner. So, he had to resort to using another patented scheme. Ordinarily, he would have threatened to show slides from his last trip, but in this case, he began to talk about money and how he needed to borrow a large sum of money for some loony get-rich-quick scheme (something about a nursing home for retired dairy cattle) at which point his guest all of sudden seemed to get drowsy and excused himself.

* The Noruz Tradition - By Mani Farhadi
* A very royal Noruz: In the court of Nasreddin Shah
* THE IRANIAN Features section
* Bookstore
* Cover stories
* Who's who