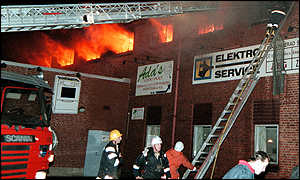 Inferno in Gothenburg
Sweden's desire to face the issue of immigration

Just four days before this tragedy, I was at the GothenburgThe Fortune Catcher, about the Iranian Revolution. When I returned to the U.S. and heard about the fire, I thought of my new Swedish friends — not just those whose ancestors were Vikings, but those who recently emigrated and whose children speak Swedish like the natives they have become.

The origins of the explosion at the disco and the sweeping fire that followed it, killing 65 people, is still a mystery. Maybe arson, maybe a poorly-wired sound system. Whatever the cause, Swedes are sure to be wondering if such violence has racism connected to it. They think about that; about why their immigrants huddle in towns and neighborhoods of their own, about whether it's fair to consider these swarthy outlanders as a drain on the generous Swedish welfare system.

When my Swedish publisher invited me for an author tour, I was surprised, excited, and perplexed. Who, in Sweden, would be interested in the plight of exiles and refugees of Islamic fundamentalism? When I thought of Swedes, I thought blond, blue-eyed, stoic descendants of the Viking explorers, of the neutral, non-imperialist World War II Swedes. Well, I surmised, they must be readers. Way up there in the darkness of winter, they escape into books, perhaps especially books that will take them to foreign lands in the way their forebears had sailed there on masterfully-built teakwood ships. In addition, everyone knows the Swedes are well-educated, having an enviable public school system that teaches children several languages as resolutely as math and science and literature. And they have the Nobel Prize, of course. I was impressed at their interest in Iran and felt grateful to be asked to further enlighten them about Persian culture, especially since I hadn't received the same kind of heightened interest in Melting-Pot-America.

When I arrived at Stockholm's Arlanda airport, I stood in line for a cab to take me to the Royal Viking Hotel. The driver was from Tehran. He'd escaped the Iran-Iraq War and brought his family to Sweden thirteen years ago. His only complaint was the weather. His children thought of themselves as Swedish, sort of. They certainly didn't think of themselves as Iranian anymore. Didn't I know that there were 60,000 Iranians living in Sweden today? So much for my expertise on Iranian exiles.

I'm half-American and half-Iranian, blond and blue-eyed, more Swedish- looking, in fact, than Middle-Eastern-looking. My book, however, is very much about Iranians, most especially those who experienced the difficult aftermath of the Islamic Revolution in 1979. At my Swedish publication party, my publisher hired a TV talk show host to read from one of my book's opening scenes that recounts the gruesome public stoning of two Iranian women for adultery. Representatives of the Swedish government were there, faces horrified, drawn and saddened. Questions of culture and identity, of exile and immigration, of women's rights abounded; I soon realized the Swedes were grasping at me — as if I could be a bridge that might help them understand the rainbow-like transformation of their country. I admired their sensitivity and their honest desire to face the issue of immigration.

The following week at the book fair, however, I glimpsed a smudge in the rainbow. I met an Iranian man who had owned a small bookstore in Stockholm in the 1980s. He sold books in Farsi, English, and Swedish. His store was vandalized five times until he finally gave it up. He couldn't say who struck the store, maybe each time it was a different group. It could have been Moslem fundamentalists (this was during the time of the Rushdie fatwa and the man had refused not to carry The Satanic Verses), or it could have been the skinheads — ferocious fundamentalists too. Anyway, he had chosen Sweden fifteen years ago when he escaped Iran, and Sweden is where he had made his home, for good or bad. He figured he was lucky to not have chosen somewhere like Germany or France where the racism is even more blatant and fierce.

Susanne Pari is an author living in San Franscisco's Bay Area. Her latest novel The Fortune Catcher is now available in paperback. (See feature in The Iranian) Go to top