A small piece of the world (5)

When it came time for me to enter Pakistan, I looked back across the border back to the world that had stolen my heart and soul; India is its own world – a mini-planet. With my Iranian passport in hand, I hid my American Passport deep in my bag. To enter Pakistan I wanted to switch to my Iranian passport because I would not be able to enter Iran using my American passport – in fact, I was afraid they would confiscate it. The Pakistani officials weren't happy with me switching passports and refused to sign it – I explained my situation and the tall Punjabi guards eyed me down over and over before denying me my first stamp in my shiny, maroon Iranian passport. I was nervous but knew that this, like every other issue in my journey, would somehow work itself out.

I was in; I had left the world of India and had now entered what I consider the Middle East. I have to admit I wasn't particularly happy about this. In my head, the phrase “Middle East” conjures up images of veiled women, religious zealots, flat and sandy terrain, and a stifling social environment. However, I soon learned that this was not entirely true.

I was traveling with Brett, an American friend I met while teaching English in Dharamsala. Being of Middle Eastern descent, I guided us through Lahore to Iqbal Park (Lahore's equivalent of Park-e Mell-li) and we noticed the stark difference between the chaos of India and Lahore's half-hearted attempt at organization. While walking through the old city portion of Lahore, I heard a Muslim prayer over a loud speaker for the first time since my last visit to Iran, five years before.

Brett and I stopped in a small hole-in-the-wall restaurant where we became a spectacle for a while and passer-bys stopped to see what the commotion was about. I heard a few Persian words and my heart leapt – was I mistaken or did I just hear the sweet ring of my mother's tongue? It was in that small shop that I learned of the large number of Afghani refugees in Pakistan (and Iran) and their version of the Persian language. I was enchanted! It felt so good to speak Persian and it was a trip to hear them speak it the way they did! Drinking tea, laughing at my ignorance, and happy to translate what they were saying to my American friend (a treat while traveling off the beaten path), all of a sudden a man comes into the restaurant with a huge falcon perched on his shoulder! Their pet! Its wings were clipped and they placed the once-majestic creature on my head and hand for me to play with.

We walked along the streets, people stared at us and started up conversations, which at this point could get monotonous. I would tell people I was from Iran and that brought a surprised look to their face and more questions, the first invariably being “Are you Muslim?” (to which I was answering 'yes' to at this point, just to be able to walk away in peace). Then a young guy walked by us, in our direction, and says “HELLO!” and we do the same and after a few yards he stops with three bottles of coke and we share them. He's a 20 year old named Shahid who works at a milk shop and loved showing us his muscles because he lifts milk all day, and he bragged about his fighting skills and scars. He had twelve brothers and sisters. Well, I guess business was good because this guy wouldn't stop buying us stuff, even dinner at the end of the night (which he didn't eat). No matter what we did, he paid for it. He was a cool guy, we had some fun just lounging around the city.

There were very few tourists – the few that we did see were young Japanese men and women. They stuck together in groups and didn't socialize much outside of their culture.

Brett and I went to Islamabad and made a visit to the Iranian consulate there who was very helpful and overjoyed to meet with me! Let me tell you how fantastic it was to walk into that embassy and be greeted with traditional Persian sheer-ni and cha-ii and have this consulate speak to me in recognizable Persian. After so many months, it was great just speaking with him. I was getting advice for entering into Iran as well as trying to get my American friend Brett a visa to enter my homeland. It didn't work. They would simply NOT grant him a visa without an immeasurable amount of work. In the end we had to separate because he could not follow me to Iran. I was sort of glad to separate, though; I was used to being alone and I wanted to experience Iran alone. I love traveling by myself but I enjoy a week or (maybe) two with friends here and there along the way.

I had originally planned to explore the beautiful mountains of northern Pakistan (and the infamous KKH) and do some more trekking, even hitting up Peshawar and the notorious Smuggler's Market. However, after a bit of deliberation while I was in Islamabad, I decided to take the next train south towards Iran and cross into Iran as soon as possible. I missed familiar things – language, culture, custom – the thought of sleeping at my grandmother's house in Tehran with a belly full of Lubia Polo was just too tempting. I was heading “home”…

I just took a look back at the diary I kept while I was traveling. It's fun and interesting to read what I wrote about the places while I was there. Here is an funny line from an entry I wrote while Brett and I were in Islamabad: “Last night we splurged and had pizza at a pseudo-American restaurant, it was fun. The next day we went to KFC for a sec and I freaked out. I stopped in my tracks and turned around and had to get out. Those 5 seconds are burned into my head/memory.” I still remember those five seconds: I had just opened the door and took a look around at the inside of this KFC and I almost threw up – I turned around and ran out, with Brett close behind me. It was the most striking reminder of Western culture I had seen since Spain.

Also while in Islamabad, I went to the Ministry of the Interior and had my stamp transferred from my American passport to my Iranian – what a relief! I was ready for Iran! The day before I got on my train bound for southern Pakistan I met an Iranian named Mohsen from Mahshad. We talked and talked and he laughed at me when I told him I was going to Iran dressed like I was currently dressed. He simply wouldn't have it and thought I was joking. He took me down to a shopping area and we bought me clothes from a used clothing stall on the street. I was wearing jeans for the first time in months and I even had a shirt with a collar. I felt uncomfortable taming the wild afro formerly known as my hair… but I did all this to get into Iran.

On the way to the Iranian border, after a 34 hour train ride (yes that's 34 hours in a wooden box on wheels), I stopped for a few days in a town in the middle of the Baluchistan province: Quetta. The blend of people in this town overwhelmed me. The faces I saw in this town were one of the most amazing things I had seen during my entire trip. Mongolian complexions, green eyes, dark skin, blue eyes, light skin, skinny, tall, fat, short, it was one huge Benetton commercial. I gawked at them as they gawked back at me – the feeling was mutual. Talk about beautiful peopleÖ

After September 11th, I watched CNN when I got a chance and caught glimpses of crowds in Pakistan demonstrating. One city that kept popping up over and over again was Quetta. Seeing those scenes on TV sent a shiver down my spine every single time. I remember walked the streets in Quetta – by the time I left I knew the city quite well; I had walked around much of it and had a map with me at all times. I remember visiting the various bookshops, visiting the local university, riding the buses, hanging out at the bus station. I think that if I was there now my feelings would be very different, if I would have even made it out of there alive. It brings me great sorrow to write that previous sentence.

Along with Shane, an Australian guy I met while in Pakistan, I rode the bus with what seemed like sixty Afghanis to the border of Pakistan and Iran. I will never forget that bus ride from hell. First of all, we stopped at apparently random places in the middle of the night in the lawless land of Baluchistan and old men with rifles taller than they were would come and sit next to me, staring straight ahead. It seems that you needed a rifle just to walk around this desert. Second of all, the bus was so packed I couldn't believe it – and people carried what seemed like ALL of their belongings with them. From apples to shoes to stereos to TVs to ghalyuns to I-don't-know-what… people slept three to a seat, in the one-foot-wide bus aisle, anywhere! And I am 6' 4″, it is already a rough ride no matter where I am. We stopped every

two hours so everybody could get out and pray and then we would get back in and drive down like madmen to the border. We stopped for places for dinner in the middle of the desert and I would buy bottled water that looked like it had been under the counter for the past 10 years. It was quite a trip.

We finally made it to the Iranian border. I could barely contain my excitement! I gave Shane my American passport because I didn't even want it to be on me in case they searched me. Shane went ahead with absolutely no problems. He went on ahead and I told him I would meet up with him in Bam. I got to the counter to have my passport stamped and the official looked at me. I smiled hopefully back at him and he smirked and said in perfect Persian “You are going to have to step into my office…”

Next week I'll talk about my wonderful journey from one end of Iran to the other, with a long stay at my grandmother's house in Tehran. Until then. 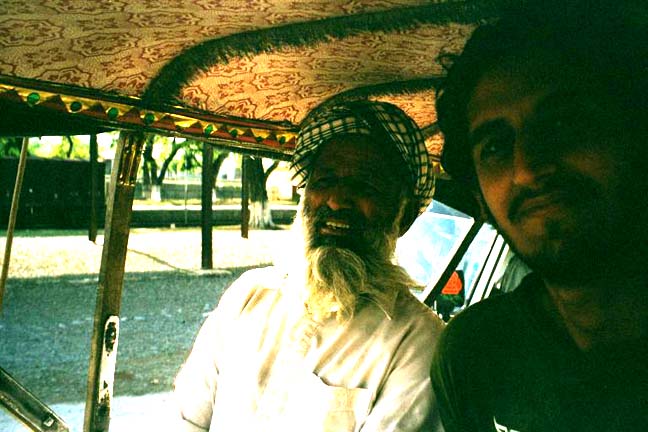 Catchin' a ride with a local man on his horse-drawn cart. These guys never shaved a day in their lives. Their beards swayed in the wind, they were great!