Best of both worlds

The only plausible explanation for categorizing music, is to make it easier to find what you are looking for in music stores. But in the case of
Axiom of Choice, you would still have to search under New Age, World Music, Middle East, International, Ethnic Jazz, World Contemporary, and Fusion, before you give up and ask the store clerk for help.

With three critically acclaimed albums to their credit, and the 4th Annual NAV Music Award for Contemporary World Music Album for their 2nd album “Niyayesh”, they have managed to tread on international grounds rarely visited by Iranian based bands. 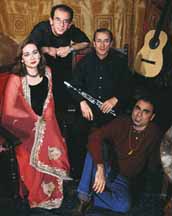 Axiom of Choice band members converse with their global audience in the universal dialect of music, but each with their culturally inherited accents from Iran, Armenia, India, Greece and the USA.

With lyrics ranging from Omar Khayyam to Sohrab Sepehri, a diversity in instruments from traditional Armenian Duduk to synth effects on quarter tone guitar, relaxing “Walk by the Lake” soundscapes to complex “Rhythm Riddles” in 10/8, and “Radif Navazi” to Modal Jazz improvisation, Axiom of Choice take their captivated audience on an astral journey through time.

Fortunately the list of Iranian-based music groups which are breaking new ground in similar genres is growing every day; Ghazall (Keyhan Kalhor), Bijan Chemirany, Sussan Deyhim , Lian Ensemble, Jamsheid Sharifi, Hafez Modirzadeh, Avijeh, Foojan, Probe, Vas (Azam Ali), and non-Iranians like Simon Shaheen, have all drawn the attention of international audiences to their inspired experiments in rhythmically fusing the melodic spirituality of Eastern music with the rich harmony of the West.

But what makes
Axiom of Choice stand out among the crowd, is their realistic perception of their audience's aesthetic needs, and the honest expression of their artistic beliefs through their compositions.

Many Iranian world-music groups purposefully stay away from lyrics and vocals, or over-emphasize on their instruments and technical abilities as an indispensable component of their structure, aiming to impress rather than express. In both cases, they lose vital connections with their audience which hinders the emotional energy transfer between them.

Iranians love lyrics and always give full credit to the vocalist, and sadly it has always been “the singer not the song” in our culture. Even in today's traditional Persian music, while superb musicians such as Pejman Haddadi and Hamid Motebassem are masters of their crafts, the absence of a master vocalist such as Shahram Nazeri would discourage a major part of their audience from attending a
Dastan Ensemble concert.

But Axiom has established a democracy where each member and each instrument has an equal responsibility in leading and supporting the music. Axiom utilizes lyrics sparingly and treats Mamak Khadem's evocative vocals and wordless but soothing ululations as an equal musical instrument, and not as the main attraction. This “less is more” approach leaves musicians and non-musicians satisfied, yet still longing for more.

The virtuosic passages of Rubik Haratunyan on clarinet can leave any listener breathless. Hailing from Iravan in Armenia, his improvisations are based on “Taklif” which is a method of defining modes very similar to Persian “Gusheh” and “Magham”. There are a lot of common “Taklif”s with Persian music e.g. “Shushtari”, “Bayat Shiraz”, and “Chahargah”, but the ornamentations are distinctly Armenian and do not include the 1/4 note as part of the scales. Even so, the passionate pleas and calls and responses between Rubik and Mamak, are one of the highlights of their concerts.

Another important characteristic of their style can be seen in their conscious approach to studio recording versus live performance. The architectural layering, dynamics frequency management, and lulling sound effect backgrounds of their studio versions aim at the subconscious of the busy-minded modernized listener.

Ramin Torkian, co-founder and artistic director of
Axiom of Choice, lays down the major part of the musical framework like a script writer for a film. He defines the time signatures, writes the main themes and melodies based on his ideas and inspirations, and then sets about creating room for spontaneous dialogue between the cultural characters in the group's musical instruments. He chooses the modes for improvisation to allow a smooth transition between these scenes, yet allows the musicians to find their voices and add their creativity to their parts.

But being well aware that this method would bore a live audience, the group takes full advantage of having the complete attention of the listener in their concerts, and perform and improvise in a more daring manner and at adventurously higher tempos.

Axiom of Choice band members easily interact with their live audience with their dynamic stage presence and skillful control over their sounds and instruments. Listening to their music invokes both a sense of security and accomplishment, as it heralds the fact that they have found a balanced formula for the elixir of ethnic fusion music.

The ease with which they flow through complex time signatures such as 13/8, 15/8, or intricate offbeat changes on songs like “Ancient Sky” (8th track from “Unfolding” ) and the spiraling middle transition in “Chaos of Paradise”( 2nd track from “Niyayesh”), makes it seem so natural and effortless, that the listener can sit back assuredly and let them lead the way through the rhythmic challenges.

The remarkable flexibility of Persian poetry in fitting snugly into these compound pulses only adds to the fascinating experience. Their audacity in pushing the sonic boundaries of tradition and creating contemporary pieces out of conventional patterns is admirable.

With the creation of the quarter-tone guitar, Ramin Torkian has even further expanded his musical palette. Basically, the structure of the quarter tone guitar is exactly the same as a nylon seven-string classical guitar, but with twice as many adjustable “gut” frets, the same type of frets used for Persian “Tar” , to allow “Radif” based performances.

He is also well aware of the band's current position and sees a challenging future ahead for them: “The world music is changing very rapidly. The methods of recording and musicianship are getting refined just as fast. As an artist I am not only interested in my contribution to Persian music, but also how my work is scoring with the world music audience as well. I believe that we are now at the point that the fusion must be as invisible and fluid as possible.”

Axiom of Choice's latest album ,”Unfolding”, clearly shows their growth in music production and their wary use of modern sound engineering techniques in fusing the rich cultural elements the band falls back on.