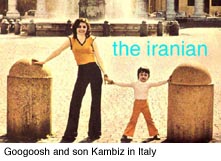 In 1973 Googoosh went to Italy, one of many journeys of self-discovery she made in that era. She took part in the annual San Remo Music Festival, which to this day is one of the oldest Pop music traditions in Europe. The annual festival brings together contemporary Pop stars for concerts, awards, and a paparazzi feast, culminating in the best of the festival being preserved on a commemorative album. More recent attendees have included Madonna, Britney Spears and U2.

Back then, Googoosh virtually owned the San Remo festival. She was the toast of the town. At the end of the festival it was decided that two albums would be made, one in the standard Italian and another in Spanish. All the best singers from the festival were invited to record on the album. Googoosh was included in 6 out of the 14 songs — but not just the Italian album, she was also the Spanish one as well!

If you are a Googoosh fan, you might not think much of this feat, but to put it into perspective, no other non-European singer was included in the albums and everyone at the festival marveled at the quality her voice and ability to sing in perfect Italian and Spanish!

His efforts finally paid off in a used-records web site where he managed to snag rare copies of these gems. Kumars didn't stop there, he contacted an Italian friend of his to help translate the songs as well.The friend listened to the songs and immediately asked Kumars who it was. When Kumars told him it was Googoosh, an Iranian pop singer, the friend did not believe him. Her accent was too perfect and he marveled at her ability to blend her voice to that of a perfect Italian. The obsession infection had now infected him, and now he is a fan.