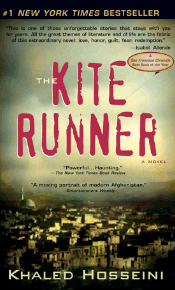 A couple of year have gone by since the The Kite Runner was published, but the book remains a best seller. Those of us who enjoyed Hosseini’s first novel have been eager to read his next book, while, film buffs look forward to the upcoming movie based on his first. As soon as A Thousand Splendid Suns hit the shelves at our local bookstore, I bought my copy, but this time I also paid the extra $ 5 for a ticket to his book signing event due the next month.

The Kite Runner told a touching story about two boys in Afghanistan and their peculiar friendship. I remembered meeting the author at Warwick’s book store, where eight of us, along with a few members of Dr. Hosseini’s family attended a small gathering. I also remembered my conversation with him about his experience in Tehran, during his father’s assignment as the ambassador. Touched by the compelling story and the author’s eloquent style, I had written a review in the Iranian, for which he sent me a nice thank you note.

Khaled Hosseini’s new book, A Thousand Splendid Suns, is about the lives of two women in Afghanistan, the injustices imposed on them, and it gives the reader a glimpse of the hardships the women of Afghanistan have endured. It is the story of friendship between Maryam and Laila and their unfortunate fate.

Although the story begins rather slow, and regardless of the initial distraction caused by too many characters, it picks up speed along the way. I marveled at the compelling drama, but maybe not in the same way as his first novel. All along, I had a feeling that he wrote the first book for himself, while this one was written for the larger audience, and understandably so.

It didn’t take me long to realize that in order to enjoy this book, I had to disassociate it from The Kite Runner and stop comparing the two. It was only then that I truly began to submerge into the story and take pleasure in reading it.

Last night, I sat in the Bishop School’s gymnasium among nearly 800 others to listen to the now famous author. How different this event was from the cozy gathering of two years ago. Having heard rumors about the influence of fame and fortune, I sat there with somewhat lowered expectations. After all, I thought, he wouldn’t be the first. However, much to my surprise, the evening proved to be a complete delight and worth every minute of my time!

After an elaborate introduction, Khaled Hosseini went to the podium and began his talk with a shy smile and a lighthearted remark, and managed to keep a low-key approach throughout. He spoke of the misfortunes concerning the women in his country, and the mere fact that a man could care so deeply about women’s destiny was enough to capture the audience.

At the question and answer session, someone asked him about his favorite authors and the books he most enjoyed to read. Khaled Hosseini named a couple of American authors and their short stories, but then spoke of his favorite Persian books of poetry. How proud it made me to hear him mention Ferdowsi’s Shahnameh, and the poetry of Hafez and Rumi!

While many Iranians may not realize that other Persian-speaking nations also read these books, most Americans don’t even know they exist. That single remark told me that Khaled Hosseini has remained true to himself, that deep down, and despite this overnight fame, he is the same sensitive man who wrote The Kite Runner.

The fact that his novel was published in forty countries has not prompted him to say things simply to please his audience. Surely most people would have connected more easily with a famous Western literary names and books that are more familiar to them. Yet he chose to once again go with his heart and by doing so, he certainly touched mine.

When a line formed to receive his autograph, I was tempted to go forward and ask if he remembered our brief encounter, even have him write a personal note in my copy. But not wanting to hold the line, I moved away. No doubt he must meet far too many people to recall every single one. As for me, his autograph should be enough to remember this most enjoyable evening. Comment

About
Zohreh Khazai Ghahremani gave up dentistry to be a full-time writer. She lives in San Diego, California. Her latest book is “Sharik-e Gham” (see excerpt). Visit her site ZoesWordGarden.com