The resurgence of tolerance 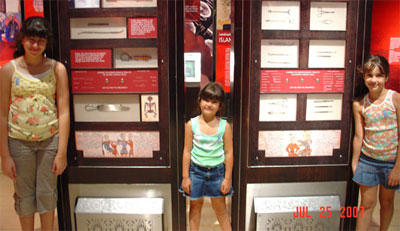 It’s been almost 7 years since the destruction of the World Trade Center towers by a group of people who called themselves Moslems. Ever since, the relentless right wing radio talk shows and other ultra conservative media outlets have taken this disgraceful act of terrorism and exploited it to attack Islam, the Islamic culture and Moslems in general. Although inherently racially motivated, the cursory claim is that the Islamic world has not contributed anything beneficial to mankind and has only contributed to repression, war and terror >>> Photos

The Islamic world (i.e. the Middle East) is chastised and dehumanized in countless books and movies that masterfully weave lies into the honest fabric of history. One trip to the neighborhood bookstore and you’ll see books with catchy titles like: Persian Fire: The First World Empire, Battle for the West or The Battle of Salamis: The Naval Encounter that Saved Greece — and Western Civilization. The terror attacks of 911, thus provided a card blanche to these elements to insult Islam and Muslims in every possible way.

What is refreshing is that less than a mile away from the WTC site there is an exhibition at the Liberty Sciences Center (part of the Liberty State Park that contains the Statue of Liberty) entitled “Islamic Science Re-Discovered“. It is beautifully assembled and shows the contributions of the Islamic world to sciences and technology. The great historian George Sarton in his Tribute to Muslim Scientists in the Introduction to the History of Science, says:

“It will suffice here to evoke a few glorious names without contemporary equivalents in the West: Jabir ibn Haiyan, al-Kindi, al-Khwarizmi, al-Fargani, al-Razi, Thabit ibn Qurra, al-Battani, Hunain ibn Ishaq, al-Farabi, Ibrahim ibn Sinan, al-Masudi, al-Tabari, Abul Wafa, ‘Ali ibn Abbas, Abul Qasim, Ibn al-Jazzar, al-Biruni, Ibn Sina, Ibn Yunus, al-Kashi, Ibn al-Haitham, ‘Ali Ibn ‘Isa al-Ghazali, al-zarqab, Omar Khayyam. A magnificent array of names which it would not be difficult to extend. If anyone tells you that the Middle Ages were scientifically sterile, just quote these men to him, all of whom flourished within a short period, 750 to 1100 A.D.”

Indeed it was the scientific developments in the Islamic world that propelled Europe out of the middle ages and initiated the renaissance. To me the most significant message of this exhibit is to show the resilience and the resurgence of a very unique and priceless American value: tolerance. It is difficult to imagine that such an exhibit would take place in any other country at a stone’s throw away from the WTC wreckage site.

Here is a collection of pictures that I took at the exhibit during my visit with my daughter and nieces.