The speech that Ahmadinejad should give 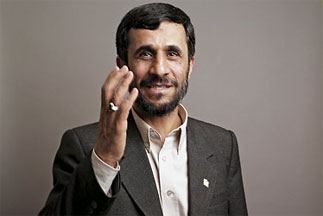 Thank you ladies and gentleman of the press for accepting our invitation to attend this news conference.

For your information we invited many news organizations to this news conference but as you will note quite a few chose not to attend. We consider this another piece of evidence of how the corporate media plays into the hands of the warmongers as they did prior to the attack on Iraq. Fox News is repeating the same distortions but this time it is targeting Iran instead of Iraq.

We believe journalists should remove themselves from the process of generating propaganda for the military industrial complex and not allow their hands to become bloody. One Judith Millar is plenty enough.

Today we are announcing the suspension of our enrichment activities for a period of six months.

We have decided to do this because it has become clear to us that the warmongers in Washington have gained the upper hand and are plotting to start a war with Iran.

We suspect those behind this plot are Zionist moles imbedded in the power structure of Washington and are manipulating the Americans into taking actions that will benefit the expansionist and racist policies of the Zionist regime holding power in Israel.

The lies that have repeatedly been spread about Iran playing a part in attacking American forces in Iraq are part of this plot.

The billions of taxpayer dollars that have been spent in Iraq are always labeled as a cost. But exactly where is this money going if not into the pockets of the American military industrial complex? Has their greed reached a point that it does not matter to them if the Persian Gulf is turned into an inferno and the price of oil reaches two hundred dollars per barrel?

These two very powerful forces in Washington, the military industrial complex and Zionist agents, have been trying everything in their power to start a war with our country. It is time the American people woke up to this reality. It is time that the American people exercised their democratic and legal rights because if they fail America will be hoodwinked into starting World War Three.

America has started two wars on our borders. It is trying to trick the Iraqi people into signing away their right to their own oil, the same tricks that the British and Americans played on us before the Revolution. Now that it is obvious to everybody that America’s crusade has failed it is scaring its clients into buying billions of dollars of weapons, most of which will simply rust away in the desert.

We Iranians have seen these games played before and twenty nine years ago chose not to participate in enriching the American military industrial complex. Ever since then the oil companies and weapon makers in America have been trying to find a way to “solve the Iranian problem”. Now they have teamed up with the Zionists, thinking that once again they can sell the American people another “cakewalk”. Like a bad Hollywood film it is possible to see the hands of the hacks peddling this rubbish.

It is the duty of the American people to take back control of their government so that once again they can call themselves a government of the people, for the people, by the people. A government of warmongers, for the industrial military complex, manipulated by Zionist has already proven to be a disaster.

We are placing our trust in the people of America and it is for the American people that we are suspending our enrichment activities, not because of the threats from the warmongers. Iran can defend itself, and will defend itself.

The brave Iraqi people have demonstrated to the world that crusaders can be defeated. If the crusaders want further proof that they will be defeated again then all it will take is for them to attack Iran.

Iran has not invaded or attacked any other country for hundreds of years. America’s bloody history is common knowledge.

We are willing to participate in talks that are open, fair, and based on justice and that do not trample on the rights of the Iranian people. As it is clear to everybody it is time for the American military forces to leave the Middle East and Iran is willing to assist towards making America’s withdrawal less bloody then it could be.

The Bush Administration made a big mistake in invading Iraq and we believe the American people deserve the chance to correct this mistake. Compensation for the damages that America has caused will play an important part in restoring America’s lost credibility and respect.

A peaceful Middle East with an enforceable agreement to keep the region free of all weapons of mass destruction is our objective and we trust that the people of all nations will play a part in making this a reality sooner rather than later.

Thank you for attending this news conference and we hope you will do your part in spreading this message far and wide and not allow the warmongering news organizations to manipulate this message towards their own ends.