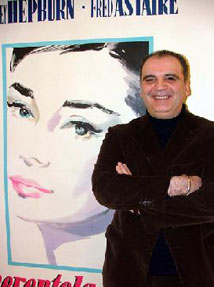 Beauty is in the eye of the beholder.
– 3rd century BC Greek Proverb

The Real Voyage of Discovery consists not in seeking new landscapes but in having new eyes.
– Marcel Proust ( French Novelist 1871-1922 )

Some films like good wine age well. A century old industry that was at best considered as a minor form of social entertainment has lasted the test of time and is now ranked as an Art Form by itself. Certainly a Collective Art Form in that it is not reduced to one person but is indebted to the collective effort of talents that try to render the film director’s vision. Undoubtly the film poster is the Cherry on the Cake that every film director, actor or film crew looks up to. It represents the ultimate accomplishment of a collaboration that awaits critical or public approval.

I have often wondered what happened to all the good old vintage posters of some of those great classic Iranian films some of which may have been lost for ever. Have any ever survived in some basement or backyard of a former cinema manager or movie buff ? These items are certainly part of our social history and deserve to be collected, gathered and displayed in a film museum or gallery as is the case for much of the film art and memorabilia that are conserved in Europe and the US. Since my student years I have been interested in Art books on films. They have become a very popular form of publication in the last 20 years. They have also become much more affordable than they were in the beginning.

As a film buff, I love to display them in my library not just by fetishist obsession but mostly as a film historian for historical and Artistic reference. Its always a pleasure to look through some of the stills of black and white or color photos from the golden Hollywood years or look for feedback on French classic and New Wave Cinema, Italian Neo-Realism or German Expressionist films. It is a literature which is enhanced by visual history and teaches us a great deal on all aspects of a profession that continues to dig in on its own past in order to perpetuate its own Legend.
It was a happy coincidence that made me notice a recurrent name in such publications. I was doing some personal research on how Hollywood film fashion and the American Way of Life had influenced Persian Society particularly in the 50’s and 60’s. It was for an article on American Soprano by Darius KADIVAR