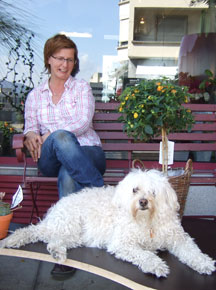 Each day, as I made my way to dance school, I’d pass by Nicole’s shop and stop to take in a breath of the splendid aroma of fresh flowers. I don’t know why I was so drawn to her shop, but I suppose in everyone’s life, there is a special kiosk, bodega or shop that just makes us feel like home.

Nicole busily arranged her delicate daffodils, sunflowers, marigolds, and black-eyed Susans, inside her cozy little shop on Geneva’s Rue des Delices (Delicious). I walked in one Friday afternoon after stopping by earlier in the week to ask her for an interview. The small oasis was busy, with three Swiss women in their forties ordering on the spot bouquets for some woman in her early twenties who’d recently got engaged. They seemed resentful. Nicole suggested white roses.

I motioned to her from the doorway that I’d park myself outside her shop on her little organic wood bench where her dog Mica was stretched out in the remnants of the early evening sunshine. After a few minutes, and having pleased the three grumpy ladies, Nicole emerged to share a place next to me on her bench. Mica yawned as we began the interview.

“What is so special about your flowers?” I ask.

“Je besoin (I need) le nature,” she replied eagerly. When I was a small child, I used to visit the Jura (mountains) and I took in the colors of the flowers. They gave me a kind of therapeutic feeling. I tried to bring this organic calmness to this village we call Geneva.”

Nicole enlightened me with stories of her youth, free in the mountains, surrounded by a bounty of soft flowers. She explained how privileged she was to be able to spend every day these past six years seeing, touching and breathing flowers. A stalky woman with a hard walk, her delicate elegance in sorting the assorted bouquets from pamplemousse (grapefruit) odored gems to the imaginative latanas, assured me these gifts from nature were responsible for her amazing quality of life.

The next day, and I get up early to stretch and prepare myself for dance class after a four-month hiatus. Five months prior, I’d just started off my year on a happy note having attended a New Year’s 007 James Bond party. My partner kissed me sharp on the mouth as the clock stuck twelve and I finally felt like Cinderella who had found her own lost glass slipper.

But the move to Geneva was for work and I simply had to break away. I promised myself that ballet would continue in my life. As I put on my stretch jumpers and ballet shoes, I was reminded of the last time I’d had them on.

“A deux trios, A deux trios, “Isabella, the forceful ballet instructor shouted as we demi-pointed our toes off from the ballet bar.

I was out of shape and wondered if my thirties had permanently damaged my middle so that regardless of whether I tucked my belly in and kept my spine straight, that fearless gut stationed around me like a fat serpent ready to pull me down my its massive force. I kept my head up with the condescending air of regality that I have mastered throughout the course of my life due to serious letdowns by lovers, family and friends. I managed to look half aware of what I was doing.

“Vous prend ici cours deja?” (Have you ever taken this course before) Isabella stopped to ask me.

“Qui,” I responded quickly with a smile and continued to uplift my growingly chubby forearms high above my head.

I stared straight ahead and noticed the girl in front of me, in fact, the girls in the entire class were all slimmer than I by a long shot. There was nothing I could do. At least I got my fat ass in there I thought.

We were next summoned by Isabella to form groups of two and glisse (glide) across the floor. Maybe it was the thought that I was finished up in my thirties. That dance was no longer to be a part of my life. That I’d someone become this tight lipped Geneva conservative workhorse. But as I prepared for my fourth glide, I slipped on my left leg like I was going to do the splits, and at the same time my knee was bent, so I basically twisted my knee around tearing the ligament from its anterior cavity.

The class abruptly stopped. I fell to the floor holding my knee and as I looked up through my pain, Isabella looked down at me shaking her head.

I hobbled home, passing by Nicole’s shop, the grim pain in my knee. But the visual of the bench outside the shop, the moonlight on the linked chains where the shop had been closed up for the night, shadows of the flowers hidden away cozy inside, drew a smile to my face. There were still nice things out there that weren’t damaged like I was at that moment.

At the doctor’s the next day the result from the x ray came back as I had predicted.

So from there my dance life ended. No more leaps, springs or soars. I never realized just how much one needs one’s knees. The rubber bands of the body. If there elasticity breaks, so does one’s soul I was soon to find out.

The next few weeks were grueling. I hobbled to work in the snow on crutches, stumbled into the bath and bed, and basically felt the tire of fat grow on my body. I watched enviously as women in heels (which I was now deprived of completely considering I’d worn them since the age of nine), walked quickly across streets, their bums shaking elegantly back and forth in tight fitted suit skirts.

After four months, my physiotherapist decided it was time to quietly head back to dance class, perhaps prending a light course of assouplissement. And so I braved the walk back to Dance Arena DA is owned and operated by Louise-Christine. An evil eyed, ex-dancer who founded riches in a tight lipped Swiss banker named Benoit. Being as anal as I am, I rang over to the school a few days prior to discuss my situation and that I had glissed on their dance floor etc etc. (If we were in the states I could have opted to sue) and I would need to jumpstart classes again. I also explained that I had a medical note so I would need to get reimbursed for the courses I didn’t get a chance to take but paid for back in January.

Benoit gently advised me to come in and that everything would be taken care of. So I went in once again through the glass front doors. As I climbed the steps, a sinking feeling came over me. It was a feeling I had always experienced when I entered the dance school, but it was something I chose to ignore. I felt stupid for thinking it, Somehow, all of these thoughts that I was some new age California chick kept repeating in my head. I felt like the school had a bad vibe. Maybe it’s the ridiculous nature of the school-so pretentiously Swiss and stiff. Everyone enrolled had to be earning at least 50,000 or their parents were paying.

That was another deeply annoying thing about the school. Each class forced thirty somethings in with thirteen year old girls who’d gather insecurely at the end of the room. Overtly irrational sixteen year olds with their youthful limbs would congregate in the front shaking their young tight asses. Others in the late twenties and early thirties crowd stared viciously at their round hard bottoms, wanting to kick them so hard out the room and right into Lac Leman.

So I walked up to the front counter where the carrot looking red faced Lucie sat. She was your average Swiss hipster. Bright red hair, stuckàup, refused to speak English, and had an air about her which made me want to fucking glisse right back to New York.

I said hello to Lucie in English. She immediately looked up at me with a suspicious glance. The “Bon jour” came avec accent Americain, which obviously she had taken issue with.

Louise-Christine came protectively out of her office. I spoke in French, knowing this would only lead me to further problems in the minutes to come.

Obviously not, this led to enormously forced and malicious laughter from Lucie and Louise-Christine which promoted me to thank them for being so gracious and understanding. I mean, what was the deal with these people anyway. Were they so used to living such perfectly wannabee French lives that they couldn’t cut me some slack? I decided to speak in the most clear English I knew how.

“I need a reimbursement, ” I said demandingly.

She looked at me wondrously. Apparently she didn’t understand even the word look.

“She doesn’t speak a word, trust me” I flashed back.

To myself I said:

I need to speak with Benoit. (you bitches). And if you have a problem with me speaking English then it settles my feeling about why this school and its students have always struck me as the most narrow minded and sheltered brats in all the world. Talk about a bunch of boring robots.

Benoit came out with a dark black suit. I told him about Lucie being rude and she muttered something like “Stupid Americans” but I tried to ignore her. Apparently, even though I am Iranian, speaking English is a problem for provincial Europeans in that it symbolizes lovely characters we have lately brewed that are also considered brats like Paris Hilton or Lindsey Lohan or other such notables who take great pride in showing other twenty somethings across the globe, like Lucie for instance, that we have a lot of morals and values. She obviously thought as an American, I get what I want when I want, but didn’t bother to look to her third albino eye to realize that I had a serious injury that happened at that bloody dance school.

I walked out and never looked back. Tore up the paper Lucie had handed me to come in for five classes when he told me on the phone I would be reimbursed for ten.

A warning to all expats wishing to take dance classes in Geneva: avoid Dance Arena at all cost. Louise-Christine is the witch of the cauldron and Lucie, one scary albino.

On Sunday, I was back on Nicole’s bench. Smelling her delicious aroma of fresh mulberries, mellow yellows, freyas and newly hatched jasmine plants, I wondered why I ever wandered out of nature’s oasis in the first place. I waited out my injury on that bench until one day, my knee was just healed.

I eventually started up dance again. I am back in a New York studio with a New York instructor who speaks New York anglais. I can’t tell you how refreshing it all is. I do miss Nicole’s shop. Her sense of pride in her flowers and the magic she feels daily from basic nature, is one I envy still. She made her small shop a paradise. A skill I suppose we could all use in our daily lives.

Must have been the latanas.