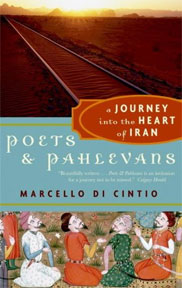 From Poets and Pahlevans: A Journey Into the Heart of Iran by Marcello Di Cintio. The book chroicles the author’s travels throughout Iran in search of traditional wrestling, Persian poetry and the links between the two. It is also a potrait of contemporary Iran through a foreigner’s eyes and is, according to the author, his 300-page love letter to the Iranian people. Di Cintio lives in Calgary, Canada.

From Chapter 5: The Crucible of Good Men

I needed to find a ride back to Kerman. There was one taxi in front of the gate. I walked towards it and girded myself for another battle over the fare. The driver was old and disheveled, his mouth a mumble of pale green teeth.

“Yes.” I was surprised he spoke English. “How much will that cost?” I grit my teeth. He quoted me a price that was suspiciously low, less than what I paid for the five kilometre trip from Shah-e Vali’s shrine. “You will bring me all the way to Kerman for that price?”

“All the way to Kerman? That is very cheap.”

When we reached the outskirts of Mahan my driver turned me and asked “What is the most important thing for my wife and for my children?”

“How can I be sure that my wife and my children will not go hungry?”

“How can I be a good father to my wife and to my children?”

“A good man?” He was making me nervous, and spitting a lot as he spoke. “I’m not sure.”

“Am I a good man because I have money, because of the Quran or because I am clever?”

“I don’t know. I’m not sure if any of those things will make you a good man.”

“Am I a good man because I have a taxi?”

“I don’t think that having a taxi makes you a good man.”

“How can I be sure that nobody will take my taxi away from me?”

“How can every person in the whole world say that I am a good man?”

“How can every person in the world trust me?”

“How can every person in the world like me?”

“I don’t know. I think everyone has these questions. I’m not sure if there is an answer.”

He paused for about a minute. This gave me a chance to wipe the spittle from my face. Then he asked “How can I become the president of Canada?”

“You want to be president of Canada?”

“Well, you have to be Canadian, first of all. Why do you want to be the president of Canada?”

“If I want to be the president of Canada, do I need money? Do I need to be clever? Or do I need to have knowledge?”

“I think you will need all of those things.”

“Which is the most important? Money, knowledge, or to be clever?”

“You mean to be president of Canada, or in general?”

“How many kinds of ëgood’ are there?”

“Is there one kind of ëgood’ or many kinds?”

“I suppose there are many.”

“How many kinds of ëclever’ are there?”

“How many kinds of ërich’ are there?”

“How can I be sure that I will not go to prison?”

This interrogation continued the entire ride to Kerman. My driver proceeded at a crawl, as if the taxi itself was mired in the muck of his inquiries. Twice, when the question at hand was particularly weighty, he stopped the car altogether. I first thought his endless rhetorical questions were an elaborate preface to something else. I thought he might try to convert me to Islam, or ask for money to keep his wife and children from going hungry. Travelers learn quickly to distrust the motives of taxi drivers. But my driver never asked for anything and, as it turned out, his questions were not rhetorical at all. This philosopher hoped for answers.

It was dark by the time we reached Kerman. I paid the driver the paltry fare and shook his hand. He held tight and smiled his green grin. He asked me if I thought he was a good man, and didn’t let go of my hand until I said that he was.

Chapter 15: Into the West

I left the wrestlers and walked to the Falak-ol-Aflak, the clatter-named fortress that stands over Khorramabad. The castle was built in the twelfth century and now houses a small museum and teahouse. It is most famous for its collection of Lorestan bronzes, ancient housewares dating back to 1000 B.C.E. that were unearthed in the nearby hills.

I briefly toured the museum and settled in the teahouse for an apple qalyun and pot of cinnamon tea. A man approached me as I was writing in my notebook.

“Excuse me. Are you a foreigner?” the man asked me in Farsi.

I looked around to see of anyone else was listening before nodding my head. My Farsi had improved enough that I paid the Iranian price for my ticket. I didn’t want to blow my cover.

“Where are you from?”

“Very good. Please, may I take your picture?”

I smiled at his camera lens, flattered that I was a tourist attraction. Then the man handed me a sheet of paper. “Please, can you write something for me in English?”

I took the paper and wrote: ëHello. My name is Marcello Di Cintio. I am from Canada. I like Iran very much. Iranians are very kind.’ I handed him the paper and translated it for him.

“Thank you very much,” he said placing his hand on his heart. Then he went back to his table, wrote me a message in Farsi, and handed it to me as he left the teahouse. It said:

The mother of flowers of different colours.

I wish you knew that one day a horserider will pass through this garden.

His footfalls are frightful,

And his name is Autumn.

At the bottom of the page, the man added “My name is Ahmed. I am pleased to meet you, kind gentleman. I wish you health and safe travels. I am happy that I now have a friend in Canada”

A few minutes later another man approached my table. He greeted me in English. “Excuse me, may I sit with you. I am working at this museum. You are a tourist, yes?” I nodded, ready to hand over the extra tomans for my admission fee, but he didn’t ask about my ticket. “I am in charge of restoration,” he said. “Would you like to see the laboratory?”

I followed him out of the teahouse and into room filled with microscopes and long lab benches. “We restore many of the artifacts here,” he said. He walked over to a large floor safe in the corner of the room. “Now I will show you something very wonderful.” He spun the combination lock until the door clunked open. Then he removed a locked box from the safe and opened it with a key on his belt. He lifted a decorated metal bowl from the box, blew off the dust and handed it to me. “This is Lorestan bronze,” he said. “It is three thousand years old.”

Ancient artifacts never interested me much; a half hour earlier I gave the bronzes on display in the museum little more than a momentary glance. But holding the bowl in my hands made my pulse jump. I had never held three millennia in my fingertips before. The man removed more objects from the box — another bowl, an axe head, the hilt of a dagger — each thousands of years old. A millennium before Christ a man might have split branches into kindling with the axe. A woman may have filled the bowl with grapes and quince. These everyday objects had passed from those ancient hands to mine. Our fingers beheld the same metal coolness. For a moment I knew what eternity felt like.

“Will you display these things at the museum?” I asked.

“To Tehran?” I’d seen similar bronzes at the National Museum.

“Not Tehran. To Paris. To the Louvre. The Iranian government is not interested in these things anymore because they are from before Islam.” He twirled his finger over his head. These bronzes would suffer the same fate as Zur-o Safoneh and the other forgotten traditional wrestling styles. They were regarded as artifacts from a bankrupt age and devalued by a regime that decided being Muslim was far more important that being Persian. I could not understand why it was impossible to be both.

“Poets and Pahlevans” can be purchased here.

PrevPreviousGuilty of sex while being raped !
NextThis Week in Pakistan: The General and the JudgeNext