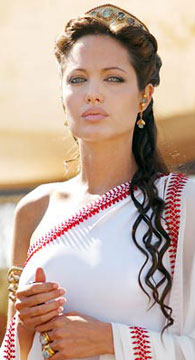 One of the things we as Iranians have in common with the West (surprised?) is the appreciation and an almost religious worship of extreme beauty. So strong is this in Iranians, that many of us can feel outright physical pain when we are confronted with “heavy duty beauty”. To Iranians, the attainment of beauty is looked at as a birthright that even God (or Allah) cannot take away. Historically the pursuit of beauty has been well documented. In books and literature, art and architecture, and even as we have seen recently, Tehran has become the plastic surgery capital of the world, as big nosed beauties, do anything to mend the seemingly singular defining (obvious at least) flaw between their flawless doe eyes.

In the West, beauty is equally worshipped in many ways, but mostly in a baser association with wealth, health, goodness and purity, and of course sex. Even the comparatively sexually repressed Americans (compared to Europeans), who still seem somehow connected to those first Puritans who founded America, can’t deny that very extreme beauty has very real power. Stronger even than their many convictions.

Which brings us to Angelina Jolie. One of the few times you will get a man and a woman to agree on anything, is the proposition that Angelina Jolie is possibly the most beautiful woman of all time. I say possibly, because there have been many other beautiful women, and depending on your standards of taste, preference, and particular point in time, you could have a very valid opinion as to who you think is or was even more beautiful than Angelina Jolie.

I realized this concept of extreme beauty and its power, when I saw “Alexander” the Oliver Stone film a few years ago about the (great) Greek conqueror. As an Iranian, I feel it is my duty to see any film that portrays the Persian Empire, first week, during prime time, in the theater, in full 35-mm THX (72-mm or IMAX if available) glory. (Yes, even “The 300”!) In the film Alexander, Angelina Jolie played the role of Olympias the mother of Alexander. One of the problems with the big silver screen is it’s sheer size. In this film, Angelina’s close-ups were literally 30 feet tall! Which amounts to a high dose of close contact beauty reflected into your brain all at once. An overdose actually. I remember coming out of the movie visually shaken, partially because of the price I had paid for a relatively awful film, but there was something more. I had literally been overcome with the maximum amount of beauty I felt I could take. My beauty quotient was reached. I realized that having seen so much beauty in one face, dramatically and at such a large size, I was literally full and couldn’t take anymore. Beauty overload! A bit nauseous too.

Since then, Angelina Jolie has never looked as good. Age lines that would add courage, wisdom and character to anyone else, appear as huge flaws. Pretty much I haven’t seen another Angelina Jolie film since. What would be the point? Anything that one sees at it’s zenith is from then on scrutinized at such a level of high excellence, that being simply average or mediocre is considered a failure. I think this may have also impacted Angelina Jolie’s career somewhat, Brad Pitt issues, adopting orphans, playing the wife of the slain Wall Street Journal journalist, Daniel Pearl in “A Mighty Heart”.

Which brings me to my point. I think there reaches a point at which, having seen so much beauty, of such extreme intensity, that one becomes a bit insane, ill, and possibly even numb to it. Nothing can compare to the best. Having seen the most beautiful, accepting the merely OK, seems disappointing, even depressing, occasionally unacceptable. Just knowing and being able to distinguish beauty, inherently appears to be a curse of sorts. The very high standard of beauty we as Iranians have, is possibly our biggest flaw. Because we know the alternative, we cannot seem to accept anything less than the perfect, the flawless, the singularly undeniably most beautiful in everything we see, want, dream, and on very very rare occasions, do.

Which may very well be part of the explanation as to why we “do” relatively little. After all, how could what we “do” ever compare?