How the hyena got its laugh 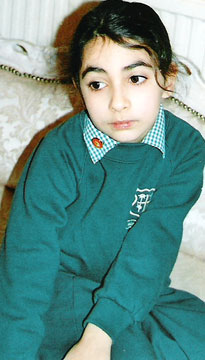 Some of the stories written by my 10-year-old daughter, Jina, have been published in the British magazine for kids, Aquila. — Mehdi Falahati

In the largest and most famous pack of hyenas in South Africa, lived over 90 dull, dangerous aggressive spotted hyenas…OK, maybe they weren’t so famous, and there wasn’t so many of them, but one thing is true though, and that is, that this story is very ancient, and that is exactly why you should hear it now, before it is lost in the mist of time.

Now among them lived a playful and happy baby hyena. Now be prepared for a shock. These hyenas did not have a laugh, they never even imagined having one. But one day, as the pack was relaxing by the river, and the baby hyena was playing along, the strangest creature fluttered past him.

Nugget had never seen anything like it before. It had two wings, it was about 3 cm long and all colourful. Can you guess what it was? Nugget followed the butterfly, forgetting completely about the rest of the pack, around the lake, just where he could see his parents. (So he had not gone far) when he stopped, to his amazement the butterfly landed right on top of his nose. He sniffed and then sneezed. The butterfly ‘s little legs tickled him. He had no way of showing his emotions to himself apart from a strange and awkward noise through his nose. It made the butterfly jump off. So, he followed it back all the way around the other side of the water to his pack. His mother the alfa-female was not even tempted to ask where her son had been. Neither was his father, the alfa male. Mind you, no one saw him, anyway, following that insect around. Nugget went round tapping all the other hyenas for attention. When he got back, he showed them the strange creature he had discovered.

Once more, it landed right on top of Nugget’s nose. Nugget gave the hyena’s first giggle. But this time, unlike when he was on the other side of the lake, the giggle did not stay a giggle. It grew into a chuckle, and then a hesitation, and then a laugh, and what a laugh it was, the loudest any one has ever heard in the world’s history, or even in any ones loudest nightmares.

When Nugget had dried his eyes, and came back from his own laughing planet, he, and all the other hyenas, realised that the butterfly had gone. That however, did not matter the least bit to them. The LAUGH had been discovered.

After a week or two, all hyenas were doing it. It had sort of even become a fashion from then on. Now they are all laughing, so it has finally become a tradition.