Oh no, not another Persian rug shop 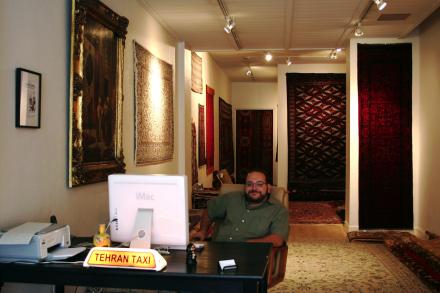 Some years ago, well before I began traveling regularly to Iran, I started to understand the disconnect between the way Iran was portrayed in the American news media and what I suspected the reality would be like.

When I first went to Iran in 2001 it didn’t take long to realize I was right, but it has taken all the years since to understand what was wrong and lacking from so much of that coverage, and still holes remain. Now the coverage always strikes me as simply one-dimensional representations; caricatures of a perceived reality.

Fortunately, for the few in the U.S. who ever make it to Iran, they are greeted by a much more layered and welcoming society than they dreamed imaginable. Sadly, though, that number of people is painfully small.

So in my projects on Iran, first in print and later on video, I’ve tried to give a deeper sense of what the country really is: a place like any other, with contradictory messages, many personalities, its own quirks and countless unanswerable questions. Of course it’s all very much amplified when talking about a land that has been at once shrouded in decades of mystery for lack of access, but also very well represented by our immigrant community here in the U.S.

As has been recounted all too much, we are doctors, lawyers, engineers, artists and even elected officials. We are considered to be one of the, if not the, most successful groups in the U.S.

There is one more thing that we are, however, that none of us ever wants to discuss: Rug dealers.

Stereotypes are a funny thing. Too often they’re based in those same one-dimensional negative experiences of the perceiver, probably housed in a section of the brain that’s hard to control. And regrettably these experiences often feel very real.

The Persian Rug Dealer has become a pillar of American stereotypes. They’re cheaters, shysters, they practice shady practices, they just won’t go out of business even though they promised to years ago, they are nothing more than used car salesmen, no one can be trusted less. Not even self-congratulatory nor the staunchest Iranian apologist will stand by their rug selling brethren.

As the son of a rug man, I’ve seen this typecasting played out thousands of times, in hundreds of different ways, watching the line between innocuous stereotyping and racism crossed almost daily.

At first it hurt a little, but then I realized that this stigma was so ingrained into people’s thinking about rug men that it wasn’t even worth combating. Most of the rug men I knew had decided that it came with the territory and the only defense seemed to be even more over the top in their chicanery.

Over the past couple of years, however, I’ve witnessed an interesting trend; rug shops have become one of the few places where average Americans feel good about asking their Iran questions.

I think the logic goes something like this: “I don’t want to offend my neighbor or dental hygienist with a potentially hurtful question, so I’ll ask the heartless rug guy.”

As one of the few groups of people who actually do business with Iran, rug dealers are of course a natural source of information on Iran. They’re opinions are as biased as anyone’s to be sure, but their attitudes are also more well rounded than the Iranian who hasn’t returned in thirty years or the one who goes back for two weeks every summer. Anyone importing regularly from Iran has a complex understanding of that country’s economy, business practices, public sentiment and every other social barometer imaginable.

Thus far though, it’s been mostly a missed opportunity. For most rug men their Iranian-ness has come to represent one more barrier to a sale and therefore something better left out of the conversation with their clientele.

My feeling though, is that we can’t hide from who we are. Real success comes when we’re able to embrace ourselves, warts and all. I’m Iranian, not Spanish, and I’m the son of a rug man, nothing more nothing less.

This is why my current project is the scariest, but potentially most gratifying yet. I never thought I’d become a third generation rug man, but here I am.

I’ve just opened a rug gallery in San Francisco called Rug Jones that doubles as a place to talk about Iran. The other rug men in town caution me that “there’s no money in that,” but I’m not so sure. I find the more connection I can offer to my fatherland the more average Americans become engaged in this most important dialogue.

I’m currently on the look our for representative artists, writers, speakers and others who’ve done work on Iran and would like to share it with a broader community. My place belongs to you.