Biting clerics who feed you 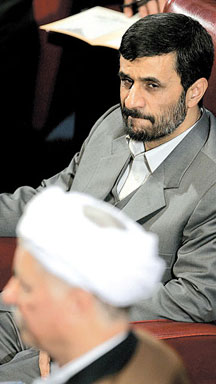 In late May, an official close to Iranian president Mahmoud Ahmadinejad publicly accused more than forty high-ranking government officials — including some of the country’s most powerful clerics — of economic corruption. These unprecedented revelations may signal the start of a significant power struggle inside the Iranian government, one likely to intensify between now and the May 2009 presidential election.

Upsetting the Clerics
This is not the first time Ahmadinejad has upset Iran’s clerical establishment. Since taking office, he has acted as if he is on a religious mission, sending letters to the U.S. and Russian presidents as well as the pope, inviting them to discuss Islam and spiritual values. These letters imply that Ahmadinejad thinks of himself as a religious leader, not just a head of government. He also permitted women to attend public soccer matches, ignoring the harsh clerical reaction until Supreme Leader Ali Khamenei ordered him to change his policy.

Ahmadinejad has outraged Iran’s clerics more directly by claiming that the Hidden Imam (the Shiite messiah) guides him in running the country. Such a suggestion undermines the cleric’s fatwas and their role in government. In addition, if one believes that this messiah is behind all government actions, then Ahmadinejad does not have to take responsibility for the regime’s failures and faults. This view of the Hidden Imam’s role has been criticized by many leading hardline clerics, such as the head of the Society of Militant Clerics of Tehran, Ayatollah Muhammad Reza Mahdavi Kani, and the former secretary of the Supreme Council of National Security, Hassan Rowhani (also the former top nuclear negotiator). In a June 4 speech, Rowhani attacked the president’s demagogical policies: “[W]e should not believe that since the country is the Hidden Imam’s country, we can disclaim responsibility. . . . We have to run the country with effort and thought.”

Palizdar’s Revelations
In late May, in speeches at Hamdan and Shiraz Universities, Abbas Palizdar — an expert working with the parliament’s “Center for Research” — spelled out charges of economic corruption against high-level officials of the Islamic Republic. Palizdar had access to the judicial dossiers of corrupt individuals. His specific charges were posted on YouTube and Iranian websites, evidently filmed by audience members. In one speech, for example, he described how Ayatollah Muhammad Yazdi, former head of the judiciary, purchased a tire factory at a considerable discount (Palizdar stated that it was worth $60 million, while Yazdi paid only $10 million on long-term credit). After the apparent deal, the factory’s shares were sold on the Tehran stock market. Palizdar also accused the judiciary of being unwilling to fight corruption. In response, the court that oversees government employees arrested Palzidar on June 11.

Although Majlis officials and those close to Ahmadinejad have publicly denied Palizdar’s connections to the government, many observers have concluded that the president is behind his allegations. Palizdar was an unsuccessful candidate on the “People’s Committee of Ahmadinejad’s Supporters” list in the 2006 municipal elections, and the student organizations that hosted his speaking engagements are close to the president. Moreover, none of those accused by Palizdar are supporters of the president.

The widespread speculation that Palizdar’s speeches were part of an effort by Ahmadinejad to counter critics of his domestic — especially economic — and foreign policies seems to have merit. From this viewpoint, the president’s current political goal is to position himself for reelection in May 2009. Since his economic program is exacerbating the problems (e.g., raging inflation) that are the source of so much popular discontent, he may be looking for a way to change the public discourse. Accordingly, he has drawn public attention away from the economic situation by emphasizing financial corruption, blaming “hidden hands” and “mafias” that prevent him from succeeding. He may also be trying to regain lost political ground by showing that he is doing something tangible to fulfill his campaign promise to fight corruption. On June 10, Ahmadinejad posted a long article on his blog attacking the clerics who criticized him for his political demagoguery and religious pretensions, stating that the judicial system supposed to fight corruption denies that corruption even exists in the country.

But this approach could carry a high cost because Ahmadinejad lacks a social base to challenge the clerics. Since most Iranians who voted for Ahmadinejad were motivated in no small part by conservative religious views, his apparent strategy of accusing respected clerics — whom the people trust more than the president — of corruption is a risky gamble to regain popularity. Although the clerics have lost a significant amount of popularity since the revolution, they have gained significant political power, and the regime’s legitimacy is based on religious credentials. Moreover, ultimate power still resides with the head of the clerical establishment, Ayatollah Khamenei.

Ahmadinejad’s Achilles Heel
Regardless of the outcome of the Palizdar story, the president faces a steep political test given the increasing criticism of his economic program. Ahmadinejad promised to bring the country’s oil revenue to the people, yet his administration has been unable to provide them with traditionally cheap gasoline and natural gas. Gasoline is now rationed, and in the middle of January’s cold spell, 1.4 million people reportedly went without gas heat, according to then Interior Minister Mustafa Pur-Muhammadi (other estimates are even higher). Ahmadinejad has insisted that increasing the money supply by 40 percent each year and lowering interest rates to 10 percent has nothing to do with growing inflation, which his government admits was 25 percent in January (most other estimates are higher). Inflation has hit hardest on two crucial middle-class items: food and housing. Meanwhile, the social gap is growing into a widening chasm.

On April 6, Sayfollah Jashnsaz, director of an Iranian oil company, stated that Iran exported $70 billion worth of oil in 2007-2008, up from the $65 billion exported during the four years of reformist president Muhammad Khatami’s first term. He estimated that in 2008-2009, oil revenue would reach more than $80 billion. Although this unprecedented income should be the basis for extraordinary prosperity, ordinary Iranian citizens do not see such change in their daily lives. Instead, they see media accusations that Ahmadinejad’s government has failed to deposit $35 million in oil revenue into the central bank. Despite the government’s denial of this claim, the charge reflects the lack of transparency that characterizes much of Iran’s economic data.


Conclusion
Drawing attention from the government’s failures by making inflammatory statements against his enemies may be Ahmadinejad’s strategy for regaining his lost popularity before the next presidential election. But the key question is to what extent the Supreme Leader will support him — in the end, power in Iran does not come from elections but from the Supreme Leader and the revolutionary institutions he controls. In his June 10 speech to the new Majlis, Khamenei focused on the notion that his authority stems from God, and that everyone must obey his orders. That would include Ahmadinejad.

Mehdi Khalaji is a visiting fellow at The Washington Institute, focusing on the role of politics in contemporary Shiite clericalism in Iran and Iraq. First published in PolicyWatch.