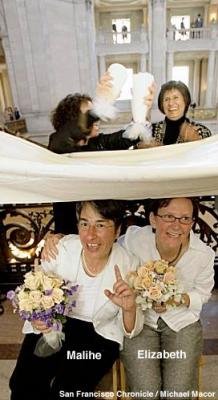 On June 17, 2008, after years of being in a committed relationship, I was finally able to marry my partner at San Francisco’s City Hall.  We wanted to honor my Persian heritage so after we said our vows we participated in the traditional Persian ritual where friends and family grind sugar cones over our heads to share with us their sweet wishes.

The custom that I had seen in other Persian weddings growing up in Iran.  It was a joy to experience that sweetness for my own marriage and be newlyweds after a 12 years of living together! My spouse said jokingly, “I wonder how many other couples would want get married after 12 years”?

We were allowed this happy day because the California Supreme Court finally ruled on May 15, 2008, that same-sex couples had the same rights as opposite-sex couples.

Filled with joy and anticipation over this legal breakthrough, we wanted to be married as soon as possible.  So as soon as the Supreme Court decision was issued, we went to City Hall to schedule our date so we could be among the first to marry in San Francisco.

On June 16, 2008, at 5:01 the lesbian couple Del Martin and Phyllis Lyon, life partners for 55 years, were actually the first to be married at San Francisco City Hall. [Photos]

To take advantage of being married as soon as possible, we decided to forgo a large traditional marriage in favor of spontaneity and creativity.  We had only eleven days to make the plans. The last time gays had a chance to marry in 2004, we were so rushed in getting to City Hall that I bought roses and baby’s breath from a street stand.

The first steps in granting same-sex couples the chance to marry arrived in February 2004. San Francisco  Mayor Newsom under his own authority directed the County Clerk to issue wedding licenses to same-sex couples.  As soon as we heard, we raced to city hall.  We feared that the court would issue a TRO, prohibiting the city clerk from giving marriage licenses to gay couples.

My partner who works in the city made it to San Francisco City Hall first.  I got myself to San Francisco in on hour from Oakland in order to get married.  We were legally married for several months until a court challenge led to a California Supreme Court decison to nullify over 4,000 marriages including ours.  They ruled that a mayor of a city cannot simply rewrite state law as he chooses.  We understood the rationale but felt crushed to have our marriage erased through a court order.

Not only had we experienced the joys of marriage for several months before these marriages were nullified, we had also had several celebrations, including a Persian wedding with friends.  Also my partner’s mother had announced our 2004 marriage in the Washington Post and held a large reception for us in Washington, DC.

This year we had enough time to evite our friends and families to witness our marriage. We assured them that we understood the short notice would mean that some of our friends and loved ones could only be there in spirit.  Our wedding was schedule for 1:00 p.m at City Hall.  This time instead of the 24 people we expected and who had RSVPed YES to our evite, over 60 people showed up to show their support. Their enthusasm for our marriage brought us great happiness.

In fact, the feelings of joy were electrifying as couples were being married in all corners of City Hall.  The rotunda would shake with the loud cheers after each couple came down the stairs.  I was well composed until one moment during the ceremony.  As we exchanged our vows, I turned to get the ring from my friend to place on my spouse’s finger.  Seeing the number of friends present and how many of them were wiping tears from their cheeks deeply moved me. Then my voice broke, and tears of happiness rolled down my cheeks.

At the same time my feelings were bittersweet, as I thought of the contrast.  Finally in the U.S., I was able to marry the love of my life.  On the other hand, in Iran, my country of birth, I know that gays often risk their lives to find their happiness in a same-sex relationship.  Too often gays are executed because of who they are and for the love they feel!

Our wedding guests at City Hall were as diverse as the city itself.  Our well-wishers came from all walks of life.  Even friends with strong commitment to  the Catholic Church came to support us.  Many friends came who had contributed to organizations such as the National Center for Lesbian Rights, who fought in court to over turn the ban on same-sex marriage.

The media spotlighted our love stories!  The San Francisco Chronicle ran a half page story about us. Spanish channel 14, Univision taped our whole wedding and featured our ceremony on their 6 PM evening news. Since I had lived in Spain and also speak Spanish, they were eager to feature us after they heard me speaking Spanish to a friend from El Salvador.  We were thrilled to be able to share our joy with Hispanic communities.  The reporter was extremely emotional and congratulated us with her teary eyes.

In addition to the joy I experienced in marring the one that I loved, I understand that from a political perspective it is also important to marry now.  If every same-sex couple that wants to get married does get married and invites as many people as they can, the world will soon see why the “love haters” (that is what I call people who are against same-sex marriage) will see the power of love — how love wins and hate looses.  Why would they choose to spend energy in fighting the love of two consenting adults? Instead we hope that will spend time positively to find someone to love, so that they too can know how great it is to be in love.

Some things have changed since 2004.  People are less concerned with who other people go to bed with at night and more concerned with whether they have a job to go to when they get up in the morning. Polling shows much progress has been made.  Still some member of religious and minority communities such as Christians, Muslims, Hispanic and African American still  oppose same sex marriage.

But if we can show how contagious love is, we can gain support from communities that traditionally have opposed same sex marriage.  Californias have big hearts and can fit lots of love in them.  We must win the public opnon before we can win at the ballot box.  Come November we need to block the LIMIT ON MARRIAGE amendment to the California Constitution.  We need to block their efforts to limit our rights as it will begin limiting other people’s rights.  Same sex couples and their supports have to make sure that does not happen.  Once we stay silent when others’ rights are taken away, who will remain to defend our rights?