Two sides of a coin 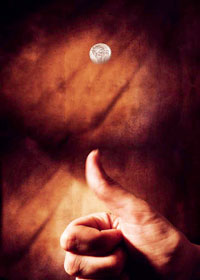 It might seem like the US consul setting up shop in Iran is only going to help those who need visas to avoid having to go to Dubai anymore. But as small overtures always do, they end up becoming far more than they started out to be. This time there seems to be a huge wave of good karma pointed at this latest ray of hope.

On one side you have the legitimizing effect of giving one of the most brutal and murderous empires Persia ever had, regional credibility, and the tough admission that the US policy of isolation for the past 30 years, was wrong.

On the other side, you now have the beginnings of the slow start to the discussion of what you expect Iran to become, namely the moderation of Iran towards the Western notion of what a “civilized country” is. Complete with a calm and mature dialog on what real democracy is.

Both sides of the coin have pros and cons, but there is also precisely the greater risk of pros and cons, or professional con artists on both sides who only want to outwit and out-gamble and outlive the other, regardless of the stakes.

Unfortunately there is no indication that the used car salesmen on both sides, eager to sell their countries long term interests for their own short term gains, are capable of putting aside their greed and ambitions long enough to bring about the kind of idealistic fairy tale relationship of peace that the people of Iran and the US dream of.

Proof? The meetings have been and will continue to be behind closed doors and we the people, will never hear any actual live dialog of the talks openly, and the resulting press conference afterwards will describe the goings on as merely “cordial and productive”.

Just enough to give the people hope, keep them docile, and waiting.

For now though we Iranians and Americans sit and wait and hope that somehow, out of this usual den of suspect vipers, good will finally find a way.