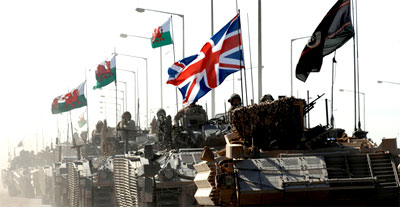 Throughout this past year, the daily political staple of the major U.S. and British governmental organs and their related establishments in the main stream media have been the talks about the drastic security improvements in Iraq and the reduction of violence and in the number of attacks against the British and American troops.  This is said so much that even Democratic presidential candidate Senator Barack Obama has begun repeating it.  To validate and stress this claim, the proponents of the idea give credit for this “success” to the surge in troop levels and the cooperation of the Sunni population in Iraq with the so-called coalition forces and the Maliki government in the “Green Zone” against the Shiite majority.

When British Prime Minister Gordon Brown visited Iraq in mid-July, he went farther by promising a “fundamental change of mission” in the first half of 2009.  Hearing this call, one was led to believe that the two countries that invaded Iraq more than five years ago were beginning to plan to withdraw their troops from that country.  But just like before the hopes of the majority of the peoples of Britain, the U.S. and Iraq were dashed away when they saw on July 22, 2008 Gordon Brown held back from offering a definite timetable for British troop withdrawal and at the end gave a vague impression that the withdrawal might be postponed until 2010.  To make sure that no one misunderstood the British message, the parliament’s defense select committee urged Mr. Brown to keep a core of troops in Iraq for years to come.

More than a year and a half ago, when Tony Blair was still holding onto the office of Prime Minister, the Guardian newspaper on Feb. 21, 2007 reported that all British troops would be withdrawn from Iraq by the end of 2008.  The decision was the result of months of intense debate at Whitehall, brought about by the pressure of the anti-war movement and the on-going fight by the Iraqi people themselves.  Under the plan outlined by Mr. Blair, all British troops except a few army instructors were to be out of the country by the end of 2008.

Soon, however, the White House privately or otherwise began admonishing the British leaders claiming they were only interested in Basra, where British forces were
concentrated.  And now, after being in office for barely one year, the new British Prime Minister Gordon Brown cautions the House of Commons and the British public that no deadlines for troop withdrawals can be established and the status of the British armed forces in Iraq depends entirely on “conditions on the ground”, a phrase borrowed from President George Bush’s playbook.

To remain faithful to the U.S. administration, the British defense secretary Des Browne told the Brookings Institution in Washington that there are no plans to withdraw British troops out of Iraq before George W. Bush hands over the keys to the White House to a new American president at the turn of the year.  Any such decision is expected “in the first half of 2009.”

There is no rush on the part of the conservative classes of the western societies, since the British troops, the staunch allies of the U.S. military juggernaut, have a lot more annihilation to do in Iraq and Afghanistan.  Des Brown and the House of Commons have not specified the deadline and the number of troops to be redeployed from Iraq to Afghanistan, which by the nature of its resistance to foreign invasion and occupation may become a long-term target of the Pentagon and NATO.  According to Gordon Brown the tasks of the 4,100 British troops in Basra in southern Iraq is to train and mentor the 14th division of the Iraqi army.  Just like any other benevolently occupying power, it must prepare the social conditions and educate the Iraqi comprador class how to run an election campaign which would guarantee a result acceptable to the U.S. and British big propertied classes.

Next in line lies the task of building and raising the capacity of the Iraqi navy and marine forces, which is not a small chore, since the invading armies made sure that no Iraqi ships, tankers and their sailors and captains survived the barbaric attacks of the raining missiles.  Assuming all these missions are satisfactorily accomplished, the violent arm of the British aristocracy has to prepare all the conditions to pass control of the Basra Airport, even if it is nominally, to the Iraqi non-existent air force pilots who have long been denied flying even a small helicopter since March of 2003.

But this is not the last step in building a modern state apparatus to run the affairs of a country.  For protecting the platforms and the pipelines that help carry Iraq’s oil and gas to the tankers destined for the industrial centers of the world, a half-heartedly modern state needs a navy and marine force.  To that effect, the British Army, once again, has embraced the “White Man’s Burden” of helping to build Iraq’s naval forces anew.

Whereas every society, no matter how primitive it has been kept, needs organized production of goods and services, exchange of commodities, a system of distribution, a minimum level of accumulation and ultimately consumption, the British establishment has taken upon itself to draw a plan for new political and economic strategies for the country it has helped to invade, destroy and occupy.  To build the state apparatus in their own image and fit for their own use, the British parliament’s defense select committee wants to be sure that in advance of the troops’ departure, all the “preconditions are in place for political progress and economic recovery.”  Truly this must be called a benevolent empire.

In addition to all the work that the Empire still has to do with regard to arming and training the neocolonial regime, at the heart of the British dilemma and hesitancy is the existence of the Iraqi patriotic forces, led by Shiite Cleric Moqtada Al-Sadr, whose Mahdi Army, despite massive bombings and relentless assaults, the British-U.S. occupation armies have not been able to obliterate.

No doubt, all this will take a long time and that gives the U.S. and British all the
reasons not to be forthcoming with their time of departure.  The true objective and strategy of British and U.S. imperialism is to organize and arm a small section of the Iraqi society that can function as an oligarchy by suppressing the aspirations and the efforts of the majority for genuine sovereignty and independence, while at the same time remaining subservient to the interests and domination of the ruling classes in the developed capitalist countries from whom they take their orders.

The alien forces inside Iraq opportunistically look for all and any thing inside or outside of that country that they could use in explaining the reasons for their continued aggression and occupation.  In the parliamentary discussion of the British status of forces in Iraq in mid-July, the infamous defense select committee referred to Iran’s influence in the region as a major factor of concern for the British policy-makers.  Apparently, Washington and London would have been happy if Iran was a weak and isolated power in the region.

The old Empire’s military forces, just like its senior partner, the U.S., are spread throughout the world, as shown in the table below: