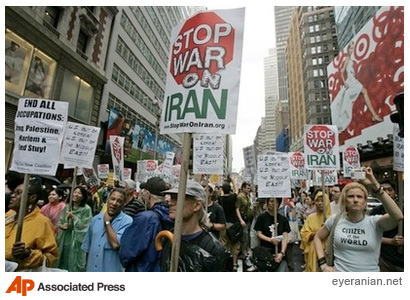 It would be perfectly valid and reasonable for anyone to raise that as a self-proclaimed peace activist, an Iranian in U.S. and someone with enough audacity to consider himself a “progressive”, why I am no longer participating in any anti-war rallies, such as the ones held yesterday. I say no longer as I did for a while, even to the point of helping in organizing a few but have since lost all interest.

My complete explanation would take much more than this forum allows but here is the basic version; there is no such thing as a peace movement in U.S. or more accurately, it is so diminutive and inept, it is often hijacked for promoting a narrow agenda and occasionally even used by the most regressive elements in this country.

To explain further, let’s look at the numbers. The last “anti-war rally” in my hometown of Los Angeles, an area that is the second largest in this nation with a population of over 14 million and certainly one of the largest urban regions in the world, managed to bring out a few thousands on an optimistic estimate.
Less than one percent of this area’s people felt the need to protest being lied to for going into a war. For having billions of their common resources wasted on false promises. For the dignity and reputation of their country being marked to promote viewpoint of a select group. For having hundreds of thousands of world’s population killed by their armed forces, most of them non-combative and unarmed civilians. For thousands of their own young to pay for an unnecessary and illegitimate war with their limbs and lives.

Not even one in a hundred cared enough to take part in protest and that should not surprise many.

Let us all be frank here, many of the so-called “peace activists” in this country are not really against wars, they are against losing wars. For that, had the war in Iraq been going the Cheney-Bush way and we were “winning”, a very large portion of that few thousand wouldn’t even care. Which leaves us with a very small core group, perhaps best described as professional activists. That includes the core believers as well as those within the labor movement and political organization who “organize” for a living.

But is there a solution? I believe there is and that solution starts with education. That’s why I’m here typing away at my keyboard instead of out there with a placard. I need to get my voice out to define WHY war is not the answer and HOW fear mongering is leading us towards more confrontations. That, in my opinion, is where the current activists have failed so far and unless it changes, they can expect an even smaller role to play in any future developments.

If lies have led us to where we are today, truth should set us free. For the peace movement, the truth starts with a look within and admitting it has failed to the point of self-annihilation.

This piece originally appeared on www.eyeranian.net