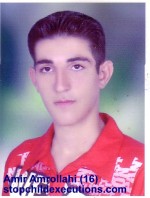 The execution order of AMIR AMROLLAHI (18) who was sentenced to death for the murder of another boy during a fight at the age of 16 was approved by Iran’s head of judiciary Ayatollah Shahrudi. Amir can be executed at anytime.

To read more about Amir’s case and to to help save Amir from execution, please review the prior urgent calls issued at the time of the superior cour approval in January 2008 : http://scenews.blog.com/Amir%20Amrollahi/

Following the letter by Amir’s attorney and reported by SCE Campaign on August 9th, Today European Union nations unanamously communicated their deep concerns about pending execution of Amir. The statement was delivered to Iran Goverment through Embassy of France in Iran.


The European Union is deeply concerned by reports that Mr Amir Amrollahi, sentenced to death for crimes committed

when he was a minor, is shortly to be executed.

This death sentence flagrantly contravenes the international obligations and commitments of the Islamic Republic of Iran as set out in the International Covenant on Civil and Political Rights and in the Convention on the Rights of the Child, both of which prohibit the execution of persons convicted of crimes committed when they were minors.

The European Union accordingly condemns the execution on 22 July 2008 of Mr Hassan Mozafari and Mr Rahman Shahidi, who were minors at the time of the acts for which they were convicted.
The European Union urges Iran to respect its international obligations and to take without delay the steps necessary to bring about a stay of execution in the case of Mr Amir Amrollahi and in general of all other persons facing the death penalty for acts committed when they were minors.