Theatres of the Middle Eastern politics 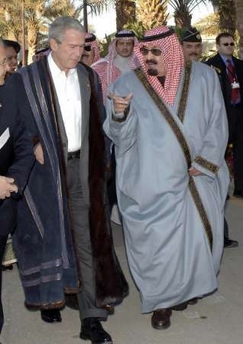 “All the world’s a stage,” and that all men and women in it are “merely players” expressed Shakespeare’s deep conviction that we do not readily escape the roles that are essentially ours. No sphere of human life is more theatrical than politics. And each of us is drawn into an unfolding political drama in which the plot reveals itself to be uncannily repetitive.

The Middle Eastern political stage in which an American president kowtowing to the Saudi monarch seems to repeat itself for as long as there is oil to beg for. A new oil windfall in the Arabian Peninsula and the Persian Gulf, on one hand, and the burden of a great military liberation of Iraq and all its financial costs assumed by the United States, on the other hand, has forced the Americans into begging the Saudis and others, now awash with money, to drop the price of oil. For the Saudis, who have taken in nearly $900 billion in oil revenues the last six years, took no more than an hour to inform them that the oil prices would remain in the invisible hand of market.

In every fundamental ways the Americans did not fully understand the Middle East they sought to change. “Whoever eats the Sultan’s bread fights with the Sultan sword,” goes a Bedouin proverb. Eager to eat the Saudis’ bread soaked in oil, the Americans ended up fighting for their real enemy:

The real enemy in the Global War on Terror is not the Axis of Evil but the Axis of Allies. Today, the countries most likely to produce another 9/11 are not Iran, much less North Korea, but countries long regarded as (after Israel) America’s most reliable allies in the Greater Middle East. Step forward Saudi Arabia (almost certainly still the biggest source of funding for radical Islamists) and Pakistan (very definitely their one-stop shop for nuclear weaponry), Niall Ferguson, 2007.