Behnam Zare was executed without prior notice 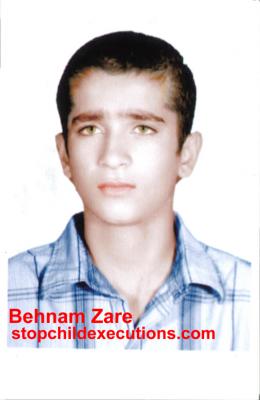 We regret to announce that without any prior notification of his parents or lawyer, Behnam Zare was executed this morning in prison yard of Shiraz prison in Iran. Stop Child Executions strongly condemns execution of Behnam Zare and calls on Islamic regime in Iran to once and for all join the international community and immediately halt all child executions.

Not only Iran is in direct violation of the international conventions (ICCPR and CRC) which prohibit execution of those guilty of crimes before the age of 18, but by not notifying the parents and attorneys, Iran also violates its own laws which requires 48 notice of intent to execute.

Behnam Zare’ was convicted of a murder which reportedly took place on 21 April 2005, when he was 15 years old. He was found to have swung a knife during an argument with a man named Mehrdad, wounding him in the neck. Mehrdad later died in hospital. Behnam Zare`was detained on 13 November 2005; Branch 5 of Fars Criminal Court sentenced him to qesas (retribution) for premeditated murder. Under Article 206 (b) of Iran’s Criminal Code, murder is classed as premeditated “in cases where the murderer intentionally makes an action which is inherently lethal, even if [the murderer] does not intend to kill the person.” The case went to appeal before Branch 33 of the Supreme Court where the sentence was upheld, and it was then passed to the Office for Implementation of Sentences after approval by Iran’s head of Judiciary, Ayatollah Shahrudi.

Iran has executed at least 7 juveniles in 2008: