The Democratic Republic of Qazvin 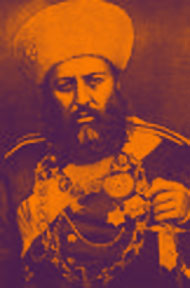 Before there was the Internet or even the steam engine and alike, there was a dynasty ruling over Iran, the Qazar dynasty. And there was a nice chap, a king, named Qazanfareddin Shah Qazar, who inherited the kingdom from his father, Mammad Quli Bay Mirza Zulfaqar Oghlu. Times were peaceful, as the neighbouring kingdoms were fighting each other, so Iran was spared the fuss!

Qazanfareddin Shah was very thoughtful of his subjects. He always listened to his subjects. He was a good king. He was kind to his subjects, but he could not be kind to all his subjects, so he always tried to have some middle ground, some reasonable approach to handling the affairs of the state. He thought he could never be kind to absolutely all his subjects, no matter how he tried, because, despite his inner wishes, some of his subjects were actually thieves or murderers, or preoccupied with other sorts of unclean and socially corrupt activities that either slightly bothered, or deeply affected, a significantly greater number of the remaining subjects! Finding a balance was of course what a sovereign had to do. And Qazanfareddin Shah was quite alright at doing so. He was generally loved and respected, but also feared when needed.

The short history of the Democratic Republic of Qazvin. One day, the people of Qazvin, among whom a few had travelled to England and had heard about democracy, sent a delegation to Qazanfareddin Shah to (kind of) test his love and kindness toward his subjects by asking him to grant them independence so that they could build what they had heard was democracy. The delegation arrived at capital city and, as planned, went to the royal palace, where they were greeted by the Vizier. And the vizier led them to the shah, who received them with smiles, fruits and tea.

Then, the representatives of Qazvin told the shah about their desire to create a democracy in Qazvin, to have elections where ordinary men could participate to choose, or to be chosen, and to have a parliament and so on. The idea seemed amazing, and the shah got really excited about it. He had never heard about such interesting ideas. The shah told the delegates of Qazvin that this might be an extraordinary idea that may later be used for the whole of Iran, and this way he (the king) might actually be spared all the headache of finding all the balance! The shah thought that with an assembly of chosen men to decide who to hang, who to jail, and what to do generally, he would be spared all the nightmare of always thinking where he might have made mistakes! And with the elected officials potentially changing once in every four years the public could oust those who had got the balance wrong, so anger would not boil up, and he would no longer need to execute some viziers once in a while. The idea of democracy, inspired from a distant land called England, seemed quite appealing to the shah. So he granted the delegation of Qazvin all their wishes. He told them to go to Qazvin and feel free to do whatever they want in the path of their ideals. The shah granted Qazvin independence, let the Qazvinis be free; no longer subjects to the Qazar shah. Qazanfareddin shah was proud of his decision and he was just looking forward to see what was going to happen in Qazvin and how this whole democracy thing would fare in that tiny land that once belonged to his kingdom.

A couple of decades went by, and the elected rulers of Qazvin applied their ideas, built a proper democracy, brought their citizens together and built schools, hospitals, and everything they thought their land would need to resemble England, the country some of their sons had seen years before. The Republic of Qazvin prospered and Qazvinis became richer and happier than they used to be, while Iranians did not have much of the same fun, while they had also spent a lot of their wealth and manpower in their wars with a couple of their ambitious neighbours.

Qazanfareddin shah was still in power, and he was still a good shah who always listened to his subjects and tried to find a balance and rule carefully so that his subjects were as happy as they could normally be (in a kingdom that is). One day the people of Karaj (a city neighbouring Qazvin) sent a delegation to the shah, and the thoughtful and good shah, as always, accepted the delegation. The people of Karaj had sent some people to the shah asking his majesty to let them invade and take over Qazvin because the harvest had been quite bad and the shah’s dearest Karaji subjects were in the brink of starvation, while Qazvinis who were no longer part of the kingdom were very rich. Karaj also promised the shah to share the plunder with all the rest of his royal subjects. Although the shah did not really think this was something normal and humanely acceptable, he was facing the desire of his subjects, against some foreigners after-all! He was not a prophet. He was just a mortal ruler who had the duty of serving his subjects! Qazvin was no longer a part of the kingdom, so the shah had no obligation to protect them and care for their good, while Karaj was a part of the kingdom.

So, the story does not have a pretty ending. Iranian history has no mention of Qazvin’s democratic movement, because Iranian historians thought the whole idea of writing about the mass slaughter of a whole population for their wealth would not bode very well for the moral standing of the next Iranian generations. The shah was unhappy after hearing what had happened, so he wept for the ambitious and courageous, but perished, people of Qazvin. But then again, he was no prophet, but a king, just a king who wanted nothing but to serve his subjects. And so he did, as he had always done.